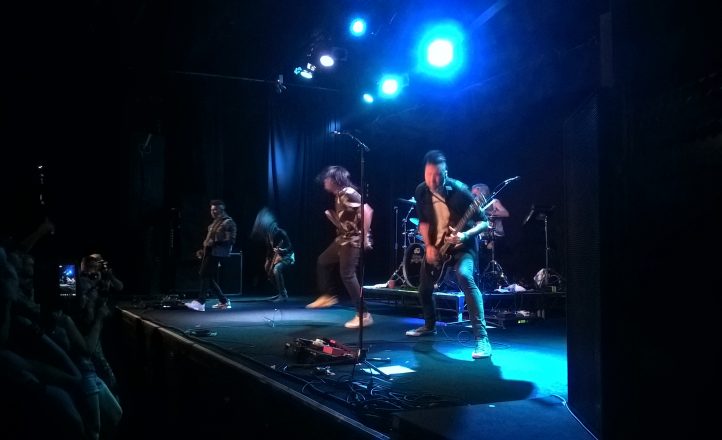 Pop Evil are a seasoned and experienced live act from the States who have toured with some serious heavy hitters. Even with remarkable chart success and a loyal following, their profile in Australia is really only starting to build the foundations needed to achieve the recognition they deserve locally. Still, the existing fans were out in force tonight and they knew Pop Evil were going to deliver a slamming live set. In some regards, the atmosphere felt more like an industry showcase than your typical international gig but those that were present weren’t there out of obligation, they were ready to enjoy a Pop Evil show.

Kicking things off tonight was Sydney band Department of Gloom who do not lack any image considerations even if their music is far removed from anything even remotely demonic and gothic. Rickenbacker sporting bassist and partially dreadlocked front man Leeno Dee has some tongue in cheek humour to keep things moving swiftly with his sound bolstered by the rest of the band including solid drumming and a Dean guitar hammering rhythm guitarist summoning Steve Stevens from the mid-eighties. However, their secret weapon is guitarist Phil Bowley who, despite the makeup, knows his way around the fretboard of his workhorse Telecaster, reverse Strat necked guitar and offers up some strong vocals to go with the brief yet succinct guitar explorations.

The lesson here is not to judge a book by its cover even with eyeliner and feedback howls. The song ‘Precious Love’ being a good example when Bowley casually hit centre stage and added a ripping guitar solo. During the next songs, whilst Dee had his foot on the fold back wedge pumping out the bassline, Bowley twirled, briefly had his guitar behind his head and coaxed feedback squeals nicely. By the end of the set, with some tri-tone riffs and shared microphones for vocal parts as drummer Ajay smashed his cymbals, it was clear that Department of Gloom have rehearsed their set well and look to be very capable of moving up the ranks.

As the PA blasted out Airbourne, the realisation that Bad Moon Born were on next meant any Skid Row fans in the audience might well have been having déjà vu for support acts as the two supports tonight replicated that show six months ago. The difference here though is that Bad Moon Born now have a tasty new six track EP under their belts titled War is One and they were clearly going to play a set that focussed on that recent and solid release. Starting off with a groove vibe within the first song, the five piece had their rhythmic and wah pedal fuelled twin guitar approach from guitarists Voya Miluinovic and Ned Koncar driving the soaring vocals of front man Frank Lakoudis.

Second track ‘Alive?’ had the rhythm section of five-string bassist Nick Allen and drummer John Ezilmez locking the groove down further. After playing the very Audioslave sounding ‘Carry On’ from the Chemical Lullabies EP, some material from their new EP was played. This included the new EP title track, providing more tasteful guitar parts mixed with a crystal clear snare and cymbals sound together with powering vocals which showed the certain trajectory of this band is upwards. It was also entertaining to have Ezilmez and Miluinovic swap their drum and guitar places for a reputable cover of Mötley Crüe’s classic ‘Dr. Feelgood’ even if they probably weren’t of age for Crüe’s first tour here in 1990. To cap off their set, the second single from their EP titled ‘Witch Trials’ added a slower grinding grunge vibe with good percussion. Pretty damned good.
As we waited for Pop Evil to take the stage, the PA volume suddenly increased to crank out the Cheap Trick classic ‘Surrender’ and as the song ended, the band wandered on stage to stake their positions and then let rip into a fiery version of ‘Boss’s Daughter’ from the 2011 War of Angels album. Newest recruit Hayley Cramer’s drumming was powerful from the outset whilst lead guitarist Nick Fuelling and co-founding rhythm guitarist Dave Grahs did not miss a note against the energy of mobile vocalist Leigh Kakaty and prowling bassist Matt DiRito. Following straight into the Rage Against the Machine influenced ‘Colors Bleed’ and then changing guitars for the heavy, down tuned ‘Ex Machina’ track, both from their latest Pop Evil album, the venue was flooded with sound. Plentiful backing vocals added to the chorus push in the songs with DiRito’s microphone facing from stage left of the drum kit.

A combined ‘Deal with the Devil’ from Onyx and cover of the Drowning Pool track ‘Bodies’ punched the energy up a notch with nods to both AIC and nu-metal. Bringing the mood down for a change of pace, ‘Torn to Pieces’ got the crowd interaction happening. A mid set highlight was the fierce ‘Last Man Standing’ from War of Angels combined with a cover portion of Survivor’s enduring massive hit of ‘Eye of the Tiger’. It actually worked quite well and was seamlessly executed including a call and response method.

As the gentle pre-recorded piano parts of ‘A Crime to Remember’ from the latest album segued with the live band, it wasn’t long until material from Up was played, starting with the rapid ‘Ways to Get High’ led by the rhythm section as Kakaty shared backing vocal microphones during the song. The big hit of ‘Be Legendary’ from their self-titled latest album followed during which the band members moved around the stage interacting with both colleagues and audience at ease. Clearly well-rehearsed, the show was second nature to them and won over the audience even with subtle things like Grahs bouncing then catching a guitar pick off a cymbal mid song. To close the main set, two more songs from the album Up followed with the presumably testimonial song ‘Footsteps’ that had audience singalongs and the boisterous song ‘Take It All’ which saw all guitarists facing the drum riser to smash out the riff.

The Pop Evil experience still had an encore to unleash but the expected two big songs ended up being a three song treat. Returning to the stage, Kakaty and Fuelling first appeared to introduce ‘100 in a 55’ from the Lipstick on the Mirror album with an extended introduction thanking the audience about finally playing Australia and visiting various landmarks. A crowd singalong followed before ‘Waking Lions’ returned the set to being ‘fucking heavy’ in Kakaty’s words, as a reinforcement of the value of intimate shows to prove their worth live on the other side of the world.

As Cramer walloped her kit and the band tore into the riffs, Kakaty leapt into the audience with his microphone to run up to the sound desk and back, shaking hands with punters in his travels before returning to the stage. To finish the show, ‘Trenches’ was played with the audience jumping as the bass heavy sliding guitar riffs, smashing drums and vocal lines led the show to a bombastic conclusion. Those present tonight got the rare treat of seeing an arena level live band playing a small club show. Pop Evil are a band that feeds off crowd energy. The die-hards kept up their spirits throughout the set which was a whirlwind hour long package. Hopefully the band will return here to play to a bigger audience. Pop Evil are a band that smash it out live and are well worth seeing.