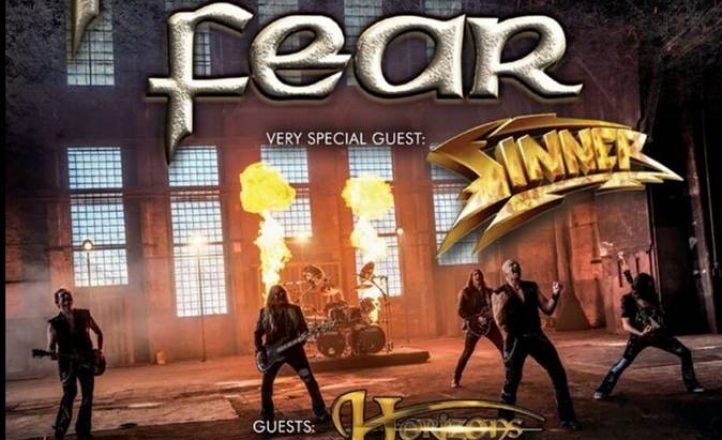 Primal Fear might be seen as Germany’s answer to Judas Priest but their longevity is a testament to their quality output of heavy metal music over the years. They have graced many a huge stage at numerous international festivals of note and have a formidable reputation on the live front. Primal Fear’s second tour here saw them playing a bigger venue but covering just Melbourne and Sydney venues with bassist Mat Sinner’s other band Sinner in the headlining support slot.

It is no reflection on the quality of Primal Fear’s music that crowd numbers tonight were borderline abysmal for an international act as the venue was half filled. Primal Fear might return down the track on a co-headlining tour but it’s a safe bet that Australia won’t see Sinner again soon based on the numbers. Still, those present enjoyed a top notch metal show from one of Germany’s finest heavy metal bands and their professionalism was indeed impressive.

Melbourne’s Horizons Edge delivered their swift brand of power metal first up. Sadly, courtesy of City Rail, this reviewer missed the bulk of their support arriving at venue just as they were rounding off their set. Undoubtedly they put on a great show and what was heard emanating from the venue on approach sounded good and well arranged with some soaring vocals from the skimpily dressed front woman Kat Sproule. The five-piece will hopefully be back in Sydney at some point and with a bigger window of time to play more tunes. Those present seemed pretty happy with Horizons Edge as there were plenty of enthused responses.

Sinner were on next and once they were onstage it became apparent that some members other than Sinner himself would be doing double duty with Primal Fear this evening. The band is basically Mat Sinner’s project and hail back from the very early Eighties when taste and subtlety had very little presence in a lot of the heavy metal around at the time. Having said that, they’ve put out a stack of albums and have no intention of straying from their straight forward heavy metal formula.

The twin guitar attack consisted of Tom Naumann from Primal Fear and Alex Scholpp who plays for both Tarja Turunen and Farmer Boys. Both guitarists have great command of the instrument with Naumann more melodic in approach compared to Scholpp’s technical mastery and fast paced leads. Sinner stood centre stage delivering strong vocals and powering bass lines with ease and added good humoured banter during the set. During ‘Comin’ Out Fighting’ and within ‘Born to Rock’ several tracks in, guitar solos were traded whilst during ‘Bad Girl’, another tack from Touch Of Sin, there was more twin guitar harmonising parts. Throughout, drummer Fracesco Jovino, also from Primal Fear, provided a hard hitting and precise playing via his well-equipped drum kit. His snare sound cracked nicely in the venue and worked well with Sinner’s bass delivery.
The title track from recent album Tequila Suicide showed Sinner’s love of heavy metal and hard rock was still alive and well but it was the Danger Zone title track with Italian female backing vocalist [one of two situated at a makeshift bar on stage] Giorgia Colleluori on lead vocals that was a revelation. She absolutely nailed every note and did so with strength plus with fantastic stage presence working in unison with Sinner who clearly relished having her talents within the band.

The following two tracks were ‘Concrete Jungle’ and ‘Knife in My Heart’, both from Dangerous Charm and whilst obviously a quite dated, still delivered some entertaining music, some falsetto vocals and various amusing interactions between the guitarists. A reputable cover of Billy Idol’s ‘Rebel Yell’ with nifty guitar soloing from Scholpp was followed by the equally direct ‘Germany Rocks’, both tracks from Comin’ Out Fighting. The latter included the return of Colleluori, sharing lead vocals with Sinner. To close the set, Colleluori took on vocal duties for a rollicking rendition of Led Zeppelin’s ‘Rock and Roll’. It went down a storm with plenty of audience interaction, raised fists, clapping and singing along. Sinner put on a great fifty minute set that was fun and simply entertained.

The tour was in support of latest album Apocalypse so the opening introduction piece ‘Apocalypse (Intro)’ set the mood as the band walked on to take up their places. On cue, the twin guitars of Alex Beyrodt and Naumann cranked out the older track ‘Final Embrace’ as the well-built Ralf Scheepers strolled on to sing confidently with high screams, sustained vocal technique and amiable stage presence acknowledging fans. Backing vocals from bassist Sinner and drummer Jovino gave Scheepers room to sing with his stylistic embellishments that were quite simply astonishing.

A couple more tracks from the latest album were played with the Eastern tinged ‘Hounds of Justice’ first, including a whipping double kick drumming plus a fast solo from Naumann. Harmony guitars featured during ‘The Ritual’ with Scheepers letting out an almighty applause inducing yell during the outro. More harmony guitar lines were present during the slower paced, more melodic ‘Under Your Spell’ from Jaws of Death plus some skilled guitar playing as the two guitarists quickly switched pickup selectors whilst trading rhythm and soloing parts.

The Nuclear Fire title track had audience sing-alongs before the song launched into the full paced onslaught and was soon followed by latest album epic track ‘Eye of the Storm’ with another audience chorus sing-along. The slower song was full of great drumming with cymbal work, fills and solid snare hits. ‘King of Madness’ was largely vocal driven with crowd chants and was a solid driving metal track, slightly marred by tone deaf audience members. ‘The End Is Near’ from Rulebreaker was a master class in metal drumming, tight bass runs, synchronised guitar soloing and vocal prowess swiftly followed by standout Delivering the Black track of ‘When Death Comes Knocking’ with both guitarists again harmonising brilliantly.

To close the main set, it was naturally the classic track ‘Metal Is Forever’, the empowering opening track from Devil’s Ground. ‘In Metal We Trust’ from Rulebreaker delivered all the German power metal goodness in one breakneck hit. As the final notes rang out, Primal Fear wrapped up a fantastic ninety minute set and the audience chanted for more. Primal Fear were excellent tonight and very few bands could deliver with that sort of precise power and tight musicianship on a nightly basis. Any self-respecting metaller into power metal and heavy metal that missed this show should kick themselves. When it comes to heavy metal vocals, Scheepers is up there with the very best.
Final Embrace
Chainbreaker
Blood, Sweat & Fear
Face the Emptiness
Hounds of Justice
The Ritual
Under Your Spell
Nuclear Fire
Eye of the Storm
King of Madness
The End is Near
When Death Comes Knocking
Metal is Forever
—
Fighting the Darkness
In Metal We Trust