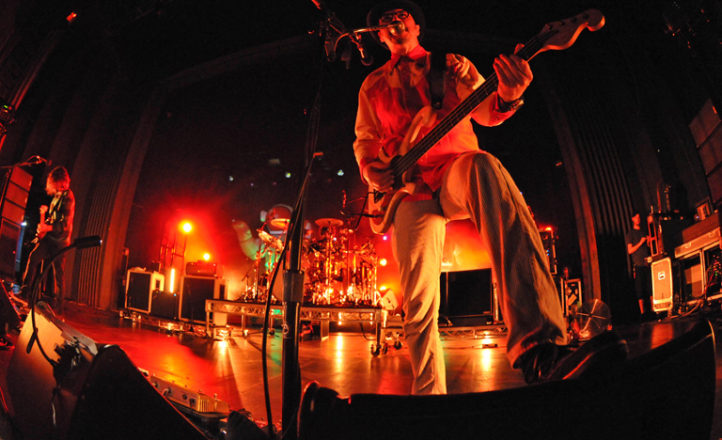 Tonight’s performances by two of the current Soundwave tour’s most popular bands started much earlier than many were used to, but it would be hard to imagine a better-paired bill and it was apparent even before the doors opened that this was close to a full house.

Indeed, the Enmore was wall to wall when Melvins kicked off at 7.30, directly into their set without pause for ceremony. Dale Crover and Coady Willis’ side-by-side, inter-connected drum kits dominated centre stage as Buzz Osbourne and Jared Warren fired off the riffs from either end, opening with the introductory salvo of “Water Glass” and “Evil New War God” from last year’s The Bride Screamed Murder. As fairly regular and recent visitors to these shores, the quartet kept mostly to their latter releases but they were playing to the truly converted this evening so the crowd hung on every note, fuzzed out riff and King Buzzo snarl. Having two drummers keep perfect time is hard enough, yet not only do Crover and Willis pull this off with ease, they also play counterpoint. It’s amazing to behold, even more so when you realise they are occasionally sharing the vocal duties as well. Buzzo pounds his guitar into submission as he chops out the sludge or shoots off a stuttering lead break, stepping up to the mic once in a while to bark out some lyrics or share a melody with Warren. Letting the music do the talking for the whole set, they closed with “The Bit” before farewelling the crowd courtesy of some nice four-part vocal harmonies with the Sha Na Na standard “Goodnite, Sweetheart, Goodnite”.

Primus has been away from Australia for a long time, but their fans have not deserted them. If the room had been full for Melvins, it was bursting at the seams when the projectors started rolling film onto the visors of the giant inflatable astronauts at the back of the stage and “Seas of Cheese” began ringing out across the darkened room. From that moment it was very clear that something special was about to take place. As Primus took a turn into “Here Come the Bastards”, the lights revealed a Les Claypool looking rather like a tawdry cross between Charlie Chaplin and Frank Zappa, and a band that was about the lead the audience through an 80-minute odyssey of jazzy improv and funkadelic metallic progressive rock. With their first album in a decade almost in the bag, Primus even previewed one of the tracks, “The Last Salmon Man”, a new entry in the Fisherman Chronicles while for the most part sticking to tunes from Frizzle Fry and Sailing the Seas of Cheese.

While there are three people in this band, the focus is invariably on Claypool’s astonishing mastery of the bass guitar, his innovative playing and dazzling array of tricks a captivating spectacle. With a dexterity and technical ability more usually seen in lead guitarists, Claypool simply boggles the mind with his fluid finger-tapping displays and flamenco strumming on his enormous, plank-like six-string bass but unlike a flashy guitarist, he never overplays. His showiness is always carefully controlled and then he tempers it with his oblique, Zappaesque humour. Larry LaLonde pulls a few slick moves of his own, stabbing out jagged jazz-fusion licks and Jay Lane somehow steers the ship through the dextrous improvisation from the other two. Midway through the set, he takes the lead for a moment until Claypool, donning a full-face chimp mask, joins him with his Whamola for a percussive jam before “Jerry Was a Race Car Driver” sent the crowd into raptures. A homage to one of their most obvious influences came when they worked Pink Floyd’s “Money” into a medley with “Harold of the Rocks” and continued to weave it through “Golden Boy” and “Too Many Puppies”. With that, Primus concluded their show, leaving everybody in little doubt they had just seen two of the most amazing bands in the world play one of the most mind-blowing concerts they will ever experience.

Primus:
Seas of Cheese
Here Come the Bastards
Groundhog’s Day
Those Damned Blue Collar Tweekers
Frizzle Fry
The Last Salmon Man
Over the Falls
Drum and Whamola Jam
Jerry Was a Race Car Driver
Over the Electric Grapevine
Eleven
Money/Harold of the Rocks
Golden Boy
Too Many Puppies/Money