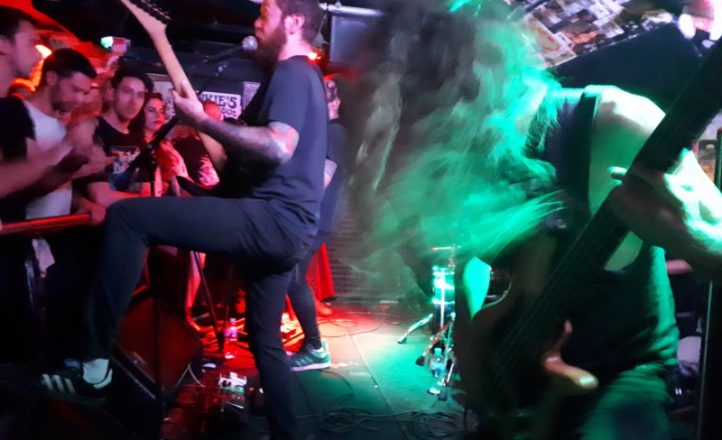 A week out from their shows with Ihsahn and Belphegor, Revocation were in town for the second of two warm-up shows and to help launch a new beer for the venue, and a large crowd defied Sydney’s apparent Sunday night hoodoo to join the fun.

First up were perennial live machine Black Rheno who weren’t about to be hemmed in by the barricade around the stage at the back of the room. Within moments of the opening riffs, Mila had hurdled it and was running around the place, firing up the crowd for what was to come. As busy as they’ve been over the past two years, the lads have managed to find time to put together some new stuff and dish some of it out tonight, including a couple of slower tunes that only add to their dynamic.

The anticipation was palpable for Revocation, last in Australia just over a year ago and ready for another Down Under assault. Wasting no time, the four piece tore into the crowd with deadly precision. Revocation were simply ferocious, clobbering riffs and blazing solos from David Davidson and Dan Gargiulo ripping through the room. Both traded epic solos and vocals duties during a punishing and entertaining display of death/thrash metal dexterity.

Psycroptic are such a consistently strong live band that they are almost beyond reviewing at this point of their career. They rarely drop the ball and tonight was no exception. Still on a high from playing in front of a massive crowd at Download and gearing up for further overseas action, Psycroptic were once again the well-drilled and oiled death metal machine they have the reputation as, Jason Peppiatt roaring over Joe Haley’s constantly changing riff array and brother Dave’s pummelling onslaught. A perfect Sunday night’s metal entertainment.