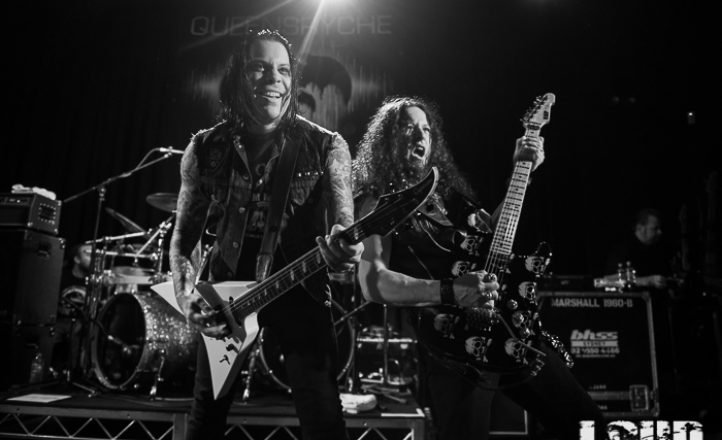 Rivers of ink have been spilled about the drama between Queensrÿche and their former frontman, and this isn’t the place to revisit them – this is about the band as it is now, and that’s almost certainly what the greater percentage of the crowd here in Sydney was here to see too. From the dude in the Panama hat and NRMA shirt right at the front to the woman in the white pants next to the desk who was flailing her entire body around for the whole set, there was little doubt that very few could care less about the Tate/Ryche wars this evening. This was about the music – heavy fucking metal.

Sydney proggers Hemina had kicked off the night strongly, celebrating the imminent release of their third album with two- and occasionally three-part vocal melodies, harmonised guitar solos and impressive drumming chops. For a band running through what amounted to little more than a vocal PA every note was clear and every instrument well balanced. A good performance from a band with a solid grip on its craft.

Scene veterans LORD opened for Queensrÿche on their last tour and were taking the stage again this evening, playing their first show ever without bass player Andy Dowling who is honeymooning in Europe. With Carbon Black’s Rob Giles in his place, LORD’s set was shorter than expected but no less energetic and fun as they roused the crowd into singalongs with favourites like “Terrano del Mar” and “Set in Stone” before ending with a furious cover of “Creeping Death” with Mark Furtner on vocals. Despite lacking some their usual nuances because of on-stage restrictions, LORD was as entertaining as always – although Dowling’s back-ups were sorely missed.

Queensrÿche weren’t for spending a lot of money on production if the rather underwhelming backdrop was any indication, but that was about to make no difference. Condition Human‘s “Guardian” kicks off the set and so it should, a great track from one of the best albums this band’s done in ages. The roar goes up from the crowd as Todd La Torre almost casually stamps his authority on “Operation Mindcrime”, winning their acceptance almost immediately. “Best I Can” makes a surprise if welcome early appearance next and any doubt that might have remained is swept away in a sea of voices. This is not a crowd who just showed up in the last few years. There are some absolutely bolted-on Queensrÿche devotees here tonight. They know every word, every nuance of delivery and La Torre doesn’t let them down. Onstage the band is having a whale of a time as they drop in an occasional new cut like “Eye9” among a string of pearls like “Empire” and “The Mission”. They are faultless in their precision, from Scott Rockenfield’s drumming prowess to the twin guitar team of Michael Wilton and Parker Lundgren, and they are clearly enjoying every moment.

Then comes that moment, that pinnacle of a band’s performance that leaves you talking about it for years afterward. “Queen of the Reich” is so commanding and La Torre’s note-perfect delivery so on-point it’s like Geoff Tate never existed. “Jet City Woman” raises the roof yet again, the audience in thrall at a deeply skilled and dynamic band that has regained the passion for what they do. The encore of “Eyes of a Stranger” with La Torre hitting stratospheric heights draws rapturous applause from an enraptured crowd and while it seems like it’s over too soon there’s no disappointment – the crowd disperse after a performance as close to perfect as it will ever come.

Guardian
Operation: Mindcrime
Best I Can
Damaged
The Killing Words
The Mission
Silent Lucidity
Empire
Eye9
Queen of the Reich
Jet City Woman
Take Hold of the Flame
—
Screaming in Digital
Eyes of a Stranger