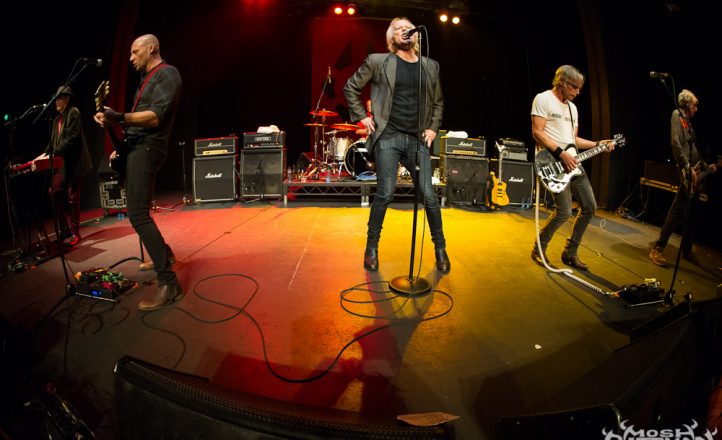 The Enmore has seen some large crowds before but there wasn’t much wiggle room left here this evening when two legends of Australian rock lined up to unleash their magic. There were three really, with Kim Salmon cutting a lone figure on the Enmore’s huge stage to open proceedings accompanied only by his guitar. Even when he’s completely alone, Salmon is still quite capable of making an incredible noise as he experiments with feedback and tape loops and it’s clear his unique musical vision has confounded many. That’s what he does.

Quite different from their co-headlining cohorts but in many ways cut from the same cloth, Died Pretty wasted no time filling the Enmore with their warm, melodic and at times atmospheric rock. Ron S. Peno is still one of great frontmen of Australian rock, moving around the stage with an agility the envy of most men his vintage. The band has lost none of the charm that made them one of the most revered indie acts of the 80s and 90s. ‘Stops n’ Starts’ chimes in early to get the crowd into dance mode and the capacity Enmore audience is wrapped in the Died Pretty spell as favourites like ‘Harness Up’ and the perennial ‘Blue Sky Day’ bring back memories. Peno is in glorious form and the audience makes them all feel more than welcome, refusing to let them go until they’ve come back for an encore.

If Died Pretty had been the main attraction for a percentage of the crowd, none of them were ready to go home yet. The place was still wall to wall when, with as much fanfare as the previous band had offered, Radio Birdman walked out and ripped straight into a 13th Floor Elevators cover to get their set underway. ‘Do the Pop’ comes next, rallying the crowd into singalong mode.

The band aren’t as young or as dynamic as they once were of course but Deniz Tek is still low over his guitar, throwing it around and Rob Younger is up for a bit of a jig. Pip Hoyle calls a brief halt to dedicate a song to his late son early on; ‘Descent into the Maelstrom’ and ‘Man With Golden Helmet’ get a warm response from the Enmore crowd and the younger members in the middle of the press are stirring a mosh as the band seem to turn the energy levels up more as the set goes on. Radio Birdman are locked tight, Tek and Dave Kettley playing off each other as they peel off solos. Younger doesn’t say much: “Thank you” and “Two more” are about the extent of his repertee. ‘Hand of Law’ descends with a snippet of the Atlantics’ ‘Pipeline’ throw in and the agitation continues with ‘New Race’ closing the set. There’s almost no pause before the stage lights go back up for ‘Aloha Steve and Danno’ and a thunderous version of ‘TV Eye’ brings the night to a close. Together, two of Australia’s best ever bands prove that age is no barrier to cranking out a few hours of sweaty rock and roll. We should all hope they’ve both got a few miles left in the tank yet.