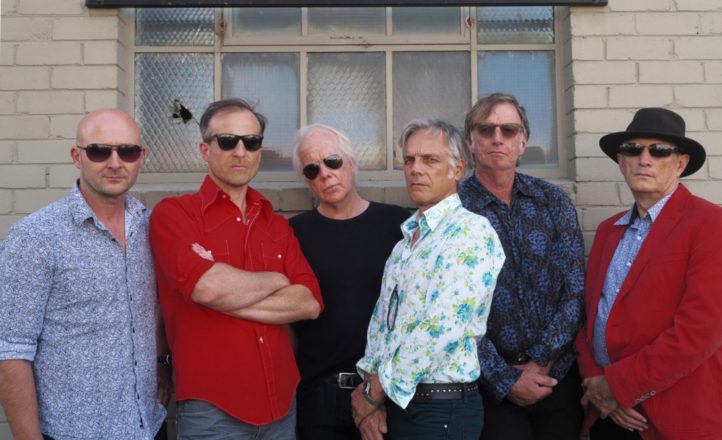 Radio Birdman have been actively touring again of late with overseas festivals continuing to offer them an ever increasing audience. Even if they do attract a certain vintage of punter locally, there is no shortage of younger attendees checking out what all the fuss is about, awaiting the six piece in a live setting for what is potentially Radio Birdman’s only local shows for 2016. On a rainy night in Sydney which was a precursor to a weekend of torrential rain, this latest gathering of the faithful, eager to catch the closest thing currently possible to constitute a band reunion meant the gig was sold out well in advance. Plenty of souvenirs were available at the merchandise stand including the individual CDs and vinyl reissues.

Wandering in early to catch the support acts, the strikingly bold red and black Birdman logo backdrop hovered in the back promising punk rock joys in the not too distant future. Opening the night, The On and Ons offered up their jangly pop rock with conviction in their first song for the night, ‘All Over Heavenly’ following swiftly by ‘Goodbye My Love’. Fronted by guitarist Glenn Morris from The Screaming Tribesmen and with his brother Brian on drums, their rehearsed sound was tight and punchy.

By the fourth song, ‘Long Ride’, their rhythmic pace had picked up and the Hoodoo Gurus vibe was evident; not surprising given their bassist is Clyde Bramley from said band. With their three guitar lineup consisting of two Telecasters and Rickenbacker, the five piece had both drive and pop in their sound from the brightness of those styles of guitar. The songs ‘No Good’, ‘Rockin’ With The Beat’ and ‘Sugar Anne’ bounced along nicely. Closing their half hour support set with ‘Stupid Girl’, The On and Ons showed how simple melodies spiced up with quick guitar solos repeated an octave above and drum rolls, made for some great, happy musical entertainment.

Second on the bill tonight was Melbourne based garage rock four piece Magic Bones who drifted between various styles ranging from surf punk to short, sharp punk outbursts. Further confusing things, the band members regularly swapped instruments and lead vocals. However, once they got into the vibe of the room, their lyrical simplicity and repetitive riffs seemed to win over the crowd who probably took them in as familiarity with The Vines and The White Stripes made their sound easier to digest.

Songs such as ‘Anytime Anywhere’, ‘Shake Your Bones’ and ‘Danger I Am’ offered a cross between the more restrained experimental aspects of Sonic Youth and to more straight ahead pop rock. Ending their set with a song about devils inhabiting pajama pants, some enthused vocals, staccato guitar notes and drums fills melded with guitar chord slashes. Their sound is a mishmash of influences with a penchant for jumping between styles but still managing to find a catchy chorus or enough repetition to find a good hook. Speeding up to a bombastic conclusion, the band delivered a fairly decent fifty minute set overall.

As impossibly difficult jazz music wafted over the PA whilst the changeover of the stage for the headliners took effect, the venue filled up to capacity. Soon enough, the mighty Birdman casually wandered on stage, plugged in and proceeded to open their set with ‘Crying Sun’ from what was tentatively for many years, almost their posthumous 1981 release Living Eyes. They followed with ‘Smith and Wesson Blues’ from their debut Burn My Eye EP, offering a fast paced song delivery and some great expressive guitar soloing from guitarist Deniz Tek who weaved effortlessly around the stage.

Deniz slinked with ease into his guitar parts with authority and his use of wide vibrato pushed the raw guitar sound which subtly teetered towards a feedback howl on occasion. He continued to peel off some ripping riffs and solos in the classics ‘Do the Pop’ and ‘Non Stop Girls’ from their influential 1977 debut album Radios Appear. Songs from the 2006 reunion album, Zeno Beach got an airing next with ‘The Brotherhood of Al Wazah’ which had Deniz offering up some harmony guitar lines on a red Stratocaster styled guitar before returning to his signature Salvi model and Epiphone Crestwood guitars.

‘We’ve Come So Far (To Be Here Today)’ also had some variety to it as second guitarist Dave Kettley from the New Christs slashed away at power chords. Given the song was bookended by I-94, again from the Burn My Eye EP and ‘Iskender Time’ from Living Eyes, there was a slightly different rhythmic approach between older and newer material with the latter being less aggressive. As per the last tour, Chris Masuak was nowhere to be seen which no doubt continues to disappoint some fans and purists. Still, vocalist Rob Younger was in command of the crowd, swaying and moving hypnotically as Deniz rocked out on songs such as Descent into the Maelstrom and Anglo Girl Desire.

During the performance, there were various cover songs thrown in for good measure which allowed the rhythm section of bassist Jim Dickson bass and Nik Rieth on drums to play more freely such as on the Blue Öyster Cult and Beatles tracks chosen to play. During their own song, ‘More Fun’, a stage diver got a full kick from Deniz who returned to his guitar duties unperturbed. Of course, the main set closer of ‘Aloha Steve & Danno’ was welcomed to rapturous applause as the excited audience sang the lyrics back to Rob. The song also benefited from embellishments of Phillip ‘Pip’ Hoyle’s organ playing providing a solid sonic bed [and loud suited attire] whilst the guitar riffs lead the charge.

After the main set clocked up a solid hour, it was time for first encore. After a quick tune up, ‘455 SD’ from Living Eyes kicked it off with suitable urgency. Rolling drums, sharply played chords and a big chorus being the neat structural backbone to deliver another blast of sonic fun. It was followed seamlessly by an extended rendition of Hand of Law from Radios Appear during which guitars screeched beautifully with a surf guitar vibe and the chorus had the crowd singing along until the rhythm section edged the song into a sudden conclusion. As loud, slashing guitar power chords ushered in another cover song in the form of ‘You’re Gonna Miss Me’ by 13th Floor Elevators, bass and keys opened up the musical space before the rhythm guitar attack resumed to deliver fast, sustained, ringing chords. Meanwhile, Deniz improvised some blues punk guitar patterns, wild unison bends and pentatonic runs.

Now with a second encore evidently upon us, the crowd yelled for the band to return and without too much prompting they set the mood as a keyboard sound swelled to introduce the powerful guitars of Dark Surprise during which Deniz unleashed a stunning outro guitar solo that shrieked and moaned. Another cover song from the sixties in the form of ‘Time Won’t Let Me’ by The Outsiders had a poppy vibe to it with some almost country style guitar techniques interspersed with punk pop and harmony vocals. Naturally, the evening was concluded with the rollicking, caustic classic Radios Appear album closing track, ‘New Race’. Fast, repetitive with intent and rounded off by a shouted chorus that captured the audience in full vocal participation mode, it was the perfect conclusion to the show.

Ninety minutes of raw, unbridled, unfiltered and punk rock from the pioneers of the scene proved that Radio Birdman are justifiably celebrated as a no nonsense musical powerhouse. To see them still hammering away at this stage of life and doing so with an effective, direct sound is a blessing for Australian live music fans. Radio Birdman still deliver live and they do so brilliantly.