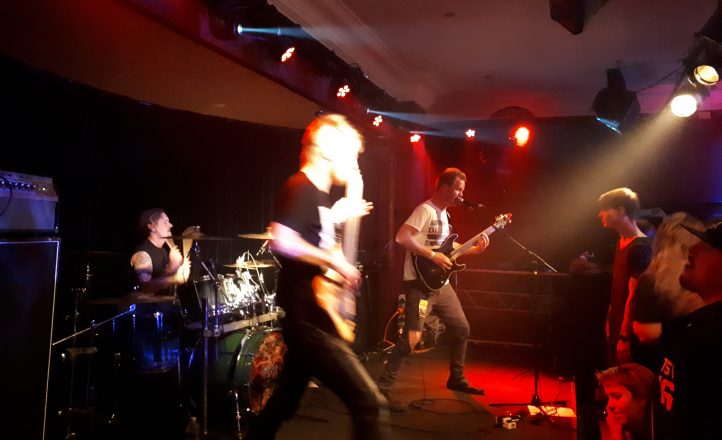 It’s been six years since Katoomba metal machine Red Bee released their debut and on the occasion of the release of a new single they made a live return to their hometown this evening.

The Gearins have made huge improvements to their band room recently, adding a wider stage and a modern LED lighting array, resurfacing the floor and moving the sound desk, finally giving it the feel of a real venue. Importantly, there was also a pretty good turn out.

First up tonight was Quoll, a two piece in cowled robes who filled the room with an avant garde experimental sound reminiscent of a less-refined Dumbsaint, less cinematic and more drone-inspired, with minimalist vocals and held together with some very good stickswork that carried enough groove to keep things moving along.

Paperhill was next, fronted by Oliver Morley-Sattler who, still in his early 20s has already been in more bands in the local area than most people go to see in a year, usually as a drummer. Another two piece, Paperhill’s style is upbeat 90s-influenced rock in the vein of You Am I, with Morley-Sattler proving himself to be an affable and engaging frontman as he cut the moves on a very sparkly guitar.

While the openers got plenty of support from the crowd, this was Red Bee’s night and they had the room’s full attention as they hit the stage with their characteristic energy and charisma. I’ve been following this band for a very long time and watched them move through several musical shifts, showing themselves to be adept at any style they choose to inhabit. Their latest material has more of a rock flavour than the techy Ictus period of 2011, but they haven’t abandoned the tricky moves altogether. They also remain masters stagecraft, with neither of the Silk brothers standing still for longer than a few seconds or less. After only a couple of songs, frontman Dan is virtually in the crowd, looming over the punters at the foot of the stage while working through a series of choppy riffs and subtle melodies. The popular ‘Chokehold’ shows the transition point between the rockier new single ‘Dead Inside’ and older complexities such as ‘Dark Daze’ and ‘Road Kill’ but even the new songs gain a rousing reception from the crowd. Red Bee shows an uncanny and inherent ability to maintain a level of songwriting consistency with each guise and are still – perhaps even more so – a very impressive and energetic live band.