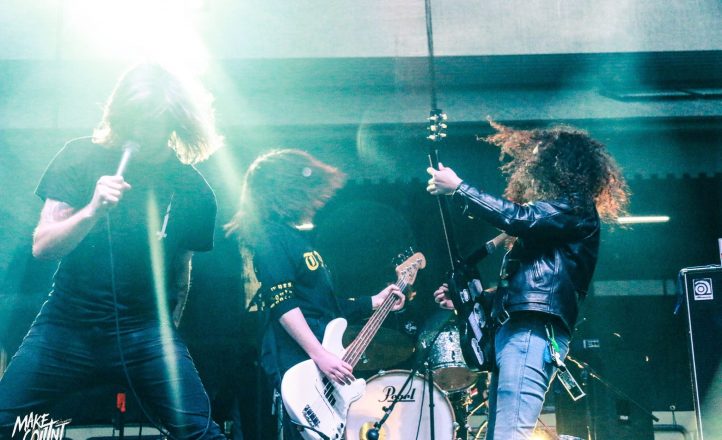 Tucked away in the retro of Lithgow’s industrial suburbia, 20 bands heralded in punters from all walks of life to see the brandishing of guitars, basses, and drumsticks in the place better known for the wielding of swords, lances and muskets at the town’s annual Ironfest, Tony Luchetti Sports Ground, but today for the Resilience Music Festival.

Though the morning took its time for crowd sizes to truly flesh out for feeding that festival vibe, many contemporary performers like Kaziah, Swell Triplex, Quoll and Earprojector were undeterred, delivering equally memorable and enjoyable sets before clumped wanderings of rock fans. The venue’s main hall was crammed with stalls armed with resources for advocating mental health awareness, suicide prevention and building ‘resilience’, the unifying, underlying themes for this festival. A nearby indoor stage saw, through the day, speakers such as the esteemed Nic Newling and a magician share their stories of overcoming mental issues, with a corner devoted to a local barber salon offering haircuts and styles.

Never too early not to be head banging, hooded duo Quoll landed on main stage at 11:45 to bring their special brand of ominous technical metal ringing over the vast pasture in the shadows of the looming mountains. At the secondary smaller stage, experienced power-trio the K.T.B Project made their live debut at 1PM, bringing a unique set of retro rock ’n’ roll, double kick shuffle and superb covers including Alice In Chains’ ‘Man in the Box’. Self-described as rough, ready and full of charm, the crowd truly enjoyed themselves despite singer/guitarist Ben Sorenson battling off a flu, and with some equipment malfunctions for drummer Tubby Wadsworth (Massappeal, Killing Time), his first time back on the professional stage in six years. 18-year old bass prodigy Koyla Chan swapped to guitar towards the end of the set for a blistering jam medley of ‘Crossroads’ and ‘I’m Going Home’, vocals provided. In a day truly defined by ‘firsts’ for the town, German rocker Kalle Kalkowski was onstage two acts earlier, wrapping up a regional tour that brought him all the way from Berlin.

At three in the afternoon after the hardcore of Homesick, the brutality and musical diversity of Red Bee got things ignited at the significantly more fleshed out main stage, the same time I was requested backstage for an impromptu interview with Hellions’ Matthew Gravolin. Releasing their fourth record Rue on October 19th, such busy times for Hellions made their appearance at Resilience a surprise, though Matt says ‘It was easy, it’s a two-hour trek from the Blacktown area but it was a scenic drive, you guys have a beautiful area round here.’

The intense emotional themes reflected in the album title tied in with Hellions’ urge to play the charity festival, ‘relating to a feeling of regret and sadness and also of compassion’, the same feelings Lithgow must have felt in the wake of the recent suicide spike that inspired Resilience. Confirming my guess, Matt says ‘That was a big motivator in us coming out to play this today. I mean for us, that was the main thing.’

Reflecting on the stylistic change for Rue infollowing up to 2016’s Opera Oblivia and the imminent future of Hellions, Matt reveals ‘I’d say the last one was us finding our identity. We’ve been on this theatrical sort of feeling, and that led us to find who we are as a band. We’ve really just built on that theatricality to where we’ve fully discovered our sound.’

‘We’ve got a small headline run in the capitals, so we’ll do Brisbane, Melbourne, Sydney in smallish rooms, so it’s nice to have those intimate gigs every now and again. After that we’ve got Unify festival in January, which will be great, which is in South Melbourne I believe. And then after that we’re gonna see how the record rolls, we’re just discussing a few things at the moment but nothing is in concrete.’

From backstage to main stage again and Red Bee were halfway through a typically tight and crushing set to showcase some new material from their latest LP Silent Enemy.

A significant shift came straight after with esteemed Blacktown MC and Snoop Dogg, Hopsin, and Kerser collaborator Fortay At Large taking over the stage with Top Dawg and a squad of street-hardened rhyme spitters. Simultaneously over on second stage, Stu G’s Cloak and Dagger had finished up and local groove metal thrash act Be Faced were halfway through a blazing setlist. Melbourne punk act Clowns had called me over for an outdoor chinwag with drummer Jake Laderman and guitarist Will Robinson, a couple of hours before their set on main stage.

Focused on living up their ‘nice little weekend’ on the road, one was curious as to what had drawn the group interstate, at the end of the album cycle for 2017’s Lucid Again. Drummer Jake explained ‘We have been keeping somewhat quiet apart from our own shows of late, but this is a show that is for a very good cause. Mental health is something related to people that we’re very close to and it’s a cause that we really wanted to support. It’s affected our friends and we’ve had friends that have passed away from mental health issues, so getting behind it and raising awareness is a great thing. That’s what this festival does.’

As a wild party band that exploded out of the Melbourne punk scene to find opportunities sharing bills with NOFX (‘Fat Mike used the shower in our dressing room when we opened for them and he walked out naked’), Descendents, Weezer and Foo Fighters, ‘a total dream come true’, I was curious as to whether Clowns prefer larger or smaller venues for their music.

Will tells me ‘I totally like both. I like everything. I don’t think playing bigger shows deters from the small ones, the small ones are still sick.’

‘I agree completely’, says Jake, ‘sometimes its better playing at small, 100-capacity, packed venues where everyones going fucking crazy, to a ginormous festival somewhere where people might not know you and its kind of a bit more tame, but it really depends on the energy.’

On the topic of the diversity of Resilience, Will says, ‘That’s one of the things I like to see.’

‘I’d rather that than watching ten punk bands in a row, personally’, adds Jake. ‘We just like good vibes at our shows, we like everyone looking like they’re having a good time. I think we’re a very positive band.’

After the mosh dust had settled and the rap smoke had cleared, it was time for the heavy hitters on main stage, kicking off with alt-metal act She Cries Wolf. Now getting to the headliners, beloved YouTube sensation The Chats were borrowing gear from Clowns to let rip on a bonafide ‘boganified’, sun fried set, as the rain began to fall. Speaking of the weather, the sports ground was subjected to four seasons in one day, with an overcast morning breaking to sun, rain, gloom and drizzle to a clear and cold night.

Powering through such tracks as ‘Pub Feed’, ‘Temperature’, and the iconic ‘Smoko’, a range of fan favourites from their inspiring three-year career, self-described ‘shed rockers’ Matt, Josh and Eamon looked content in their premiere Lithgow show. Clowns, next up, one of the finest punk exports from Melbourne, decimated the stage and whipped up the audience into a chalk-bomb throwing, rowdy moshing frenzy, long hair whipping with vocalist Stevie Williams prowling, stomping and bouncing around, fired up from the crowd’s reaction. The five-piece barrelled through a no-frills set of dark crusty chords and relentless downbeats to offer up one of the most energetic sets of the day.

A moment’s respite from the chaos came when music organiser Sam Williams took the mic for main stage from our Newcastle-based MC, who had shared his own scrapes with depression. Sam was there to introduce Hellions before Tonight Alive but also delivered some deeply moving words on his own struggles with overcoming serious mental health issues. You have to gather the ammunition, re-read positive dialogue like a text book and know how to tell your toxic inner voice to shut up when you hear it pipe up, Sam was saying.

‘After a few years of re-reading my book 100 times, it became quicker and easier to get through and now I don’t have to tell this voice to be silent, I can just break its fucking arm.’

The rapturous applause rewarding the bravery of this man for such deep insights really encapsulated the selfless community spirit that fuelled the whole event. After such moving words, we were given two more chances to free ourselves from any residual negativity with equally uplifting sets from Hellions and pop punk-cum-stadium rockers Tonight Alive, both acts cathartically cleansing the crowd with their heartfelt energy. For the finale of Resilience, Greg McManus and the other three main organisers took to the stage to thank the crowd and themselves for turning the spark of such a bold and unique concept into reality. And then it was over… but not before a large majority of the crowd could take valuable information with them out through the exit. Thus, after successfully bringing significant bands to Lithgow and raising many numerous dollars for suicide prevention, the final goal for Resilience 2018 was fulfilled, of raising mental health awareness.

Next stop? Celebrating in a pub after party to hair metal cover band Glam Jam.

Here’s hoping Resilience can be maintained as an annual event, to keep fighting those inner demons and to build a legacy from this remarkable first day.