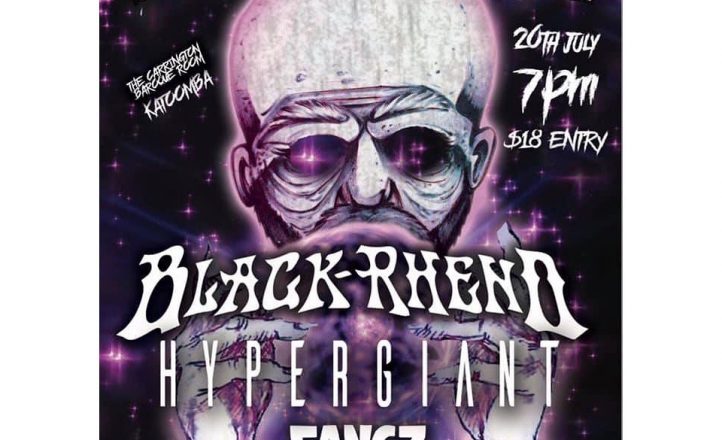 It’s the middle of winter at the top of the Blue Mountains but the line-up at the Baroque tonight was red hot with four bands bringing the rock in various ways across the course of the evening.

Local two-piece Paperhill were more than warming up the crowd early on. The most personal of local musician Oliver Morley-Sattler’s myriad bands and musical projects, they ripped through a fiercely-played set of early-grunge inspired garage rock with a sharp guitar tone cutting through a heavy wash of distortion and gravelly vocals. It was a big sound for a band made up of only drums and guitar.

Fangz hit the stage next and smashed out a set of high-energy rock and roll shenanigans complete with their hyperactive back-flipping Canadian vocalist, beer-slamming guitarist and bass player in matching black track-suits, animalistic drummer and a wild Grinspoon cover. Flat out punk rock came thick and fast with beer showering all over the stage and much of the crowd as Fangz force-fed their ultimate party rock antics on a more than willing audience. Heaps of fun.

A change of pace now followed. Huge mesmerising grooves engulfed the room as Hypergiant unfurled their monstrously riffing, cosmic psychedelic doom. Hypergiant’s heady mix of doom and space rock was a slow-burning energy-release compared to the other bands on the bill, but they still managed to get the crowd moving, headbanging and swaying hypnotically to enormous, spellbinding riffs and epic songs.

It’s rare when Black Rheno fails to inspire a moshpit, and tonight was not going to be one of those times. Katoomba is probably one of the few places on the south east coast that this band hasn’t been to before, but their reputation had obviously preceded them. No sooner had they hit the stage than there was a surge to the front half of the room, some wags decided to pull the curtains across to cut off the bar area, and mayhem reigned as the Baroque moved and slammed to Black Rheno’s hard-hitting, heavy-riffing sludgey groove. Always on the move, frontman Ryan Miller doesn’t have a balcony to  launch himself from tonight but that’s no barrier to his hyper-exuberant performance, a ceaseless ball of energy fuelled by the furious output of his team-mates Doug Martin and Mariano Palomares. In top form as always, Black Rheno topped off a night of top-shelf local metal and the solid turn out should hopefully ensure more evenings like it in the future.