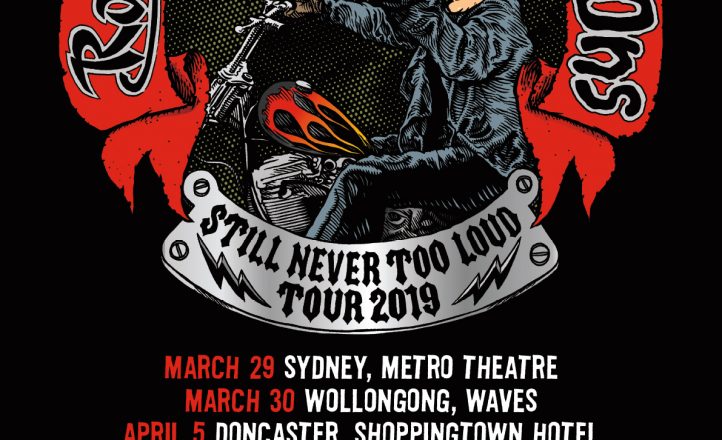 Tonight’s meeting of two of Australia’s greatest rock n’ roll minds was both disparate and perfect as bands from different ends of the spectrum met on the same stage for the first time in their illustrious careers on the opening date of a ten show tour.

While they’ve never exactly gone away, the Hard-Ons seem to have undergone a resurgence of late and hit the stage in a flurry of energy. The first song is really just a huge, noisy jam as the band furiously beset their instruments. There are two Hard-Ons, the buzzsaw poppish punk one and the ear-shredding metal version. Tonight the metal version was on stage.

No longer constrained by the drumkit, Keish obviously revels in his role as the band’s front man now, although he doesn’t actually sing all that much and his vocals are buried in the mix. His lifelong sidekicks are both blurs of thrashing limbs and hair. Blackie doesn’t so much play his guitar. Slung way low, he attacks it, unleashing squalls of noise and messy, crazy solos. Ray throws his bass around, plays it behind his back and tosses it in the air, not just once in a while – all the time. Behind them, Murray Ruse keeps everything anchored somehow, barely raising a sweat. With minimalist lyrics and songs that evolve on stage into enormous wild, jams, Keish barely has to sing a note most of the time so he dances around. Two-thirds into the show and Ray dedicates a song to his late father and for a couple of minutes the entire gig becomes a celebration of the man’s life. Their set cannons toward the end in an explosion of noise – the Hard-Ons have lost nothing over the years in either vitality or sonic violence.

Rose Tattoo enter together, a band of rock n roll survivors and the son of a rock n roll survivor, casually taking over the stage from a  whirlwind of fury and introducing themselves by way of “One of the Boys”. Angry Anderson, contentious, unapologetic, lets loose with a rasping wail that shows little sign of age. He is literally the last man standing of the classic line-up of one of the hardest heavy rocking machines of all time but the band around him tonight is still a formidable one. On one side is long-time wingman Dai Prichard whose slide guitar battles against the murky mix all evening, on the other are Mark Evans and Bob Spencer with a world of rock history between them, now writing a few more pages as they rip into “Juice on the Loose”. Jackie Barnes hammers the kit while the band crisscross the stage, cutting loose, draping themselves over each other, mugging and stepping up to back up Angry. For his own part, the singer looks knackered after a couple of songs but the guys break into an extended jam during “The Butcher and Fast Eddy”, giving him time to recover.

There’s a couple of other extended pieces too, some tweaking and re-arrangements that wouldn’t have stood in Wells’ and Cocks’ day, but that was sadly long ago. The sound is bad but the Tatts make the most of it, Angry clutching his Stones bottle while the band veer through the classics. There’s a little less of the old swagger and not as much of the swing, but “Astra Wally” gives the room a grand lesson in rock and roll.

Angry Anderson’s personal politics may often be less than palatable, but this evening the only politics was that of good, sweaty rock n’ roll from two of the country’s greatest bands.