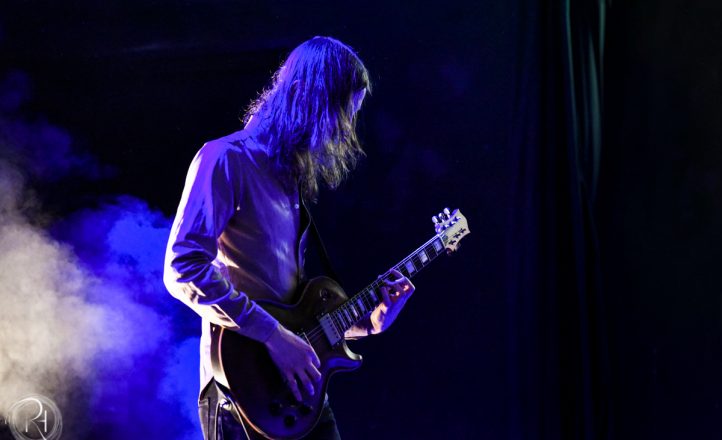 The substantial gathering outside, prior to doors even opening, was a good
sign for what we were about to witness. The waiting game we play before a
show is a delicious part of the gig night experience. Hearing the sound
checks from drums and guitars rumbling inside the venue helps generate
eager anticipation amongst the sea of black garbed fans.

With barely enough time to get inside, and many still queuing for their
first beer, Tangled Thoughts of Leaving explode out of the gates with their
first song; a strong start to the night and immediately grabbed our
collective attention. From the hard-hitting female drummer to the playful
and experimental keyboard solos there was truly a lot going on between
songs and even progressions within individual songs. Allowing each member the opportunity to shine was a brilliantly executed pendulum of the
spotlight; with all eyes front until the last note.

We Lost the Sea are visually an incredible sight to behold on stage with
their six strong line-up. The band has been able to transform themselves
after losing their lead singer to suicide in 2013 and has emerged with an
orchestral and emotional weight to the delivery of their performance. After
announcing themselves, making their considerable presence known, they
continued with a slower pace, teasing us with trance inducing and building
melodies. Anticipation is generated on this audible journey to a threshold
is before smashing the atmos with their full and tremendous force.

Russian Circles are an impressive three piece from Chicago and last toured
our southern shores back in 2014, leaving a lasting mark on those of us
that were there. It’s also great to see plenty of young new faces scattered
through the group and easy to understand why with their six exceptional
albums. Opening with ‘Deficit’ from their album Memorial gave us an immediate reminder of why we’d come tonight. The room erupted into roars from the crowd and moved into the slow and synchronised group head bang as the sound filled the space.

Unfortunately, a technical failure played some havoc very early in the set.
You could be forgiven for not knowing anything had happened for quite some time as Mike and Dave masterfully adjusted the flow mid song, gradually steering us into an unscripted and extended interlude. In fact, you could feel the room offering its full support and patience while Brian Cook
conducted open heart surgery with his gear; impressive stuff in poor
lighting and under such pressure. Rather than produce any distress, it
served to give us an important insight into all that goes into producing
the amazingly complex sound Russian Circles has crafted and refined over
more than a decade.

It was absolutely worth the wait to break straight into ‘309’ from their
album Empros. Bands that can bring something extra to the table for their
gigs are special and while the studio album lives on repeat in many of our
collections, it’s moments like this that they really earn their place in
our memories for stand out concerts. When the show resumed, we were treated with their very best of comprising a heavy and intricate display of
auditory hypnosis. The transitions between songs tease and trick us to keep
us guessing until the last possible moment, when that familiar note plays
and we know what’s coming, letting it wash over us.

A phenomenal night with a stellar line-up. These bands are perfect examples of the enormous diversity of within their genre. It’s also why we need to support live music in Sydney and ensure we keep venues open for them to continue coming back to.