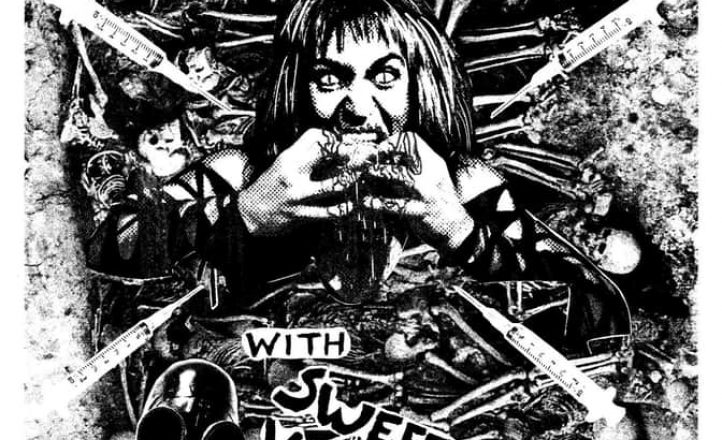 Live music is back in Sydney, and Frankie’s under Hunter Street is again showing their support with a full agenda of gigs right through the next few months. After hosting Fangz’ latest EP launch a couple of weeks back, this evening it is the return show for Sabïre on Australian soil.

Being a free venue with a first-come-best-dressed policy, it was prudent to arrive pretty early now the capacity has been reduced from 400 to 70 (seated only), and as excited as I was to catch my first live music since March, it fucking sucks to be able to do not much more than sit at a table for a couple of hours until the bands actually start. Frankie’s always have a pretty riotous playlist going, but the music is so loud you can’t even have a conversation unless you shout yourself hoarse and strain your hearing, and there’s no screens or anything to watch, so the wait was pretty brutal even if the pizza I had wasn’t bad.

Close to two hours after getting there, the curtains opened onto the hilariously-named Sweet Velvet, who turned out to be one of the most curiously inept bands I’ve ever seen. If it wasn’t the strangely passionless, unconvincing vocal performance, the bad drumming, all-round missed cues and clearly under-rehearsed material, it was the songs themselves, songs that would pass as ridiculous parodies if they weren’t being played so straight. Had they been a comedy act, they could have almost pulled it off, if that act had consisted of dedicating songs they didn’t seem to know very well to a punter celebrating a birthday, the drummer constantly making mistakes, a disastrous cover of Electric Dreams that was like something blink-182 would do but much, much shittier, and the guitarist pulling out of a solo to wildly motion to the singer to get back on the stage from wherever the fuck he was. In fact, the guitarist was the only guy who seemed to know what he was doing, but I could be wrong about that because he obviously either doesn’t realise or doesn’t care that he’s far too good to actually be in this band. After closing the set with the longest ever crescendo ending by any band ever, Sweet Velvet finally went away. A five month live music drought broken by a group I would have normally walked out on, except I couldn’t because I wouldn’t have been allowed back inside.

Almost any band that came on next would have been little short of amazing after such a performance, but fortunately for us that next band was Sabïre, although I do wish they hadn’t taken almost an hour to come on because, as mentioned, sitting in the dark watching people slowly getting drunk while deafeningly loud 80s metal blasts away constantly actually does get a bit tiresome. Still, having waited six months for a live music fix, a little longer wasn’t going to kill me.

Sabïre bill themselves as ‘pure concentrated acid metal’, which as far as I know isn’t a thing, unless it’s something Scarlett Monastyrski made up to describe his band. But that’s ok, because Sabïre are cool. The curtain draws back and they instantly rip into some tight, heavy classic-style metal, Scarlett looking something like London-era Blackie Lawless and the balance of his group, three quarters of the former Devine Electric line-up, donning leather and studs. Musically and visually straight out of the 80s, but unlike the openers, this was from the good half of the decade. Sabïre is glammed-up punkish metal, a sort of mash-up of Priest and Kiss’ more metal pretensions with early Sunset Strip flash and grit and Motörhead’s raw power. Paul Corben’s drum sound was huge behind the synchronised guitar poses and thunderous bass rumble. Scarlett is just about the perfect frontman – a mix of showmanship, confidence and affected swaggering arrogance – at one point loading a huge water gun with vodka and roaming the room spraying it into the willing mouths of punters. It was probably not the cleverest stunt to pull during a pandemic even if there was no actual contact involved but by now no one seemed to care. Sabïre was so good they made the long wait and stupid opening act nothing but distant memories, a European festival performance somehow squeezed onto a stage in a Sydney basement in killer fashion.