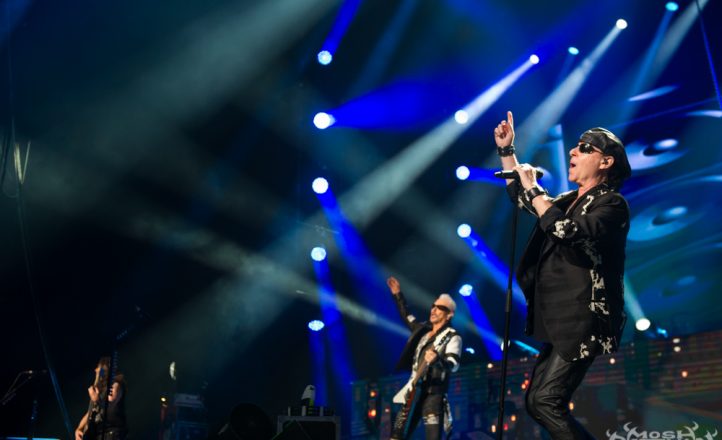 Rescheduling a show from a weekend to mid-week is fraught with danger, particularly in Sydney where people are generally reluctant to step outside after dark between Sunday and Thursday. Yet this was the hand dealt by fate when Scorpions’ singer Klaus Meine was laid low by kidney stones ahead of their Sydney show, so tonight’s performance was on quite literally a school night for my 11 year old companion, hugely excited about his first metal concert.

Both bands were making adequate use of the space afforded in the cavernous QUDOS Arena, with a long catwalk into the middle of the floor area and towering screens bracketing the stage. For their part, Whitesnake kept things fairly simple, a straight-ahead rock show resplendent with big rock radio hits and stellar musicianship from some of the best in the business. Tommy Aldridge behind the kit was nothing short of amazing, a blur of arms and curly locks, smashing home every beat with the unbridled energy of dudes a third his age but with the skill of a lifelong veteran. His Bonham-esque bare-handed solo spot mid-set was a showstopper. Ditto for the extended guitar duel between Reb Beach and Joel Hoekstra, trading off shred parts before stepping into the centre platform and peeling off a wildly distorted version of Waltzing Matilda.

Consummate frontman David Coverdale led his crew through a career-spanning setlist from Bad Boys to Slow an’ Easy to Fool for Your Loving and Ain’t No Love in the Heart of the City. Coverdale plays his rock star role to the hilt, doing that thing with his mic stand perhaps a dozen times – it was literally the first thing he did when he walked out on stage – and leading the crowd through every song with genuine warmth and enthusiasm. But there wasn’t a lot of power in his voice and his range was shot, with Hoekstra doing a lot of the high notes, and he seemed to be struggling at times to keep up to the pace of a show being driven by a set of gun musicians. The crowd, obviously diehards whose knowledge of the band extended beyond 1987‘s enduring hits, nevertheless ate everything up, including the boy beside me who was throwing the horns and grinning deliriously the whole time.

By contrast, the Scorpions put on a complete spectacle from the very first moment. Their performance was a nonstop rollercoaster ride of rock and roll showmanship and energy. Rudolf Schenker is in ridiculously good shape for a guy on the wrong side of 70, a towering whirlwind of energy stomping the stage, mouth constantly open in a wide grin. After he and Matthias Jabs introduced themselves with a flurry of screaming notes and guitar moves, Klaus Meine stepped up and effortlessly unleashed a voice of incredible power that resonated across the arena. His vocal seems to have lost nothing, even less than a week after keyhole surgery, leaving the showmanship to the manic guitarist pairing as he delivered each lyric loud and clear.

Scorpions live shows have been legendary since this reviewer was in high school, and tonight we got to see the proof of the pudding. As the lads cranked up the heaviness factor with The Zoo, the lights and screens blared with seizure-inducing strobing and blinding visuals, almost too bright to look at. Schenker and Jabs were indomitable, Meine strapping on a guitar to join them and bassist Paweł Mąciwoda in the centre of the arena with a fearsome guitar-army array through Coast to Coast and a long and varied medley of 70s workouts that included Steamrock Fever, Speedy’s Coming and Catch Your Train. Newer track We Built This House was so catchy it got the entire room singing along, then the band changed gear dramatically, dedicating the Crazy World ballad Send Me An Angel to the country’s fire fighters and wildlife rescuers. Few bands do both power ballads and massive arena metal as well as the Scorpions, and there are few ballads that carry the emotional weight of the song they played next. Wind of Change is as much a song of hope now as it was 30 years ago and it certainly brought a tear to my eye with one of the song’s children of tomorrow sitting beside me in a type of hushed awe at the command this band has over even such an enormous room.

And it was also exactly because of him that we had to say goodnight at that point. Even rock n roll children get sleepy, especially when they’re only 11, but we did get to hear Mikkey Dee’s huge drum spot echoing around the arena as we departed. It was a bit of a shame, because the Scorpions were astoundingly good – maybe one of the best live acts I’ve ever seen and one that may not pass this way again, but one that I am supremely glad I finally got to witness. Going out with a bang, indeed.

Whitesnake:
Bad Boys
Slide it In
Love Ain’t No Stranger
Hey You (Make Me Rock)
Slow an’ Easy
Ain’t No Love in the Heart of the City
Trouble is Your Middle Name
Beach/Hoesktra Guitar Attack
Shut Up & Kiss Me
Drum Solo
Is This Love
Fool For Your Loving
Give Me All Your Love
Here I Go Again
Still of the Night

Scorpions:
Going Out With a Bang
Make it Real
The Zoo
Coast to Coast
Top of the Bill/Steamrock Fever/Speedy’s Coming/Catch Your Train
We Built This House
Delicate Dance
Send Me an Angel
Wind of Change
Tease Me Please Me
Drum Solo
Blackout
Big City Nights
—
Still Loving You
Rock You Like a Hurricane