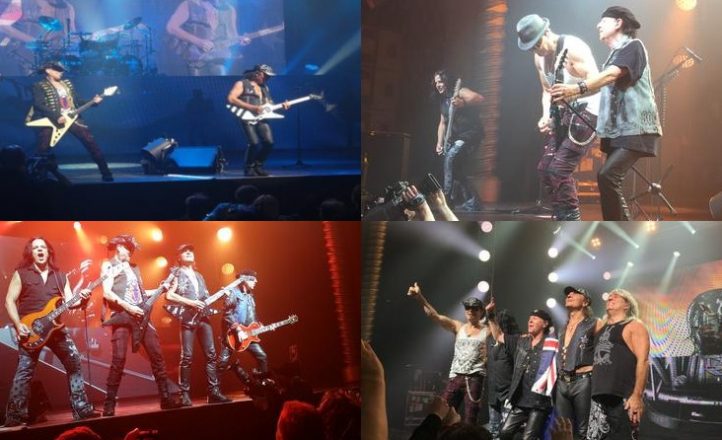 It’s kind of ridiculous when you think in a career that has spanned 50 years, the Scorpions, one of the most successful and heavy unit shifters in the entire hard rock universe are finally making their way down under and are playing their very first and what will probably prove to be only ever show on Australian soil. On what is their farewell run around in support of what they are saying is to be their final album of an illustrious, long and incredibly successful career the metal gods have deemed it time that the German powerhouse finally bless our shores with their enigmatic presence. They have been touring internationally since the late 60s and having sold in excess of 100 million albums they are one of hard rock/ heavy metal’s most popular bands ever. That popularity today translates into a packed and heaving Palais Theatre of long suffering fans who never thought they would see this day come to fruition.

The venue sold out months ago and why in Christ’s name this event did not happen many years ago is singularly down to a long history of promoters who have had no idea of the value of such cornerstone acts to the hard rock faithful. It is a travesty of near Orwellian proportions that these guys have not been here several times already and one gets the impression that they are finally here as it’s their last chance on the way out the door. A headlining trek to smash the Loud Park lineup in Japan has allowed the opportunity to finally get them here. They can surely command a king’s ransom as financial guarantee to play shows anywhere in the world but the fact this show sold out so quickly and a fair proportion of those attending are interstate and international visitors shows they could have played venues twice this size in multiple cities.

The positive flipside to this is that such oversights have fueled many to international adventures to necessitate catching some of these foundation artists and additionally tonight to see such a major, important act in an intimate 3,000 capacity venue is a rare and unique treat. This is a dream show for the eternally patient hordes lucky enough to be attending tonight and the excitement that has enveloped this impressive and ornate theatre is palpable.

Bursting onto the stage with a forceful entry they kick off with ‘Going Out With a Bang’ lead track from latest album Return To Forever. Immediately evident is the energy and professionalism with which they approach their performance, helped along by a blazing and colourful presentation and sound that grabs you in all the right places. It is obvious from the start that the production value of tonight’s show is top notch and there is a vital punch to proceedings that will leave any doubters floored by the impact.

‘Make it Real’ brings the early arrival of the essential old school material and the reaction to this and ‘The Zoo’ show the crowd are very aware of how deep and far back the quality runs with this band. After so many years in the game they have reached a level of stagecraft that has become second nature and as they blast into instrumental guitar feast ‘Coast to Coast’ the interplay between Rudolf Schenker and Matthias Jabs is a show in itself. Rudolf the slightly wack rhythm stunt guitar and Matthias’ lyrical, melodic lead work are complementary genius.

Dipping further into their rich back catalogue we get the unexpected early show highlight of a medley of 70s material. ‘Top of the Bill/Steam Rock Fever/Speedy’s Coming/Catch Your Train’ hark back to a formative time and they attack these songs with a freshness and agility that is way more than a mere nod to the past and it is positively thrilling to be witness to this material nigh on 40 years from inception. It is more than apparent that any intention these guys have of retirement is surely premature and unfounded. As if to reinforce this they smash any thought of nostalgia with new track ‘We Built This House’ which straddles the considerable time gap admirably and Matthias prods and jabs us with his impressive extended guitar solo. The level of musicianship on display from the entire band is flawless, Klaus is in great voice, guitars are abrasive and in your face and the rhythm section is rock solid, early on it is apparent the recent, now-permanent addition of Mikkey Dee behind the kit is a shrewd move and a great double kick up the backside.

A mid show acoustic set allows the euphoric audience the opportunity to give a little back and offers a dynamic respite from the early blast, the onslaught to follow and allows the band time for a few deep breathes. These guys have throughout their career been masters of the power ballad, right from the early days they’ve been plying their considerable skills as lovelorn, history documenting ballad writers and they pretty much wrote the handbook for the acoustic intro/big hook chorus/emotive guitar solo template that became the rock band power ballad that was such a formula for success in the 80s and 90s. Although I’m not often excited by the prospect of a hard rock/metal band going anywhere near a midset unplugged type showcase, the Scorpions have a number of great songs built for this treatment and this dynamic shift proves to be another highlight of this astonishing performance. ‘Always Somewhere’ from ’79s Lovedrive album is proof positive that they had this formula down close to 40 years ago and gets the aisles singing and swaying, on stage splayed legs and power chords are front and centre.

It is commendable and telling of their contemporary value that they choose to play 4 tracks tonight from their latest album and as newie ‘Eye of the Storm’ segues into ‘Send Me an Angel’ and the inevitable pied piper call of ‘Winds Of Change’ the audience are in rapture. As I survey the pleasure fest that is the crowd I notice the woman next to me has tears streaming down her ecstatic face, as I offer her a tissue, she hugs me and screams about “a dream come true” and I am struck for a moment by the memories and emotion that this music can so powerfully stir in people.

‘Rock N Roll Band’ blasts us back to rocking reality with its tale of the swashbuckling adventure of life in a band and the explosive ‘Dynamite’ pulls us back to 82 for the run home with the first of a string of songs that are surely some of the best that catchy 80s hard rock has to offer. But first there is time for a touching tribute, as they pause to introduce the mighty Mikkey Dee and timeout for a nod of respect for his previous band Motorhead and the untimely passing of Lemmy, he launches into the double kick frenzy of the ‘Heads ‘Overkill’ and as the band join in effigies of Lemmy appear on the screens. A nice touch and from the kick ass cover I never thought I’d witness Mikkey takes charge for a literally blinding drum solo that pummels the senses. The full band appears back on stage and there is no let up as they cannon into ‘Blackout’ with Rudolf, a sprightly 68 years young, running around the stage like a maniac with one of his seemingly endless selection of Flying v guitars billowing smoke behind him. The rarely played ‘No One Like You’ is a hooky highlight, a personal favourite and as ‘Big City Lights’ brings the main set to a blistering close the whole theatre is in raucous unison and the look of pure joy amongst the crowd is a pleasure to behold.

This crowd will not be letting them away easily, they demand more and the band return for a resounding encore. They ease into what must be the mother of all emotion driven, heart string tugging pieces in heavy rock history, ‘Still Loving You’ is embraced like a long lost lover and as I check in with my neighbour, happy waterworks are in full flow and the power ballad has claimed another victim. Powerful stuff !

As the unmistakable riff of ‘Rock You Like A Hurricane’ bounces around this lush venue the high energy level the crowd has maintained from the first note reaches a fever pitch, we are indeed being rocked by a force of nature and this punchy sing along provides the perfect ending for what has surely been a perfect show.

This band has had one of the most important and successful careers in the history of hard rock/heavy metal, they’ve maintained a standard of songwriting and performance that remains undiminished to this day and any thoughts they may have of retirement should be put on hold immediately for the good of hard rocking crowds everywhere.

All talk after the show is of “gig of the year” proportions and rightly so. I’m biased, I love this band but I can say this was unequivocally, undeniably and hands down one of the best shows I’ve ever seen. Stunning!