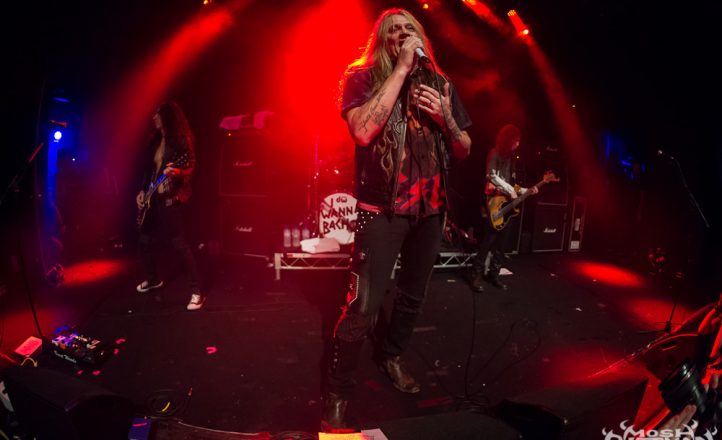 Hosting the apparently ever-popular Sebastian Bach at the relatively intimate Manning Bar ensured a sell-out weeks from the show and made life interesting for those who wanted to grab a quick beer or two ahead of the main event as the bar queue snaked across the back wall of the room almost all the way to the foyer. One of the good things about the Manning though is that there’s still a good sightline to the stage even when lining up for a bevvy, so opening band Gypsy were afforded a decent crowd as they whipped through a Kiss-inspired performance, right down to the singer’s Stanley-esque banter and the melody line in one song that sounded like ‘Detroit Rock City’ (which they followed up with an actual Kiss song, ‘Love Gun’). For such a young band playing to such a huge crowd they acquitted themselves quite well but perhaps a little more originality wouldn’t go astray.

Sebastian Bach opened his set in an understated way with a cover of the Hendrix tune ‘Little Wing’ and then the ballad ‘Breakdown’ to ease himself into it; later, he explained that the death of Nick Menza was his inspiration for not going hard from the first moment. Indeed it was five songs into the set before ‘Slave to the Grind’ ripped the roof off the Manning, although Bach’s voice had already hit the ceiling during ‘I Remember You’. Almost 50, he’s lost none of the range or power of his voice – in fact he seems to have gained a powerful gravelly lower note that came into play a few time during the night. An engaging and charismatic performer, Bach was rarely still and never quiet. Between every song there’s a reminisce, a back story or a shout-out, and yet the set never loses momentum. Before anyone knew it he was into ‘Sweet Little Sister’ and the show was half over.

It was a truly dynamic performance with no bells and whistles but the charisma of Bach himself and his killer team of sidemen – Brent Woods, Rob de Luca and Bobby Jarzombek. He dedicated ‘In a Darkened Room’ to Dimebag and sang the praises of our great Australian rockers, gave a tip of the hat to his famed countrymen Rush with a segue from ‘Monkey Business’ to ‘Tom Sawyer’ and back, and pulled off an acapella medley of ‘Rock and Roll Outlaw’ and ‘We Can’t be Beaten’ before closing the night with a cover of ‘TNT’. In the sweat box the Manning had become neither he nor his band faltered and the crowd were swept right along with them to the closing notes. This was a consummate performance from an artist as ageless as he is a talented showman. It’s no surprise we keep wanting him to come back. 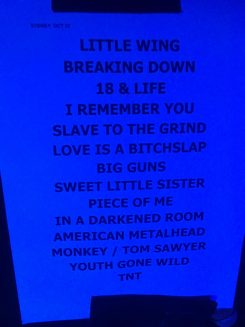