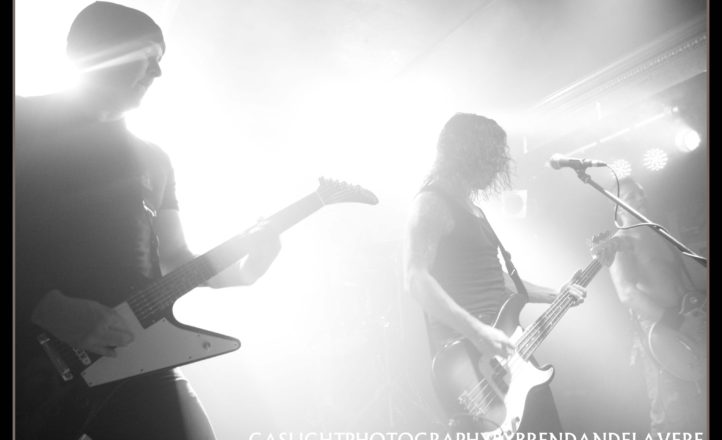 For the second Friday in a row I found myself at the Annandale for what promised to be a huge night of local metal. The first show of Segression’s first headlining tour since 2003 started off on a low-key note however with onlly a handful of people in attendance when Our Last Enemy hit the stage just before 8. Having just come off a tour of their own last week, it was no surprise that these guys tore into their set with fervour as if the place was wall-to-wall and not, as it was, essentially empty. Their industrial-tinged modern metal is well-developed and mature and their visuals and energy makes them a worthy live band; this is the second time I’ve seen them this year play to almost no one which is a dire shame but it’s a testament to their professionalism that again they didn’t just treat this like a rehearsal.

Contrive’s reception when last I saw them appearing with Devin Townsend was lukewarm to say the least. Tonight a much small crowd was rather more receptive, even if the audience was still standoff-ish. Over the years this band has come up with a style that shifts between groove-laden metalcore and more expansive progressive moments; tonight they stuck mostly to the heavier side of things with a straight-up metal barrage they did get a few heads moving. The crowd had warmed considerably by the end to the point where some of them even took a few steps toward the front when Paul Haug beckoned them up for their last song, rounding out a nice solid set.

For some reason Dreadnaught remains a somewhat under-appreciated band in Sydney and I simply can’t fathom why. They don’t so much as play their songs as unleash them and they hit the stage like it’s the last time they’ll ever do so, their tunes a potent mix of grooving hard rock and angry thrash metal with more hooks in each than some bands can write on a whole album. Greg Trull delivers each line of ragefests like “The Push”, “The Gobbler” and “10x the Pain” like a snake spitting venom while the guitar team of Richie Poate and Damon Alcock pepper the crowd with bristling melodic licks and grooves and by the time they hammered out “Buried” to wrap things up, the Annandale was more than prepared for the headliners.

Then it was time for Segression and they hit the place with all guns blazing, opening fire with the stomping “Blood Lace Black Day” and it was like they had never been away,  yet they were also a band reborn. Gone were the multiple effects racks, the seven-string guitars and the colourful gridiron shirts, and in their place was raw passion, energy and sweat. “Ramrod” and “The Thickening” fed the crowd’s hunger for classics before the breakdown-laden “Let Me Be Me” and new album highlight “Candleneck” showed the strength of their new stuff in the live setting. Only two tracks from Never Dead missed out on an airing tonight, with “Reality Playground” a nice change of pace in the middle of the set and proving how much more Segression has matured since 2003. Always gregarious with the crowd, Chris Rand thanked everyone several times for welcoming them back and for making their new album so successful in only a short time. We were repaid with scorching versions of “Priority of Vengeance”, the “Hero Anthem” single and “Dr A Hype” before leaving the stage for a (very) quick breather, returning to flatten us all with “5th of the 5th”. On just their first show in six months Segression was already on fire and reminded us what a powerful and devastating live band they were, and are again.