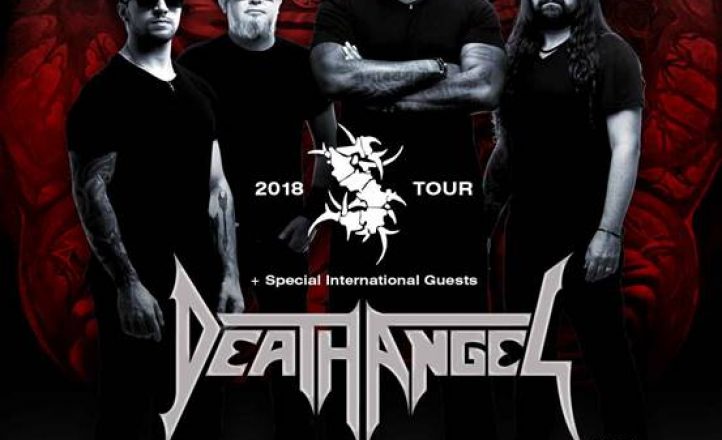 Sepultura and Death Angel are pretty big names in the metal world having both been around now for more than 30 years. They both know how to bring the noise to their baying crowds of eager metalheads.

Kicking off the thrash tonight is Byron Bay natives From Crisis To Collapse, a band that, through nothing more than my at times pointed ignorance, I have missed and if you haven’t heard of this band I suggest you look them up because they may well be the next big thing. Playing something that from the pit sounds like Lamb Of God taking a more Swedish approach like early The Haunted or In Flames, making a new form of noise that I am not sure any other band has tapped into yet and with it the band managed to fill the room as well as the bands they opened for.

As Death Angel make their way onto the stage the only thing visible in the darkened room is the red lights on the neck of Ted Aguilar’s guitar standing out brightly. The band are intense from the beginning opening with ‘This Dream Calls For Blood’ and playing through some of their best known tracks finishing on ‘The Moth’ from latest release The Evil Divide.  Vocalist Mark Osegueda is in career best form, surprising some of the people with me with the power he still possesses.

After the usual changeover the chants of ‘Sepultura!’ grew increasingly louder once the lights went down. As the band came bounding out of the darkness they tore straight into two tracks from newest album Machine Messiah, ‘I Am The Enemy’ and ‘Phantom Self’, letting the Brisbane crowd know that they meant business and even though they have been around a long time they weren’t here to just play a greatest hits set.

In celebration of Derrick Green’s 20th year in the band they did use the middle of the set to focus on a few songs from the Against album, and they went down an absolute treat with ‘Choke’ getting one of the biggest reactions of the night. The only real down was when they chose to slow the set right down by playing the dirgey ‘Machine Messiah’ and followed it with the instrumental ‘Iceberg Dances’, and without the imposing stage presence of Derrick the energy just disappeared.

Do you know how to bring back a peak of energy? If you are Sepultura, ‘Refuse/Resist’. That’s how. The band left the stage soon after, before reappearing to the baying crowd and playing ‘Resistant Parasites’ then wrapping their set up in traditional fashion with ‘Ratamahatta’ and ‘Roots’, both songs that still hold such power.

If Sepultura still had any doubters at the beginning of the night, they certainly didn’t by the end of their set, leaving those assembled on the floor breathless and thoroughly entertained.

Death Angel:
The Dream Calls For Blood
Claws in So Deep
Seemingly Endless Time
The Ultra-Violence/Thrown to the Wolves
Mistress of Pain
13th Floor
The Moth