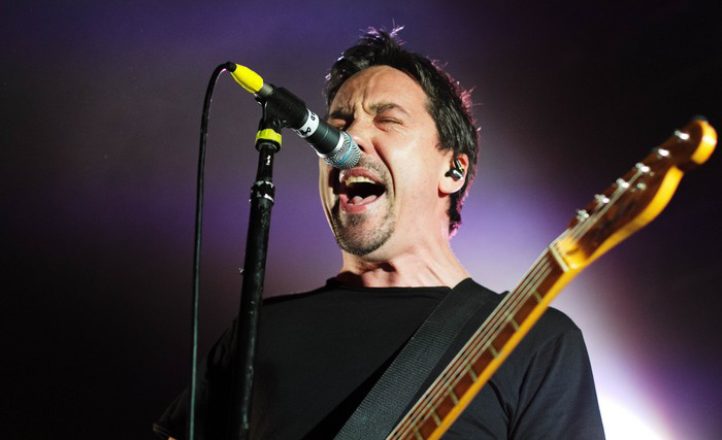 Shihad never disappoint on the live front. Their legacy of hard working, relentless touring and delivering no nonsense live shows is well known as is their bravery in documenting their rocky road in film. Their latest album FVEY sees them unexpectedly teamed up with producer Jaz Coleman and the results are a fiery, impassioned return to walloping form with the potential of earning an ARIA in the process. The band thrives on societal upheaval for inspirational song writing and seeing the album played in full promised to be a solid reminder of the enduring precision of their live performances.

An opening set by Kiwi two piece, Cairo Knife Fight no doubt pleased the arriving punters in attendance but given this reviewer missed that set, not much can be added. Following them, another nominee for album of the year took main support honours for the night in the form of upcoming Melbourne hopefuls High Tension, ready to rock in support of their debut album, Death Beat, produced by Shihad drummer Tom Larkin.

As the PA pumped out Sepultura’s ‘Roots’, High Tension appeared onstage, backed with red lighting and opened with guitarist Ashley Pegram playing a repetitive riff that hovered largely around one note and was accompanied by drums and bass before vocalist Karina Utomo offered a half spoken, half yelled delivery. It fitted in with the music’s hard hitting approach. Sometimes the diction of the lyrics were not overly clear as words blurred into each other due to a bit too much reverb combined with screams. Fortunately the pace and chord progressions developed some variety other than raging vocals.

Whilst as risk of creating an endless but monotonous punk vibe, subsequent songs offered a change of pace ranging from a slow, almost dirge like piece in ‘Without U.S.’ to the fast, powering ‘Mountain of Dead’ but again, the vocals blurred into each other. Slowing things down to a briefly glacial pace and then ramping them up again with a blast of feedback and fast riffing seemed to work. ‘High Risk High Rewards’ was a certain set highlight with a tight riff, strong chorus and a driving rhythm section from drummer Dan McKay and bassist Matt Weston. The whiplash of the song ‘Collingwood’ ensued followed by the abrasive ‘Are you Safe?’ to close off their decent thirty five minute set.

After tweaks to the stage set up were completed and an efficient sound check was done, the crowd awaited the mighty Shihad as a backdrop of the album’s skull artwork peered at the audience. Sabbath’s ‘Iron Man’ pumped out over the PA before stark white lighting and strobe bursts accompanied the mighty Shihad as they rocked up and launched into the first of the eleven album tracks to be trotted out. Refraining from too much banter, front man Jon Toogood let the songs speak for themselves as he and the band delivered the album tracks in workmanlike fashion.

The majority of the first half of the album is strong musically so that once fans are familiar with the songs live, Shihad’s set list might have most of those songs scattered throughout live shows in future. The low end rumble and direct attack of their song’s chorus power hit home live with ‘Think You’re So Free’, the title track, ‘The Living Dead’ and ‘Song for No One’ all being powerful highlights. Bassist Karl Kippenberger swayed in time with Tom Larkin’s hard hitting drum style. Meanwhile, suited up lead guitarist Phil Knight kept the sonic variety happening with swirling single note chimes and octave fills on his Fender Jazzmaster whilst Jon, in requisite black jeans and shirt, extracted mix cutting riffs from his well worn, down tuned re-issue model Fender Telecaster.

During the song, ‘The Great Divide’, Jon hopped up on fold back wedge whilst Karl stood on the drum riser, locking into the beat. Jon’s antics have toned down a lot since the days of running amok shirtless, climbing PA stacks and just generally bursting with energy. Concentrating on vocal delivery, the more mature Shihad went over well and the material benefited for it. Phil became more animated during ‘Loves Long Shadow’, coaxing feedback squeals from his amp while Jon poured his heart out in song. Closing off the entire new album being performed with ‘Cheap As’, audience chorus participation of an obvious expletive was encouraged to the crowd’s great delight.

Taking a quick dip into the back catalogue, Shihad capped things off with a selection of favourite tracks. Jon, now with his road hardened black custom Telecaster workhorse guitar of old and Phil with his trusty Gibson Les Paul, kicked right into the pile driving ‘Factory’ followed by the ringing chordal riff and stomping simplicity of the great song ‘You Again’. A couple of heavy, well known tracks from The General Electric had the crowd completely won over and singing along as the set flowed into the Pacifier era with ‘Comfort Me’. The show was thus closed with the always superb and reliable rock bounce of ‘Home Again’ to a sea of happy faces, satisfied by one of the best live bands alive.

Tonight’s show was a victory, sitting nicely beside their rare full album shows at the once great Annandale Hotel. To be able to play the full album in a live setting shows how well rehearsed Shihad are and also how hard they worked as a cohesive band unit in the studio, perfecting the songs. It also indicates their conviction towards their cutting new material to be able to put it alongside a bunch of classic tracks with utmost confidence.