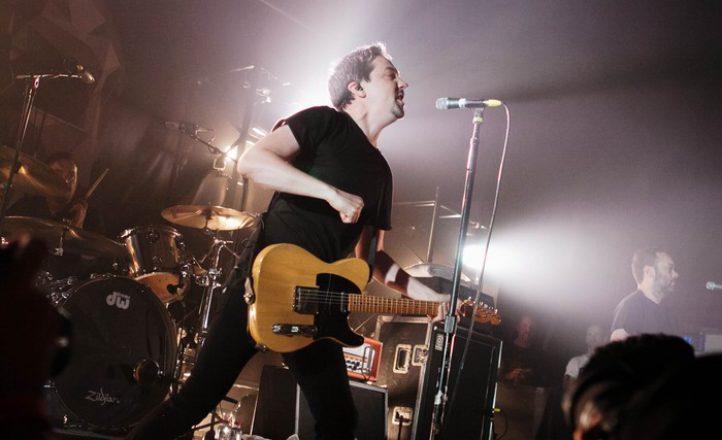 New Zealand’s finest, the mighty Shihad, were effectively adopted to Australia many years ago around the time of their self-titled album aka the fish album. Not long afterwards, The General Electric distilled the best of their Blue Light Disco EP as well as introduced a bunch of songs that bolster their set list to this day. Back then was when the band ruled festivals by unintentionally upstaging numerous others with not just incredible energy but tight, punchy rock songs. Having now found a new fire in the belly with their most recent album FVEY and then celebrating their back catalogue in solid touring fashion, they continue to be one of the best live acts on the planet. In that light, tonight’s support bands had their work cut out for them but still appeared to shine in their own way, offering up some decent warm up tunes and not too shabby performances.

First up, Kiama band The Vanns brought their indie vibe quite nicely to a slowly filling room. The three piece fronted by Jimmy Vann on guitar and vocals, backed by bassist Tom Switlek and drummer Joey, filling in for Lachlan Jones with a broken arm, whipped through their set with confidence. ‘So I’m Told’ from their new EP had a jangly, pop rock feel to it and ushered in a bit of blues noodling in ‘Who Knows’. The latter song melded a funk feel with expressive, wah pedal infused guitar work alongside some good drumming and was their set highlight even if it was very derivative of John Butler’s vocal stylings. Further into their set, some crowd rousing call and response attempts failed a tad but their attitude with grooves the had their drummer bouncing on his stool whilst smacking his kit solidly. Finishing their set with the shuffle feel based yet raw single, ‘I’m Not the One’ capped off a pretty decent opening set. The band has some definite potential and are well worth catching live.

Over the PA during the first changeover, it was an Aussie music lovefest as Ian Moss, Boom Crash Opera, Aussie Crawl and Screaming Jets tunes competed with the odd burst of sound check noises. The room now filling up to more Aussie Crawl and Chisel tracks saw a mix of old and young rock fans milling about.

Second support act for the night was another three piece band, Grenadiers from Adelaide who opened with their very QOTSA influenced track ‘Summer’, and didn’t they like to crack jokes between songs. Whether it was self-deprecating humour from their front man and guitarist Jessy Coulter or just announcing song titles, the band developed an almost instant rapport whilst belting out their indie punk rock. A raw sound with the drumming becoming more aggressive, guitar jams where minimal but had some urgency to their delivery. Bassist Phil offered a heavier rumble against the piercing guitar tones that enhanced changes of pace between dense jams to more sparse songs such as ‘Stay Inside’.

Throughout, their bursts of powerful punk rock came to the fore. Higher chord inversions for emphasis on chord progressions to long, held ringing guitar tones were backed by a driving rhythm section. Their second last song in their set, ‘Live Fast, Diabetes’ was humourously dedicated to the current NSW premier for ‘saving all them puppies’ still saying that ‘even a broken clock is right twice a day’. Closing their set with ‘Old Uncle Scratch’ had fast drumming and an almost ‘Ace of Spades’-styled bass figure in it, almost a gallop that The Living End would proudly do, although not as fast. As the audience applauded their set, Grenadiers proved themselves to be more than just another good support band.

As the changeover for the headline band was well underway, Shihad drummer Tom Larkin was lurking about making adjustments whilst Shihad lead guitarist Phil Knight inspected his guitars, playing very quick bursts of rock riffs whilst darting on and off stage with different guitars. Rolling Stones tracks were drowned out by the air being pushed by kick and snare drums that racked up the sound levels noticeably.

Lights dimmed and sure enough, on walked Shihad and the band kicked off the set with the bright Home Again. Lighting was impressive as light beams cut across the audience, spinning through subtle smoke machine whilst on stage, there were large lighting array blocks that were simple but effective. Delving into a few songs from their 1996 Shihad album was the impetus for show itself and also go it kicking off at pace. The catchy chorus of ‘Ghost From the Past’ was followed by the slower, heavier yet no less catchy rendition of ‘Yr Head Is A Rock’ to a ripping, pure rock energy of ‘La La Land’. Enthused at the Shihad material being around twenty years old yet still having so much life to it, front man and guitarist Jon Toogood then provided some brief information on the Blue Light Disco EP being produced by Magoo before trotting out the still thumping song of relevance, Interconnector.

Suitably followed by the bass and drum prevalence within the song ‘Wait and See’ which overlaps into The General Electric album, bassist Karl Kippenberger grinned and swayed happily whilst Phil Knight simply kept the riffs pumping along on his Les Paul guitar with his signature, subtle embellishments. Shihad’s visual aspect is still a draw card, as witnessed when Jon took his Telecaster guitar and rested it horizontally on his head post chorus with a cheeky giggle as strobes lights went off to then drop a pick slide, bringing the guitar back down to return to the chorus. Flashing the devil horns hand signals in approval to the crowd, it was time for The General Electric‘s title track. It remains a monster riff, greatly spiced up by simple effects from Phil using the pick-up selector on his guitar. The set got heavier soon enough with ‘My Mind’s Sedate’, a song which virtually took commercial radio hostage at the time of release. The crowd jumped in unison to see the song finish with a silhouette of Jon due to backlighting, atop the front fold back wedge with his guitar aloft in the best rock pose of the night.

The ever reliable breathing space song ‘Pacifier’ delved into the sing along and hand waves with the room briefly lit up and from there, the set deftly bypassed the name change era and oddly enough the subsequent Shihad albums from the previous decade to time travel up their most recent and brutal return to form album, FVEY. Guitars were changed to down tuned instruments for the next batch of songs which increased the heaviness substantially. ‘Think You’re So Free’, ‘FVEY’ and then ‘The Living Dead’ were simply punishing. Phil’s swirling guitar solos or use of droning, notes further embellished the heavy riffage. The walloping ‘Cheap As’ offered the crowd the expletive response option during the chorus before strobe lights kicked in with vengeance as the song throttled into the double time second part with hammering drumming that would make Slayer proud. A fitting end to a main set that covered some lyrically acerbic, riff intensive yet brilliantly melodic songs that makes Shihad unique.

Encore time gave the band the opportunity to play Factory, the first track from 1993’s Churn album at none other than the Factory Theatre. The thrash metal influenced, riff heavy, repetitive bludgeoning segued nicely into the simple power of ‘You Again’ from the superb Killjoy album to close the night’s performance. Shihad keep getting better with age, losing none of their bite but gaining more worldly experience reflected in their lyrics and musical arrangements. Tonight’s set offered a good selection even if some albums were missed but given they packed it into 80 minutes with their most recent album still proudly on display, it made sense in context. Shihad may be older and wiser, but their sound still packs some serious power as witnessed by those at tonight’s packed venue.