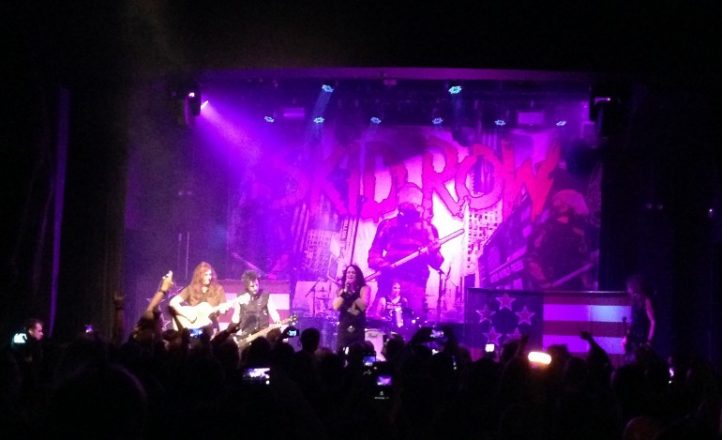 Skid Row was thrown into the limelight when their original singer and all round hellraiser Sebastian Bach was fairly young. How individual members handled the swift rise to prominence back in the day varies but their last huge glorious moment with the original line-up was with the 1993 Guns’ N’ Roses tour. A history of different career paths for Bach and the core unit of the band is already well documented but to bring things up to near present day, the last time Skid Row was here they were touring their United World Rebellion EP, supporting Ugly Kid Joe and had Johnny Solinger fronting the band.

Since then, ex Dragonforce vocalist ZP Theart has joined Skid Row and whilst some new material would be nice, the tour sat well with long established fans wanting a trip down memory lane with some more recent material to add some variety. Bach’s vocal range is certainly impressive so it was interesting to see how well Theart would manage those high and sustained notes plus if he could carry that same sort of raw attitude.

First up, Dept. of Gloom did their best to look edgy with Gothic rock make-up but still offering up a fairly straightforward rock sound. Still, their banter and crowd interaction skills were pretty decent and as a means to get the crowd pumped up, they did the job. The twin guitar approach let loose some pretty nifty guitar solos and some of the riffs did have that industrial music and metal influenced edge to it. The odd squeal of feedback plus some noisy garage guitar riffs worked reasonably well against more open vocal harmonies with verses building to choruses with some decent hooks.

Second support band on tonight was Sydney based five piece rock Bad Moon Born whose capable front man Frank Lakoudis has the Chris Cornell vibe down pat and in a good, respectful way. Playing material such as ‘Promised Land’ from the Chemical Lullabies EP added some snappy solos from guitarists Voya Miluinovic and Ned Koncar. ‘Witch Trials’ had a great groove to it with the rhythm section of drummer John Ezilmez and bassist Nick Allen cementing the foundation allowing Lakoudis to really push his vocal with strength.

Their single ‘Alive?’ offered more groove with some sonic spaces in the verses and some tasty guitar effects to build into the chorus, very much in the vibe of Alter Bridge. They soon whipped through a few mores songs with a respectable rock delivery and done with some skill. Bad Moon Born has certainly got the material to get bigger as well as the stage presence to go along with it.

As the crowd increased in the venue to see the tour hardened Skid Row, the jury was out as to how things would pan out. Punters had nothing to fear because right from the first song of opening track ‘Slave to the Grind’, Theart was nailing the notes whilst aggressive guitarist Scotti Hill and the more laid back but no less sonically fierce guitarist Dave “The Snake” Sabo were off and racing in the riffing and soloing stakes. Drummer Rob Hammersmith thumped his kit with rock and roll timekeeping precision whilst bassist and driving force of the band, Rachel Bolan locked in with the music adding some raw attitude backing vocals to subsequent songs ‘Sweet Little Sister’ and ‘Piece of Me’ from Skid Row’s debut self-titled album.

‘Livin’ on a Chain Gang’ proved to any doubters in the audience that Theart was indeed a suitable choice of vocalist for the band as he delivered the Slave to the Grind track with spot on attack. Of course, ‘Big Guns’ was typically cocksure and saw more traded guitar solos between Hill and Sabo. The hit song power ballad ’18 and Life’ had the audience won over completely with phones aloft like ciggie lighters and the lyrics being sung back to the band word for word. Some tasty guitar work was kicked off by Hill then followed up by Sabo, sticking largely to the song’s format but doing it brilliantly. ‘Makin’ a Mess’ had some more water bottle contents antics from Theart and it was the usual banter that included song titles but that’s the way it works for this sort of show.

Certainly, it was unexpected to hear ‘Medicine Jar’ from Subhuman Race played live but no one was complaining. An enthused Bolan addressed the crowd thanking them for support and celebrating the rock brotherhood to introduce and sing lead vocals on a rip snorting version of The Ramone’s ‘Psycho Therapy’ chock full of punk rock brashness and bravado. Changing pace again, another power ballad was aired with the dynamic ‘Quicksand Jesus’ briefly using acoustic guitars. It worked a treat with Theart again delivering the vocals with melodicism and power.

Set closer ‘Monkey Business’ though was quite probably the real highlight of the show with the Slave to the Grind track opened up for an escalating call and response trade off guitar duel of sorts between Hill and Sabo. They are underrated guitarists but anyone present this evening saw just how much technical ability they both possess as well as sheer snotty rock attitude with a good sense of humour and a quick nod to Dimebag’s ‘Cowboys From Hell’ riffing embedded within the soloing.

Encore time hit and it was a three song effort starting off with the vocal range pushing power ballad hit of ‘I Remember You’. The band show no trace of not wanting to play the song which they can quite likely play in their sleep and offered it up with convincing commitment to the song. The hard rock power of ‘We Are the Damned’ from Rise of the Damnation Army – United World Rebellion: Chapter Two was a suitably well-constructed precursor to the final song of the night.

Of course, it was ‘Youth Gone Wild’ to close off the night and in true, loud rock’n’roll form, Skid Row hammered it out in well-rehearsed unison with the solos perfectly intact with bursting energy and Theart’s audience interaction bring the song to a bombastic conclusion. Skid Row did a cracking job at putting on a great eighty minutes rock show that pleased old and new fans alike.