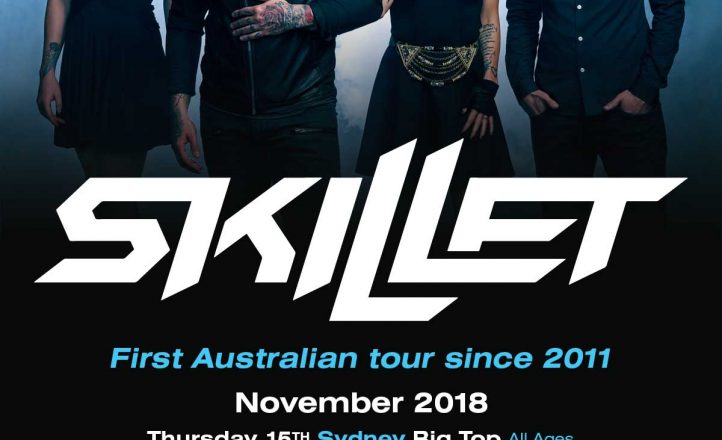 Skillet have such a massive following worldwide that it wasn’t a huge surprise to see a crowd of people lined up at Luna Park eagerly awaiting to get into the venue. Supports for this evening were an unknown quantity for this reviewer so as the line snaked through to the entrance of the venue, a good chunk of the crowd were still outside as the first band, Redhook, set off their set.

The four piece had the angst alternative feel down pat with a mixture of rap and metal. If drum and bass riffs and huge breakdowns with smashing cymbals were your thing then this would be the good start to the show. On the other hand, if the prospect of hearing a cover version of a Limp Bizkit song doesn’t inspire, then being late into the venue isn’t always a bad thing. Having said that, their vocal driven songs led into some reasonable choruses with swirling guitar sounds and a touch of No Doubt stylings made for a reasonably solid opening effort in front of a looming black and white Skillet logo backdrop.

Second support act for the night improved matters. Red Gazelle, who are also from Sydney, brought a four piece with a commanding vocalist offering a strong leading presence and a shock of more red hair. Some solid rock guitar soloing was done confidently and not overly indulgent plus a judicious use of effects provided some spice, opening with ‘Carousel’. Third song, ‘Damascus’ provided a solid groove and bridge breakdown showing their skills in song dynamics. Eerie high guitar tones worked well against tight gated rhythm guitar parts with plenty of thumping drum hits and powerful fingerstyle bass lines. The last song in the set included falsetto vocals and time changes similar to bands such as Alice In Chains. They clearly are a band to watch and the crowd reacted favourably.

As the PA pumped out ‘Sabotage’ and ‘Shoot to Thrill’ as this underage gig, it was immediately apparent that a good chunk of the crowd understood rock history with many young punters enjoying the sounds of AC/DC. It was even cooler to notice that many in the audience were familiar with Kings X’ brilliant track ‘Dogman’ as the volume level increased.

Skillet were not doing a huge pyro and video screens production tonight but that didn’t matter as the fans were keenly milling around the front of stage looking for a good vantage point. Fans were well rewarded once the band hit the stage with the full force of sound that was expected.

The low tuned thump of ‘Feel Invincible’ opened the show with enthused punters singing along to every word that front man and vocalist John Cooper sang. Wife Korey Cooper was on rhythm guitar and the sound from her down tuned PRS guitar was sensational, backed by some synth bass and keyboard washes in following songs that added a lot of depth to the music.

The real surprise was the walloping drumming power of young drummer Jen Ledger who also took on co-singing duties. Her attack and precision on the drums was something to behold. Cymbal work, snare hammering, whip fast fills and good technique was all visible. Lead guitarist, Seth Morrison, was also a clearly capable PRS guitar player with some fiery leads but the music of Skillet is driven by the rhythm section and the catchy melody lines. During ‘Sick of It’, the crowd all raised their hands to the air in unison as John Cooper’s infectious energy took them away.

On occasion he would take off the bass and prowl the stage with a microphone and in other songs, such as the big hit ‘Hero’, a duet with Ledger, briefly stepping to the front of stage from her drum position had the fans overwhelmed with enthusiasm. Prior to that, ‘Awake and Alive’ and ‘Not Gonna Die’ had some guitar soling highlights with Morrison stretching out and playing with passion. Plenty of guitar changes happened between songs which just indicated how well rehearsed and on the money Skillet were tonight. Even the banter from John Cooper had a feel of spontaneity by adding in anecdotes from people he had met before the show which the audience loved.

Adding a touring cellist, Tate Olsen, for some songs also allowed for freeing up Cooper or simply adding an extra musical flavour to the tracks during the middle section of the performance. The crowd interaction was bolstered by harmonised guitar parts which, whilst brief, showed that both Korey Cooper and Morrison were in sync on the guitar lines, playing similar parts but in octaves. The lighting production added to the rollercoaster feel of songs and enhanced introductions with aspects such as strobes, pink array beams, green pulse and bright white spinning spotlights as the songs progressed and gained momentum.

Songs such as ‘Comatose’ and a red lit stage for ‘Monster’ gave a great boost in the set too with the audience enjoying the intensity and not missing a beat. Admittedly there wasn’t material aired from their early back catalogue but Skillet know their audience and the set list was constructed as a good overview between the last four albums, all of which have some great songs within.

All of the band can sing and play their instruments in great harmony so the use of production tapes was probably to enable recorded material familiarity but it was used sparingly. They’re nothing like Stryper musically speaking but regardless of that, Skillet killed it live. Their stagecraft is impeccable and this is one band worth making the effort to see live.