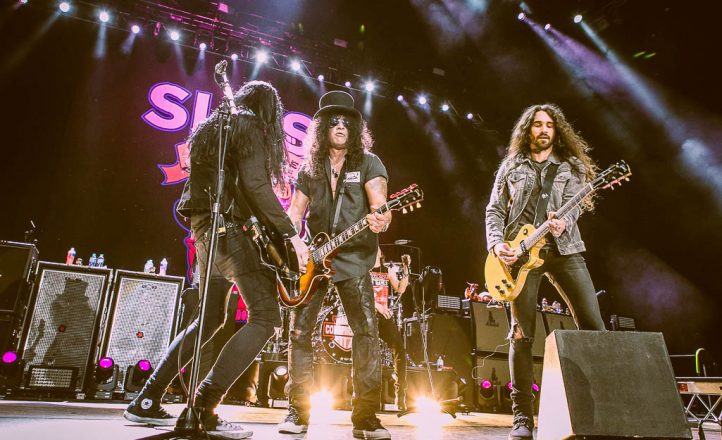 Summer in Australia is traditionally the season for international touring artists to take a punt with the humid and scorching weather. Slash has toured Australia many times before including festival jaunts in the heat so returning to Australia with his band at this time of year was not surprising given he is a regular visitor.

Support tonight was from Kiwi band Devilskin, fronted by the formidable vocalist Jennie Skulander in a striking red dress. Guitarist Tony Vincent and bassist Paul Martin both provided backing vocals to strengthen her powerful vocal skills but they also sported low string guitars, banging their shaved heads in their best metal stances as they cranked out
low rumbling, down tuned riffs. Drummer Nic Martin smashed at his kit with utmost power on the set that sat on a smaller riser in front of the curtained off headliner’s impending stage set. Delving into material from the albums We Rise and Be Like the River, Devilskin were professional and well honed at their craft as they launched into each song with well rehearsed presence. Skulander’s expressive vocals were enhanced by her stage presences with her waving a portable smoke machine and running up onto the drum riser. Guitar lines included some subtle tapping amongst the riffage and slinky solos.

New song ‘All Fall Down’ had a distinct groove metal approach whereas ‘Start a Revolution’ from their first album was an initially slower
atmospheric burner with a soaring chorus. A bass introduction to ‘Never See the Light’ followed by some slide guitar work soon had the audience clapping along before the harmonics laden riffs fed into two wah drenched guitar solos and a heavy outro as Skulander did a quick cartwheel. Last song ‘Violation’ got progressively faster with Skulander’s vocals shifting well between growls and clean before fast drumming and powering guitars concluded their set with a very metal ending.

As the massive backdrop for Slash and company’s performance was winched up, sporting album artwork, the stage set was soon revealed whilst ‘Pinball Wizard’, Cochise’ and ‘Spoonman’ echoed out loudly over the PA. On stage left, Slash had three full signature cabinet
stacks pushing into the huge centre stage drum kit on a riser.

Myles Kennedy and the Conspirators are seasoned arena artists with Kennedy an engaging frontman from outset. A sudden burst of light and sound saw the headline act show begin. Aside from Slash and Kennedy, there was Brent Fitz on drums, the tall and Nikki Sixx-style bass sporting Todd Kerns and Frank Sidoris on rhythm guitar. Opening with ‘The Call of the Wild’ from the new album, Slash, in leather pants, sunglasses and signature top hat, let rip on a tobacco sunburst Gibson Les Paul guitar with a thick, warm guitar tone whilst Kennedy casually moved about stage. ‘Standing in the Sun’ had Slash warmed up and leaning into his guitar as he played with the neck raised. The end solo saw more forceful guitar playing as he began to unleash. ‘Back from Cali’ found Kennedy was in fine form, running around the stage whilst Sidoris smashed out the chords on a tour beaten Telecaster.

The first guitar solo highlights came during another new album track, ‘My Antidote’. Slash’s fast technique and arm strength in delivering blistering lead guitar patterns shone. ‘Bent to Fly’ showed off his rock ballad skills before another ripping solo at stage left full of wide vibrato whereas ‘Serve You Right’ saw him centre stage to give his wah pedal a workout, following up with more lead work during ‘Read Between the Lines’ on a tasty dark red, cherry Les Paul guitar.

A brief two song dedication to Lemmy, ‘We’re All Gonna Die’ and ‘Doctor Alibi’, allowed Kennedy to take a break as Kerns handled the vocals. During the latter song, Slash was back to back with Kerns during the solo with Fitz beating the life out of his drum like a man possessed.

‘The One You Loved is Gone’ had Slash playing on a twin necked SG Gibson SG offering up clean guitar parts followed by a great, fluid guitar solo as the stage was immersed in blue and then purple lighting. The rock grooving ‘Wicked Stone’ contained the peak of virtuoso athleticism from Slash as a very long, extended  solo at centre stage with his guitar resting on his hip and held vertically. A barrage of pull-offs and speed runs the covered the full fretboard range plus relentless repeated patterns edging towards screaming high notes had the audience transfixed. Rock guitar is alive and well for this crowd. His tremolo and alternate picking was
ferocious and precise. It was a highlight of the set with the band taking a back seat to the amplifier backline as Slash just kept soloing away. Slash is remarkably fit given his past antics and pacemaker operation reminding him of his mortality, running around and adding some Angus Young-like hopping during ‘Mind Your Manners’. Gunners classic ‘Nightrain’ had the
audience amazed, Slash bowing his guitar neck on sustaining bass notes before the extended outro solo was a rapid fire example of his
improvisational brilliance.

The encore saw the band return and let rip with a quick ‘Shadow Life’ as the rhythm section stage movements were perfectly done and drum sticks were twirled between snare cracks and cymbal hits. The concert closing track was naturally ‘Anastasia’ and was introduced with Slash atop the centre stage front platform as the neo-classical riff with a hard rock edge fed into the soaring track. A long, extended end solo ensured the encore had an ample serving of guitar playing from Slash and the audience cheered. Show completed, the band took their bows.

Slash and band put in a top notch performance tonight and any self
deserving hard rock fan should make an effort to catch this tour.