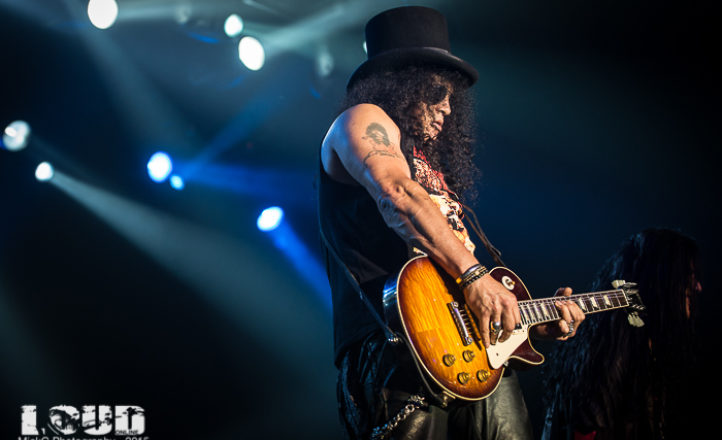 The early start time for tonight’s double header of glam rock parody band Steel Panther and unique guitar legend Slash with his cohorts required some quick manoeuvring through peak hour joys. Arriving just minutes after Steel Panther hit the stage, it wasn’t too hard to navigate down to a good viewing position. Having flown through two new tracks from their most recent album All You Can Eat, the silliness of ‘Asian Hooker’ segued into the groove rock of ‘If I Was the King’. Their live stage show production this time was stripped back from the previous outlandish tour here in late 2013 whilst retaining their tongue in cheek lunacy and endless comedy routine at the expense of the overblown indulgences of eighties hair bands.

As lead guitarist Satchel paraded about unleashing an unaccompanied guitar solo complete with absurd overhand finger tapping, the odd intentional mistake for comedy value wasn’t wasted before returning to spot-on guitar playing during ‘Turn Out the Lights’. Anyone that grew up into rock guitar in the eighties should be able to pick each famous artist’s style pilfered yet strangely celebrated within Satchel’s guitar playing. References to George Lynch, Warren DeMartini, Nuno Bettencourt, Yngwie Malmsteen, Joe Satriani and Edward Van Halen are plentiful for anyone listening closely. 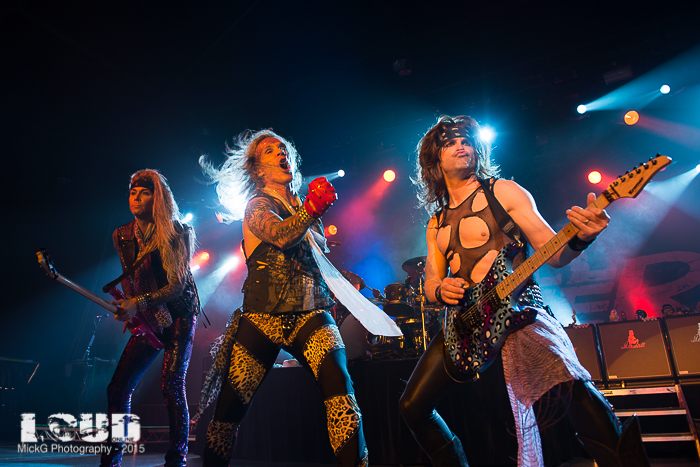 It is probable that most in attendance are partially oblivious to those exacting source material details and instead latch onto the David Lee Roth-inspired mannerisms of front man Michael Starr, intent on having a good time whilst rejoicing in his stage character driven banter about loose groupies, illicit drugs and the vanities of a ridiculous era in rock that imploded in its own self-importance. However, the musicianship back then was exceptional in several cases as most bands centred on the lead guitarist, some of whom still have careers today by sheer virtue of their talent. Steel Panther know this and capitalise on it by appealing to old school fans and to people only just discovering bands such as Ratt, Dokken, Van Halen, Skid Row, Warrant, Extreme and so on. Bassist Lexxi Foxx encapsulates the requisite poser routine with mock cocaine sniffing, hair teasing and preformed a hair solo where both Michael and Satchel provide the wind tunnels via air blowers.

The profanity littered ‘anecdotes’ throughout the songs’ lyrics entertain and push acceptable taste as does the invitation for girls to jump onstage and expose themselves to the hyped up audience. During the songs ’17 Girls in a Row’ and ‘Gloryhole’, that was par for the course. On this occasion there was only one participant making their usual escapades far tamer than prior visits. Parents with their kids in attendance to see Slash undoubtedly breathed a sigh of relief. Be it an acoustic guitar led mocking of power ballads during ‘Community Property’, the use of props such as a DLR white hat, or gyrating the air, they milk the material tirelessly. Nearing the end of the set, the song  ‘Party All Day (Fuck All Night)’ was so comically close to a Bon Jovi hit and enhanced by a key change that some in the audience where almost caught out signing along to ‘Livin’ On a Prayer’ accidentally.

Finishing off the set with their classic ‘Death to All but Metal’, they ended it with drummer Stix Zadinia catching Michael’s hat on the third attempt after the front man tossed it up in the air near the drum riser. More gags continued with Satchel thanking the sound man instead of Michael during band member introductions at the end of their set. Some might argue that Steel Panther’s slapstick of feigning band personnel tensions, calculated stage mishaps and intentionally misjudged choreography may have reached saturation point, for want of a better phrase, but they know their audience and deliver the goods in bucket loads. In that context, their titillating show antics is merely icing over some professionally performed and tightly rehearsed music, proving they have worked hard at honing their act to a fine art. How long the appeal of it lasts remains to be seen but they deserve to be recognised for being exceptionally good at what they do, irrespective of taste.

As the crowd mingled about during the changeover, lighting changes made an array of multiple amplifier cabinets become more visible, as did the latest stage backdrop promoting the headline band’s latest album World on Fire. It is quite probable that Slash could dodge some of Steel Panther’s comedy jibes since when Guns N’ Roses hit the world, they effectively reinvented the Aerosmith rock swagger in an era of overblown glamour excess. Admittedly, they indulged, almost fatally and their front man had some questionable attire but the legendary status of their still selling Appetite for Destruction album is possibly a less obvious target of parody. Soon enough, the lights dimmed for the backing band known as The Conspirators to wander on stage to be joined by front man Myles Kennedy briefly wearing a tan jacket over his singlet and of course, lead guitar god Slash in sunglasses, signature top hat and sporting a sleeveless Texas Chainsaw Massacre t-shirt.

Hitting the set hard with first song ‘You’re a Lie’ from Apocalyptic Love, Slash’s guitar tone was clear and powering through the PA thanks to the timeless combination of Gibson Les Paul guitars and Marshall amplifiers. Sustained chords rang out beautifully when both Slash and rhythm guitarist Frank Sidoris played riffs in unison but it was the screaming tone and identifiable lead playing that Slash peeled off with ease in the second song ‘Nightrain’ from the Guns N’ Roses catalogue, that had the crowd applauding wildly.

Myles Kennedy is a great choice of front man for Slash as Myles knows how to work the crowd, with his reputation further cemented by his skills seen in Alter Bridge’s live shows. He also knows when to hang back and allow the spotlight to go to Slash when needed. The use of raised platforms at the front of centre stage and near Slash’s rig allowed him to be in better view during solos. Sometimes leaning into the guitar or holding it horizontally, his proficiency on the instrument was immediately apparent. Songs such as ‘Ghost’, the obligatory ‘Back from Cali’ and both newer tracks ‘Automatic Overdrive’ and ‘Dirty Girl’ from the latest album had the crowd singing along as the rhythm section of drummer Brent Fitz and bass playing backing vocalist Todd Kerns kept things running along with a constant yet dynamic pace. 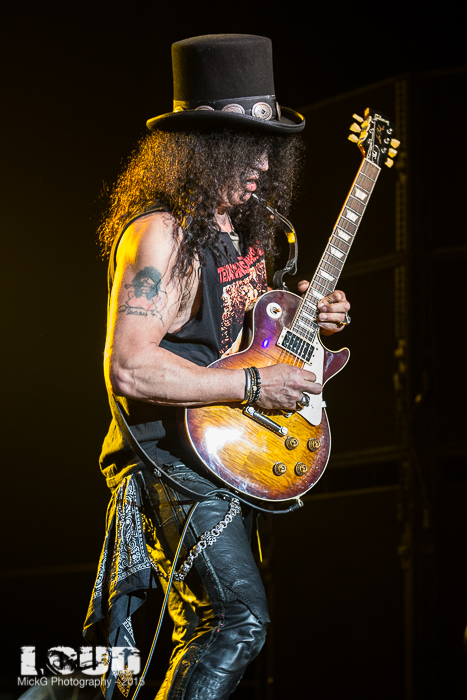 It was cool to be treated to a couple of classics Guns N’ Roses songs from the Use Your Illusion albums in the songs ‘Double Talkin’ Jive’ and ‘You Could Be Mine’, both of which allowed raw rhythm guitar to empower the lead explorations of Slash with amplifier feedback being coaxed to good effect in the latter song. Bassist Todd Kerns then took on vocal duties covering the Lemmy Kilmister and Axl Rose’s contributions to ‘Doctor Alibi’ and ‘You’re Crazy’ respectively with decidedly good stage presence whilst Slash interspersed speedily aggressive guitar solos.

Newer material and a slower change of pace was heard with the melodic song ‘The Dissident’ which segued into the ballad ‘Starlight’ with the two songs enabling Myles Kennedy to lead the crowd in sing-alongs, proving his aptitude for leading an audience and delivering great vocals. Classic Guns N’ Roses song ‘Rocket Queen’ then powered along nicely to evolve into a fifteen minute improvised solo spot from Slash as the rhythm section locked into a simple accompaniment. It started out with understated lead guitar runs that had a rolled back tone of Jeff Beck and some sneaky country intervals before speeding up into the more brittle and increasingly fast blues based, wah pedal drenched rock soloing Slash is known for throughout his repertoire. Aside from the musicianship, his endurance was also on display as everything from bass note growl effects to fiery passing notes on the upper register of the guitar were played. Returning to the latest album, both the gentle climactic build of ‘Bent to Fly’ and the rock power of title track ‘World on Fire’ had the crowd rocking out.

Finally, it was onto the last stretch of the night’s expansive set as the expected hit ‘Sweet Child O’ Mine’ was performed succinctly. The main set was then closed with a rendition of Velvet Revolver’s ‘Slither’, giving some in the crowd a trip down memory lane to when the now dormant band once played one of the best shows ever seen at the Hordern Pavilion, representing the last time Slash played said venue. The encore, as per usual, had to be the ever reliable closing song ‘Paradise City’ which would be virtually impossible for any band to follow. Confetti just added icing to the cake.

Some fans may bemoan that no material from Slash’s Snakepit was aired tonight but other than that omission, the set list covered the vast majority of Slash’s illustrious back catalogue. Classic material played tonight was a product of its time yet by being of such quality substance, manages to avoid being dated by the era that Steel Panther so mercilessly skewers. As a result, be it the new album material, old Guns N’ Roses classics or comparatively recent solo material in the set, the quality song writing and delivery is virtually flawless throughout. For just over two hours, an eventually very sweaty Slash featuring Myles Kennedy & The Conspirators delivered a blistering rock show that was exactly as expected and they did it perfectly. What more could anyone want?

STEEL PANTHER
Pussywhipped
Party Like Tomorrow Is the End of the World
Asian Hooker
If I Was the King
Turn Out the Lights
Girl from Oklahoma
17 Girls in a Row
Gloryhole
Ten Strikes, You’re Out
Community Property
Party All Day (Fuck All Night)
Death to All but Metal