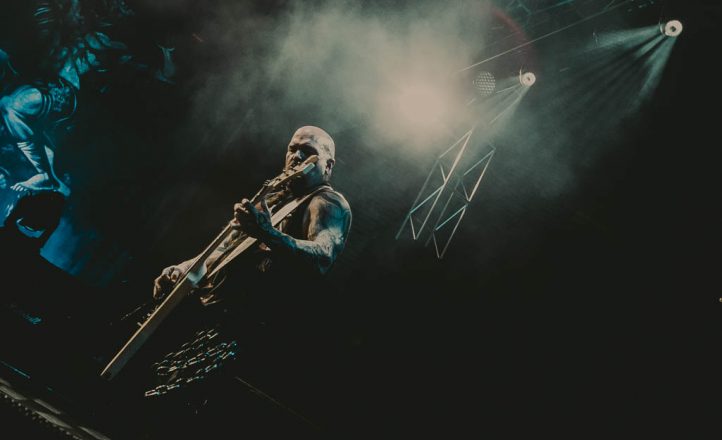 The Riverstage on the banks of the Brisbane River has to be one of the best outdoor venues in Australia, nestled at the bottom of a hill that allows music to travel throughout the grounds unhindered.

The assembled masses were hoping for a big night with every band on show still either at or near the peak of their powers.

Thanks to some draconian noise laws in Brisbane, Behemoth hit the stage earlier than expected and clinically on time at 6pm. This means that like so many other punters fighting the Brisbane traffic to get into the venue, LOUD misses the opening 10 minutes of the set.  Not all is lost though, as we still get to witness the band play up to the crowd in all their black metal glory. Several costume changes abound for frontman Nergal, with the high point for those not as familiar with them being the regal-looking get-up from latest clip ‘Bartzebel’. The set time was as long as I assume it will be for Download over this coming weekend, so we are treated to a setlist that covered a bit of everything.

Anthrax haven’t graced our shores in sometime – not that you would know from the reaction they receive.  Bounding out on stage to play the opening riffs of Pantera’s ‘Cowboys From Hell’ before launching into their own set proper, they ripped through all the hits of the Joey Belladonna-era with a set that also feels like a warm up for Download.  Playing all the older material allows the crowd that are assembled to farewell Slayer to sing every word back to the band during their set, and it looks like A LOT have come out of mosh retirement for one night only.

Slayer have always put on a great show, and as stage lights flicker and the intro tape rolls, a hush comes over all as we await the curtain to drop and the insanity to begin. Launching straight into ‘Repentless’, Slayer show they mean business and are retiring on their own terms. The set is like a time capsule as it weaves from newest album to their older classic material, with the heavens on the bands side as heavy rain begins to fall when ‘Raining Blood’ starts, as if Jeff Hanneman wanted to make sure he wasn’t forgotten during this celebration of great thrash.

As much energy as their music has, Slayer look to only be going through the motions this evening, all keeping to their corner of the stage, with little banter going on between each other or the crowd that are here to bid them a fond farewell.  As ‘Angel of Death’ rings to a close, they do not even stand together to take a bow as they quietly leave the stage. Kerry King comes back to throw some picks into the pit as Tom Araya just stands and takes the moment in, personally thanking those that can hear him without a microphone. Araya appears to be the only one genuinely grateful for this experience from the stage, approaching the microphone one last time to thank everyone here for supporting the band, and wishing them well in retirement.

So long, Slayer, and thanks for the music and the memories.

Anthrax:
Cowboys From Hell/Caught in a Mosh
Got the Time
I Am the Law
Be All, End All
Evil Twin
Antisocial
Indians