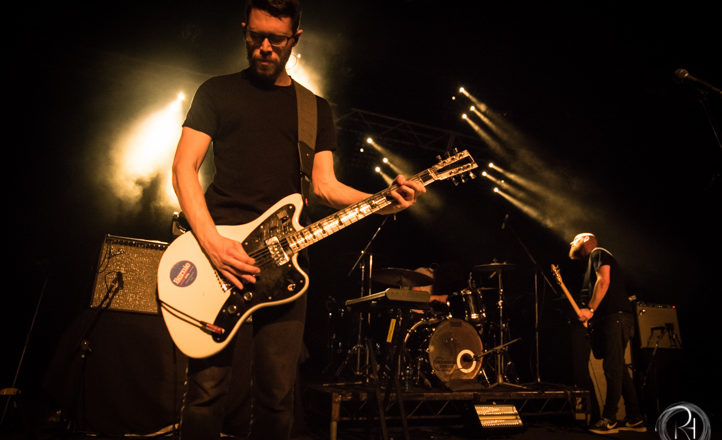 Instrumental rock bands have rarely caught the attention of mainstream media or have received any air time on commercial radio stations. In Sydney however there is an emerging scene of bands who love to play long pieces of music that take the listener on a journey. This music is heavily inspired by progressive rock/metal and post-punk.

sleepmakeswaves is at the forefront of this movement and are gaining more fans every time they announce a headline show or when they open up Opeth, Cog, Karnivool, Dead Letter Circus or Bosnian Rainbows. They also have been nominated for an ARIA and have toured throughout the world. I was at their headline show in Sydney at the Metro Theatre and joining them was Tangled Thoughts of Leaving, The Contortionist, and Dumbsaint.

When you get to a concert you normally don’t see all the punters outside of the venue but when I arrived to the Metro Theatre I saw every one outside. I was later informed that a fire alarm had gone off in the venue. It only turned out to be a false alarm and after that ordeal everyone came back to see sleepmakeswaves.

When they came on stage a loud applause was heard and the band was ready to get the audience straight into the show, telling the audience they were happy to see everyone back inside and that they would give a 110% performance. That was exactly what they did from the opening song ‘To You They are Birds, To Me They are Voices in the Forest’ and then with other standout tracks from their catalogue. Their stage presence was infectious and made the crowd get right into their long instrumental passages. There was no need for moshing – they were simply standing or sitting, admiring the music.

sleepmakeswaves create some amazing melodies and they mix in electronic soundscapes into the heavy rock riffs which makes the music sound contemporary and fresh. Their repertoire comprised of new and old songs and many of their fans could instantly recognize nearly every song they played. I only caught the end of Tangled Thoughts of Leaving, and they certainly were menacing and put a lot of effort into their performance.

sleepmakeswaves is a band that is waving the flag for exciting new music in Australia that is authentic and sophisticated for an audience that listens to a wide range of bands.