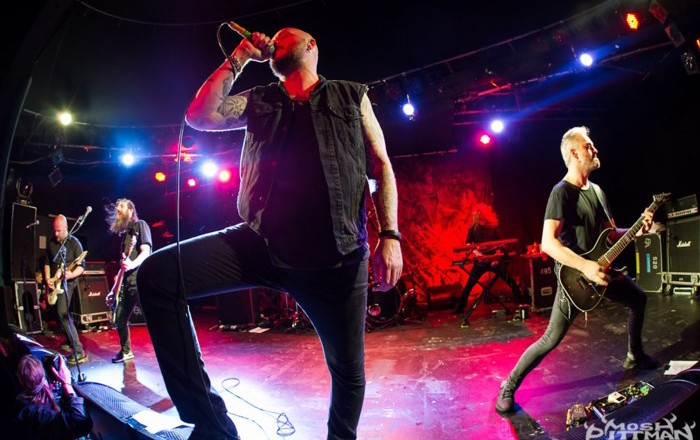 Walking through the Moore Park entertainment quarter on a Monday evening is positively eerie. There’s virtually no one around and everything’s closed except the place that used to be the Fox and Lion but has apparently since been infected with Irish Pub disease. Around the corner and on to the venue now known as Max Watt’s although the words ‘The HiFi’ remain on the wall outside, and the area still has the haunted ambience of a late-night car park.

Inside it’s almost as barren as it was on the street. Could it be the venue? Perhaps Soilwork’s just been here too many times for people to care enough to come out on a Monday night in Sydney, the city where nightlife goes to die? It seems I’ve missed the first opener, local shredder James Norbert Ivanyi, which is a bit of a shame but I really should get my arse into gear earlier. The band I wished I’d missed was Aversions Crown, who adhere to a strict regimen of single-minded, one dimensional bollocks. There’s no riffs, just ceaseless staccato battering from guitars that might as well only have two strings for all the use eight seems to be (Eight strings! For this type of garbage!), endless bass drops and relentlessly triggered drums playing the same blast beat for forty minutes. Dynamics equate to the same one-note guitar-synth melody. There’s nothing different about any of their songs but the titles, except for ‘Erebus’, which has a thrashy part for ten seconds before they spoil it. The vocalist tries to invoke a pit, but it’s hopeless. No one cares. It’s deathcore, and it’s terrible. No wonder the place is almost empty.

Except for that one time in the late 90s when I was broke at the Annandale with no one to sponge from, this is the first time I’ve done a gig stone cold sober. After the pointless brain-drilling I received from Aversions Crown, I was beginning to rethink the whole ‘dry month’ thing. I’m always interested in the shirts punters wear to gigs, so, unfettered by alcohol, I took to looking around the room at the crowd that was now beginning to file into the building. Unsurprisingly, they mostly amounted to adoration of Swedish death metal bands. The guy in the Nirvana shirt may have been trolling. I don’t know what the dude wearing one from the recent Amity Affliction tour was thinking, but then again, I used to wear a Green Day shirt to gigs for some reason. On stage, a roadie with the worst/coolest mullet I’ve ever seen was sound-checking. A chant went up, and there was suddenly at least twice as many people here as there was for the support band. It still wasn’t a record-breaking crowd, or even the best numbers this band has pulled, but it was, as Speed Strid would later observe, ‘not too shabby for a Monday night.’

There was no need for cajoling: as soon as Soilwork ripped into ‘The Ride Majestic’, a pit opened and didn’t close again for the next hour and a half. The Swedes’ easy-going stage performance belies the ferocity of the music they deliver. David Andersson looks like he’s being electrocuted every time he steps up to unleash a solo. His guitar team partner Sylvain Coudret appears to be channelling Mick Ronson’s orgasm face whenever he chops out a lead break. Bearing a striking resemblance to the man he replaced, new bassist Markus Wibom careers around the stage like an apoplectic scarecrow. Speed Strid is in blazing form, his voice a snarl, then a shriek, then melodic croon, his towering form holding court at the front of the stage while his wingmen dart and weave around him. This is a band having a whale of a time, playing off each other and using their energy to fire up the crowd without even trying, Dirk Verbeuren effortlessly nailing the whole thing down with a barnstorming display behind the drums. Every single track drags the crowd along, whether it’s ‘Alight in the Aftermath’ from the latest set, Stabbing the Drama‘s title track, the tip of the hat to Figure Number Five or something from the early days. Indeed, choice older cuts like ‘Bastard Chain’ and ‘The Chainheart Machine’ seem to garner the most furious response and Soilwork themselves transform into a vicious, flesh-rending beast when they play them. The sound suffered a bit, as it always does in this room, but Soilwork were so good, so on point at every moment, that it didn’t matter. Right next to me, some drunk guys were swaying and screaming along, including old mate who had his beer in the air so often I don’t know how he drank it, but there was no need for alcoholic libation to enjoy what was blasting from the stage tonight. Soilwork were fantastic.

The Ride Majestic
Nerve
Bastard Chain
The Crestfallen
Death in General
Alight in the Aftermath
Tongue
Follow the Hollow
Petrichor by Sulfur
This Momentary Bliss
The Chainheart Machine
Stabbing the Drama
—
Let This River Flow
Late for the Kill, Early for the Slaughter
Rejection Role
Whirl of Pain
Spectrum of Eternity