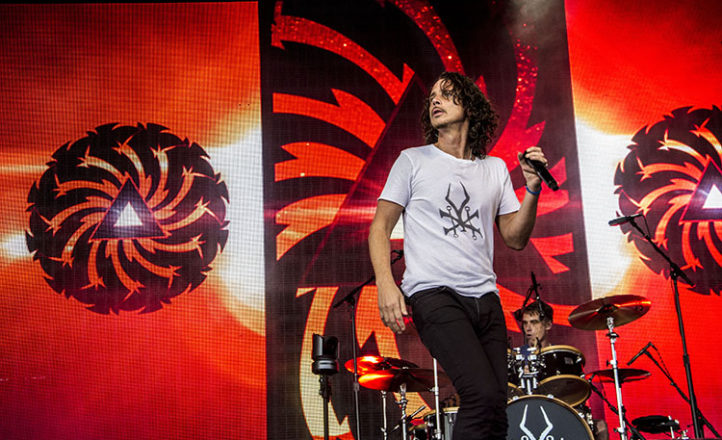 Being independently minded and still managing to have massive success that rides into the mainstream is generally rare due to the machine behind those happenings. However, in the early nineties, the alternative music undercurrent typified by the bleakness of the Seattle based music scene in America was effectively launched into the public eye largely due to the unexpected but understandable success of the grunge bands. Naive optimism and rampant cynicism soon clashed with career opportunism within unrestrained global success so that for many bands of that ilk, trying to negotiate having a career versus being true to their artistic views left some hollowed out.

Jumping through to present day and bypassing assumed knowledge on where various protagonists ended up or endured, this evening saw Soundgarden and the Foo Fighters playing to somewhat different yet strangely linked audiences on either side of the Sydney Harbour Bridge for large, professionally presented shows. Over at the Big Top, at the spectacular harbour side location that Luna Park inhabits, the ever intriguing Soundgarden pulled a myriad of different music aficionados out of the woodwork to see the relatively recently reunited classic line up deliver a set list that included hits, rarities and some brief yet insightful anecdotes on an era that shaped a generation.

Waiting for things to kick off, the crew methodically checked everything from spotlights to fluorescent gaffer tape needed to ensure there were no mishaps. Many years ago, at the height of the success of the album Superunknown, alternative radio flogged Soundgarden’s songs on rotation playlists to the point of overkill. So, without delving into a history lesson, the band’s break up and eventual reunion makes sense. Looking around, it is probable there were a good chunk of Selina’s night club attendees and Big Day Out punters from back in the day when Soundgarden were riding the wave of their huge success in Australia, so to speak. Last here in 2012, many eager music fans were hopeful of an animated performance and quite simply, they got that with a band focussed on delivering an interesting set list that entertained massively. However, hitting the stage thirty minutes late from the stated stage time resulted in a huge beer queue and the usual game of patience whilst staring at the empty stage in anticipation.

As the stage dimmed to then briefly bring up stark white light, on walked the members of Soundgarden. Drummer and backing vocalist Matt Cameron, free of touring commitments with Pearl Jam, strolled on first followed by the now greyish bearded and hat adorned, down tuned guitar master Kim Thayil and bassist Ben Shepherd with a very cool Fender P-bass. Front man Chris Cornell appeared and the band wasted no time in kicking into ‘Incessant Mace’, the first of a few tracks from the 1988 Ultramega OK LP to be aired tonight. Delving back a bit further, ‘Hunted Down’ from the Screaming Life EP of 1987 gave fans of obscure material a nod before two tracks from 1991 breakthrough album Badmotorfinger with ‘Drawing Flies’ and the classic ‘Jesus Christ Pose’ were served up, bookending ‘Ugly Truth’ from the Louder Than Love album, whereby Chris Cornell added a tasty Gibson Les Paul guitar to the mix.

The hit ‘Spoonman’ from Superunknown had the crowd hugely enthused in the now packed venue and was followed by the rare track ‘Kyle Petty, Son of Richard’, most recently heard on the triple CD release Echo of Miles: Scattered Tracks Across the Path but which initially appeared as a B-side on the  ‘Fell On Black Days’ single. The point being, Soundgarden had done their homework on presenting a wide and varied set list tonight instead of just trotting out the hits and telling the crowd how much they loved them. Guitarist Kim Thayil exhibited a calm demeanour whilst casually pegging out cool riffs with ease, dropping in a bit of sneaky slide guitar, observing crowd activity or simply being joined by a confident Mr. Cornell.

Naturally, some songs from the King Animal album of 2012 were played and overall, the reception to reasonably newer material was both accepted and enjoyed. Of those couple of songs, ‘Been Away Too Long’ received the best reaction. It also had Cornell sporting a snazzy Duesenberg Starplayer TV guitar that complemented Thayil’s black Gibson Firebird guitar which he also used to great effect during ‘My Wave’. Speaking of Kim’s equipment, the pedal generated Leslie sounds for ‘Black Hole Sun’ and the chorus effects used on ‘Beyond the Wheel’ gave both depth and proof of expertise in creating a unique mood to already solidly arranged songs.
Throughout the evening, a video screen backdrop enhanced the experience with animations, album artwork montages and some other impressive visuals. One such example was the murky, swirling blue background displayed during the song ‘Blind Dogs’ which is apparently touring photographer Ross Halfin’s favourite track, as pointed out from the stage by Cornell. It also saw Kim blowing across the guitar strings during part of the song for an interesting effect and had Chris back to vocals only, instead of using the prior Gibson ES-335, taking a break from guitar changes between songs.

Cornell’s vocals were very good this evening and reinforced his status as one of rock’s best vocalists alive today and his presence is sensational as all eyes follow him as he wandered around the stage. The coverage of material from the Superunknown album was substantial so that when Cornell’s vocal power kicked in for ‘Fell On Black Days’, ‘The Day I Tried to Live’ or ‘Like Suicide’, amongst others, it was clear why this band still has a following decades later. The rarely played ‘Birth Ritual’ plus the old tracks such as ‘Flower’, allowed for some contextual banter about the circumstances surrounding the songs. In short, the music of Soundgarden came about from having an attitude of being all about the music and not the business trappings. Wrapping up the main set with some minimal lighting and back lit effects, ‘Burden in My Hand’ was done superbly well, with the crowd singing the chorus with volume and even singing the verse lyrics back to the band.

As the encore commenced, bassist Ben Shepherd moved up to the centre stage microphone to introduce ‘Outshined’. More at ease, he wandered over to Kim’s side of stage briefly to then return to position whilst during the songs, Kim let fly yet another understated, wah pedal powered guitar solo. As the last two tracks ‘Kickstand’ and ‘Slaves & Bulldozers’ were performed, the crowd seemed pretty satisfied even if some other well-known tracks such as ‘Rusty Cage’, ‘Hands all Over’ and ‘Pretty Noose’ were omitted from the set list. To cap off the two hour set, Soundgarden opted for some brief Led Zeppelin covered blues inspired references before providing some experimentation with sonics sans drumming. As Kim pushed on the strings to generate rising tones with feedback, Ben played long sustained notes on his bass that made the bass bins work the air. Meanwhile, Chris Cornell was on his knees, in front of his pedal board, coaxing sounds to increase the ending that was largely oppressive, atonal cacophony that might have been a musical statement or just some fun.

As Kim left his guitar ringing out noise above his amplifier head whilst he enjoyed a post set beer, it was clear that the show was done and dusted. It was an apt way for such a creative musical force as Soundgarden to finish the job. It was a sensational effort of career spanning material that showed to those present how undeniably creative and yet totally music focussed a hugely successful band can be in the live setting after years of enduring a fickle industry. Great stuff from start to finish.

Set List:
Incessant Mace
Hunted Down
Drawing Flies
Ugly Truth
Jesus Christ Pose
Spoonman
Kyle Petty, Son of Richard
A Thousand Days Before
Like Suicide
Blind Dogs
Flower
Beyond the Wheel
Been Away Too Long
The Day I Tried to Live
My Wave
Blow Up the Outside World
Fell On Black Days
Black Hole Sun
Birth Ritual
Burden in my Hand
—
Outshined
Kickstand
Slaves & Bulldozers