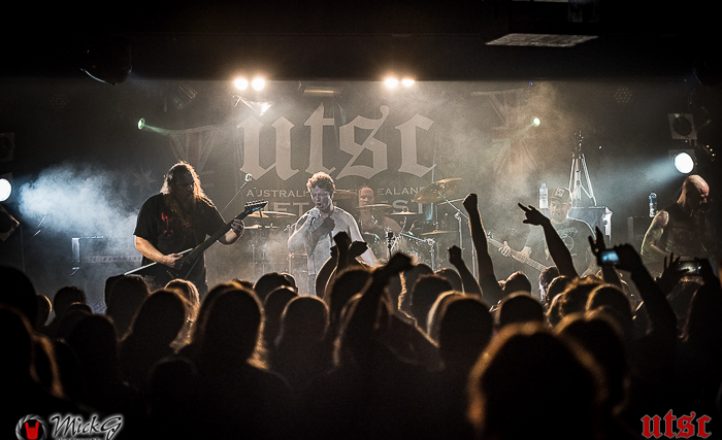 Bald Faced Stag Hotel, Leichhardt NSWApril 29, 2017
Sydney’s annual Under the Southern Cross Festival has become an important event on the underground calendar and in the newly-expanded band room at the now pokie-free Bald Faced Stag Hotel it was a hotly-anticipated reunion show by Melbourne death metal pioneers Abramelin that ensured the crowd had come from far and wide tonight.

That shouldn’t take anything away from the rest of the line-up, which also included Frankenbok and Truth Corroded, both making long overdue returns to the Harbour City, Kiwi visitors Stormforge and Silent Torture and the Sydney debut of Night Legion, among others.

Spread out across the width of the stage with no less than three guitars unleashing their minor key melancholy, Illimitable Dolor provided some early afternoon gloom with a slow, immense funereal plod that rolled like a crushing tide over the room. Black Rheno have been everywhere lately. It could even be they’ve played a little bit too often, which may account for the poor turn out they had for their set, but they weren’t to be perturbed, tearing out slabs of bass-less sludgy metal as vocalist Milla prowled the stage like a caged lion. Adelaide grind legends Sickness were a lot of fun, like a more irreverent version of Napalm Death. Their guitarist was the source of amusement as – forced to sit due to broken strap – he constantly interjected while not so much playing his instrument as abusing it, finally tossing it away at the end of the set.

Silent Torture are an Auckland five piece who played some good meat and potatoes-style death metal, although they could have been a bit tighter, and their frontman was a bit too reserved, especially between songs, but they didn’t let the side down. Since reforming a while back, MurderWorld have consistently reminded us all what a powerful thrash metal force they were, and this afternoon was no different, smashing it out of the park with a solid and intense performance. Queenslanders Eternal Rest were also on their game, stepping up with some violent and heavy technical death metal blasting, including some staunch offerings from their latest album which they were introducing to Sydney today. Come back soon, lads.

Heading back inside after a brief sojourn to the beer garden where many of the punters were enjoying the afternoon sun, New Zealanders Stormforge were flattening the crowd with an immense, storm-the-castle-walls style epic metal. With a sound so huge it’s like there are four guitars instead of just the two, and an extra three or four other dudes lurking around instead of the five actually on stage, their mighty set was a solid hit with the growing crowd.

Adelaide stalwarts Truth Corroded have been active for longer than any other act on this bill. In spite of their many, many line-ups they never put a foot wrong and even tonight with a stand-in drummer (Adrian Griffin from Lo!) they were like a machine. Greg Shaw has one seriously devastating bass tone that drives the groove and Jason North’s vocals are a study in power and control. The time was now right for a drastic change of pace. All dead-eye stares, black leather and face paint, Rise of Avernus delivered a set of blackened doom. In front of backdrops and swathed in a somewhat pungent fog, their howling plod was in striking contrast to the high-energy bands that bracketed them, a visually and aurally impressive performance.

Up then stepped new power metal force Night Legion, the latest band for Sydney shredder Stu Marshall. This is exactly how it’s described, true power metal with scorching lead guitar, thundering double kicks, galloping bass lines and the soaring vocals of Vo Simpson. With song writing more along the lines of Marshall’s Empires of Eden project than the hysterically over-the-top Death Dealer, there was plenty of air-punching moments and some ridiculously high notes from Simpson who seemed to truly revel in the role of specialist front man.

“We haven’t played here in fucking ages!” Frankenbok declared a short way into their barnstorming set, and that’s true. Indeed, the last time they came was with a completely different line-up. Now fronted by ex-Scar the Surface vocalist Dan White, they are no less a force than they have always been, a highly-charged, high-energy metal machine. They hit the room like they own it, White disappearing into the crowd, Azza stomping every inch of the stage as he teams up with Reiki Barbosa and Tim Miedecke to pound the Stag with an arsenal of groove, a prime example of how a constantly-touring engine should perform – at nothing less than full throttle.

At last, it was time for the event that had brought so many to the venue this evening – the return of Abramelin. Almost no one was left outside as the band prepared their first assault on Sydney in fourteen years. I haven’t felt this level of anticipation in a crowd at a local show in a long time. Then it came, as Abramelin unleashed the first crushing wave of death metal upon the Bald Faced Stag, guitarists Tim Aldridge and Matt Wilcock working in tandem to generate some of the most iconic riffs in Australian extreme metal. Simon Dower expanded his chest and released the deep and powerful roar that is his signature. This is death metal the way it was meant to be, a sinister and violent battering from blood-soaked songs. Abramelin are truly fearsome in intent and delivery. Bludgeoning riffs are propelled by the ferocious drumming of Dave Haley and grind-laden bass from Rob “Wog” Mollica, Dower’s vocals genuinely demonic, a bowel-quaking rumble of infernal enormity taking the band through gore-ridden atrocities like ‘Deprived of Afterlife’,‘Germ Factory’, ‘Pleasures’, ‘Spiritual Justice’ and ‘Plague’, closing out their monstrous set with ‘Flesh Furnace’ to a roar of approval from the hordes assembled. After almost a decade and a half Abramelin had lost none of their menace and the ninth edition of Under the Southern Cross was probably the greatest yet.