Home > Live Reviews > Splendour in the Grass – Day One 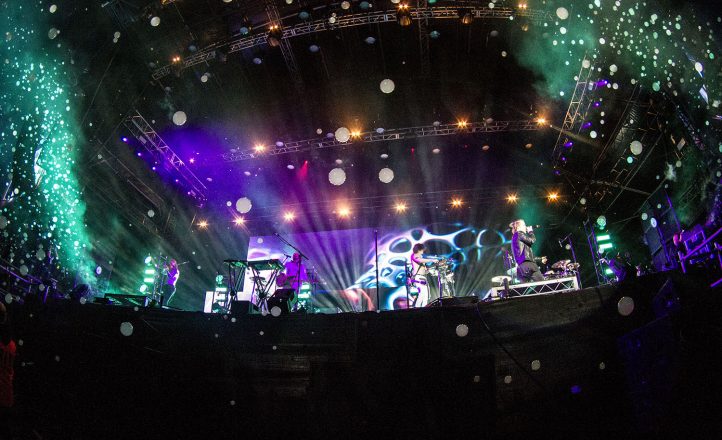 Splendour in the Grass. A celebration of arts, music, camping and drinking in the picturesque North Byron parklands. The first thing to remember is if you arrive late on Thursday, you’re going to be camped miles away and come Monday morning, stuck in traffic for quite some time. That’s where I find myself now, in a line of cars, trying to recount one massive weekend of music, art and out-there fashion choices.

Thursday evening saw myself setting up camp in the dark, familiarising myself with the area for those long, drunken walks back to bed, and sinking a few tins to pre-party acts GL and Sampa The Great. A hidden tent saw hot cups of chai served while girls painted each other in UV paint. Some like to take it easy on the first night. Others go hard right from the get go, and judging by the amount of people with jaws sideways, going hard was the flavour of the weekend.

Friday morning saw Melbourne hard hitters Ocean Grove open up the dust bowl at the amphitheater, throwing rolls of toilet paper into the crowd and generally causing a ruckus as the first circle pit of the weekend ripped it up. The gorgeous Vera Blue took the stage at the Mix Up tent to a massive morning crowd, looking resplendent in a frilly, silver body suit. With most tracks taken from her recently released debut album ‘Perennial’, she was an early favourite for many.

Climbing to the top of the amphitheater hill almost killed me, I’m not a fit guy, but the view of rockers Kingswood as they performed their cover of Destiny’s Child’s ‘Say My Name’ complete with confetti cannons was well worth the trek. Drinking tins in the sun with mates as Tash Sultana rocks out on stage, is there anything more Australian? We’ll throw in a few punters doing shoeys and that’s about as Aussie as it gets.

One thing to note about Splendour is the fashion. The entire festival, Australia’s version of Coachella or Glastonbury, is one big Instagram shot of fashion. Girls in little more than see through skirts and bikinis, guys in rompers, denim overalls and glitter, so much glitter. Also that one person dressed as a Unicorn!? But come sundown, if you weren’t already twelve $10 beers deep in an alcohol blanket, you were gonna have a bad time. It got cold. And fast.

Back at the tent to grab my most fashionable denim jacket, and as many drinks I could drink to last the night, I ran back in for US rapper and buzz item Lil Yachty. The packed out tent was jumping, punters climbing the tent supports as Yachty stomped the stage.

Main stage was where it was at though. Peking Duk threw one hell of a party. A nonstop explosion of colour, confetti and an endless stream of guests. Vera Blue, Ben Safia, Aluna George and many more. ‘Fake Magic’, ‘High’ and monster single ‘Stranger’ had the entire amphitheater jumping, fuelled by the music and as many caps you could get past the cute sniffer doggos.

The sisters that make up HAIM were the perfect comedown after that party, cruisey rock and roll, and Este Haim’s bass face was amazing to watch. Over at the GW McLennan tent, Father John Misty was peddling his brand of stripped-backed folk tunes, a soulful affair.

Grabbing a few more tins before heading back to the main stage for headliners The XX, the crowd was loving the smooth tones from frontman Jamie XX with ‘Say Something Loving’, ‘On Hold’ and ‘I Dare You’ garnering big responses. Less of a party, more of a love in.

I didn’t hang around for the set end, opting to party off that extra energy I found during Peking Duk down in the teepee forest. The rest of Friday is a bit of a blur from then on.