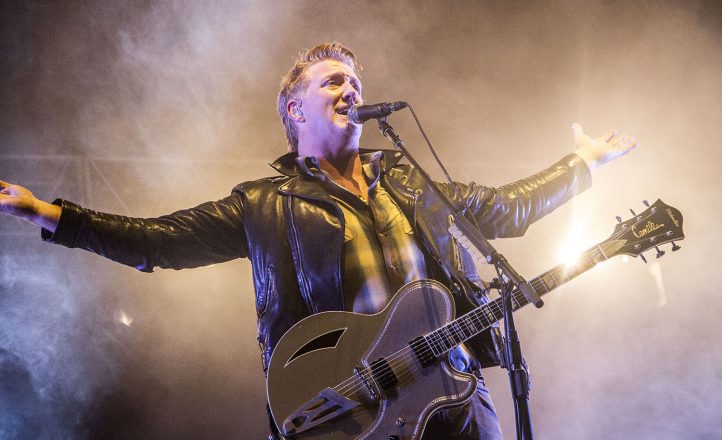 Day two of Splendour starts a little later for me, no hangover yet surprisingly but two days of dust, sun and cans is starting to catch up on me. A few breakfast beers and a wet wipe bath because fuck lining up for a shower at a festival, and I’m feeling like a new man.

Making the long walk into the festival for Windang two piece Hockey Dad, the lads belted out some cool indie surf rock to the large early crowd. I wonder if any of these people have slept yet?

A quick lay in the grass on the hill and then it was back in the pit for Tassie boys Luca Brasi. Walking on stage, kicking footballs into the crowd, one fluke kick hit the rafters before bouncing down into the drum kit to a massive cheer. The amount of shoeys consumed during their set was fascinating, even more so was the skipping rope in the middle of the dusty circle pit. Hard hitters ‘Aeroplane’ and ‘Say it Back’ had the pits swirling dust high.

A massive crowd had amassed at the amphitheater for Brisbane trio Dune Rats who delivered a high octane set. Arriving on stage on dirt bikes, they belted out huge tracks like ‘Six Pack’, Scott Green’ and ‘Dalai Lama’. The crowd was kept busy bouncing huge inflatable beer cans, balloons filled with confetti and being rained in streamers. Not to mention the crowd surfers and circle pits. A surprise cover of Grinspoon’s ‘Just Ace’ featured the man himself, Phil Jamieson before closing with singalong ‘Bullshit’.

A secret party invite from Samsung found myself and 100 others down by the lake watching Two Door Cinema Club play an acoustic set inside an old boat house, complete with free beers, food and an old bus to hang out in. Back at the main stage, I arrived in time to catch the man, Bernard Fanning. A massive backdrop of space and time played alongside his folk tunes, the crowd hanging on his words. Unfortunately I left the arena to catch Dope Lemon before the boys from Powderfinger joined him on stage, a massive regret on my part.

Dope Lemon’s stoner folk vibes had the crowd entranced. Slow, drawn out acoustic chords, beautiful harmonies, cruisey vibes, good times a plenty and a giant lemon smoking a blunt on stage. Angus Stone is a master of his craft.

A couple of tins back at the tent with the neighbours before a quick dash back to the hill for the hotly anticipated Catfish and the Bottlemen, who lived up to the hype. The four Welshmen put on a rocking good time, complete with massive light show and Splendour confetti cannons. Tracks like ‘Tyrant’ and ‘Cocoon’ garnered huge sing alongs from the packed out crowd.

I made my way over to the Mix Up tent for Aussie hip hop artist Allday, grabbing a kebab from one of the 60+ food vendors along the way. Allday is a bit of a small bloke in stature, but he knows how to command a crowd, the large audience was jumping to every slick beat and smooth rhyme. One sad moment in the set saw a girl in the front row drop an entire bottle of rum handed to her by the rapper. I couldn’t stay for the entire set as Royal Blood were about to take the stage, rushing back in time for the two piece to decimate ears.

Bassist Mike Kerr exudes cool in a black jacket, sunnies and perfect hair as he lays down some massive riffs complimented by the driving drum beats courtesy of Ben Thatcher. The pair crushed all in attendance with monster tracks ‘Figure It Out’, ‘Little Monster’ and ‘Ten Tonne Skeleton’.

A bit of time before headliners Queens Of The Stone Age were due on I found myself at the GW McLennan tent for Mr Paul Kelly, a man I haven’t seen in over a decade and who still sounds as amazing and can leave an audience hanging on every word. A new generation of fans had gathered, largely thanks to his cover with A.B Original, and all were left speechless as he ran through a set of Aussie classics including ‘Dumb Things’ and ‘To Her Door’.

Finally to cap off a spectacular day two of sun and tunes, Queens of the Stone Age graced the main stage to a packed out crowd. Beers had been sunk, energy was high and Homme and Co delivered a rollicking good time. Opening with the grinding ‘…Millionaire’ and the runaway truck that is ‘No One Knows’, the crowd kicked it up a gear as bodies climbed one another. Guitarist Troy Van Leuwen ripped into those riffs like a dog with a steak, playing off Homme. ‘I Sat By the Ocean’ gave the crowd a brief respite, before ‘Feel Good Hit’ smacked them back. One thing to note: don’t heckle Josh Homme. He will destroy you in front of thousands, as one punter learnt the hard way.

New single ‘The Way You Used To Do’ is a dirty, southern driving song, a definite hit from the band, though without trying to to sound old or elitist but their older material creates the bigger buzz amongst the crowd; harder, heavier and louder, the amphitheater roars during set closers ‘Go With the Flow’ and ‘Song for the Dead’.

As the main stage filtered out to continue the party elsewhere, I followed suit and found myself more beers and more stages to dance the night away.