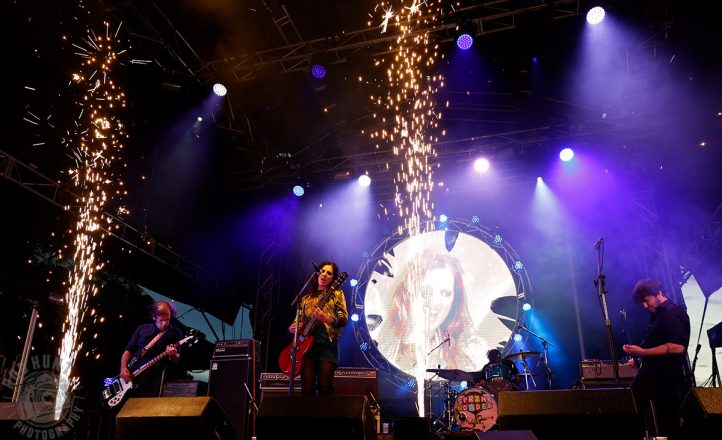 Spring Loaded: the little festival that could.

After a horrendous 2020 and multiple dates rescheduled, it almost all came crashing down only days before the first iteration of the touring festival could kick off. Four months of no COVID transmission and everything almost came to a grinding halt due to excessive barbecue shopping. Praise the gods of rock that outdoor events were not crossed off the list. The music industry are well aware of how much the Government hates live music. Thankfully, football is also played outside and we simply cannot cancel the football, so things went ahead as planned.

Despite the added precautions, Saturday turned it on with a gorgeous sunny afternoon, perfect for drinking beers on the lush gardens at Randwick Racecourse. First cab off the rank for this nostalgia-filled afternoon of nineties rock, were Sydney groovers Caligula. A weird amalgamation of 90s techno beats and grunge, strangely bass heavy for a band that features no current bassist. Frontman Ash Rothschild snakes across the stage, punters splayed across the grass, already sinking tins.

Former Triple J presenter and sometime Frenzal Rhomb guitarist Lindsay ‘the Doctor’ McDougall laid down the ground rules in his role as MC: no kissing strangers, no spreading germs and, sadly, no moshing.  Up next came Brisbane shakers Screamfeeder. Big, distorted guitars, bass thumping and driving rhythms push that retro pop, lo-fi indie, guitar anthems, whatever you wanna call it, it’s good! Bunny, Dart, Sonic Souvenirs, The Space That’s Left, all cracking anthems from a band that’s been miles ahead of their contemporaries since their inception three decades prior. The sound was crisp and loud, with ringing ears being this reviewer’s sonic souvenir.

Hailing from the coastal waters of Tarawanna, Tumbleweed ripped us all a new one with their crushing, hazy stoner rock. Unashamedly heavy, Sundial opened the set with its ear worm chorus of “Mary Jane”. From then on it was wave after wave of fuzzy goodness:  Daddy Long Legs, Stoned and the driving drumming of Silver Lizard. Richie Lewis twists and turns with the music, tambourine never far from his hand. The rock hard sounds of Mountain close out the set, Lenny Curley’s guitar ringing out, the noise flowing over the crowd.

Who knew Custard frontman David McCormack voiced Bluey’s dad Bandit on the hit children’s show? Not I, and apparently not a lot of others, as the familiar voice took the stage to a crowd of middle aged rockers who have probably sat through more kids television than thought possible. Nonetheless, the indie rockers plugged in and pumped out a hell of a lot of songs. Couples Fight, Pinball Lez and the big one, Girls Like That (Don’t Go For Guys Like Us). This reviewer is slightly ashamed to say he was late to the party with Custard, but after that rocking display, I shall be spinning more of their records on rotation.

The first time I saw Magic Dirt they had the unfortunate task of playing before Slipknot at Big Day Out 2005. 16 years later I get to witness them with a crowd of adoring fans. Ever the rock goddess, Adalita is the perfect reincarnation of everything that rock n roll is, was and should be. Huge guitar riffs, quality banter – “Look at ya, you fuckin’ drunk pigs! Let’s drink some beers!”- and a rip tearing sneer. Pace It and White Boy, the sun setting over the eastern suburbs, flocks of bats taking to the skies, cold beers and rock n roll, nothing better in life. Plastic Loveless Letter, Supagloo and Dirty Jeans – so much filthy rock in one set.

A bit of a feed and a sit under the enormous figs of the Racecourse gardens was needed. These old knees can’t handle the rocking after twelve months away from festivals.

Returning to the stage, The Doctor stepped up to ask the audience to all take a step back and spread it out a bit. Apparently the boys in blue were getting a bit antsy. I assume as they haven’t been able to strip search festival goers for over a year. He then introduced the next act without needing to leave the stage: Frenzal Rhomb. One of the only bands to acknowledge the land they were playing on and to decry the cruelty that comes with horse racing as well (Jay referred to the venue as “this monument to cruelty” early on), though mostly with a bunch of terrible horse puns and dad jokes. Stand Up And Be Cunted, Bird Attack and the crowd screaming along to Russell Crowe’s Band proved once more why Frenzal are the most Australian band ever.

Whilst security did a fantastic job of crowd control, over zealous police made things worse, forcibly ejecting anyone deemed to be breaking social distancing rules. Playing host duties, McDougall tried to calm the crowd, but good luck with that during a Frenzal set. The show continued with slow number, I Miss My Lung, picking up again with Mr Charisma. Everyone knows the lyrics to every song, every song is a number one hit, and as the song suggests, I’ve Never Had So Much Fun.

Coming in to the business end of the night, the crowd were getting a bit cosy here and there. After seven hours of sun and cans, inhibitions loosen, the crowd was closing up, not yet a mosh but certainly flaunting social distancing rules. The Doctor and “Head of Security” Murray Cook, drafted from the audience, asked for calm one more time before West Aussies Jebediah exploded out the gates with Animal. Flitting between melancholy gems and grinding guitars with big vocal anthems, usually all in the one song, Kevin Mitchell led the singalongs. She’s Like a Comet, Military Strongmen and the raucous Puckdefender, it’s sometimes easy to forget just how many hits the Perth collective have released upon us over the years.

Leaving Home, Harpoon and Fall Down, all massive anthems, this reviewer’s voice is still missing a day after from singing at the top of my lungs, air guitaring along to the jangly guitars of Mitchell and Chris Daymond. Ripping us with one more, Jerks Of Attention, had the crowd forgetting social distancing once again.

The night was feeling electric, the first Sydney festival in a year had defied the odds, and apart from a few spot fires, people were being behaved. That changed when Grinspoon burst into the world screaming DCx3! High flying frontman Phil Jameson kicked and popped every corner of the stage in those few short minutes. With a career as storied as Grinners, you know the set list is going to be jam packed with nothing but goodness. Lost Control, Just Ace and Hard Act to Follow kept that energy flowing.

It was always going to be difficult to contain 5000 drunken punters, starved of live music for a year, and the set was stopped a number of times as The Doctor played against type to plead for the crowd to restrain themselves lest the Gestapo shut it down – which almost happened at least twice as 40+ police officers moved into the crowd at the front of the stage. After these stoppages, the vibe was less than electric, and Jameson pulled out the acoustic to slow things down a bit, Sweet as Sugar, Don’t Change and Chemical Heart getting huge reactions from the crowd. As the set drew to a close, a sense of “stuff it” filtered through and the band ripped through Champion and More Than You Are to give Spring Loaded, the first outdoor festival in Sydney in over a year, one hell of a send off.