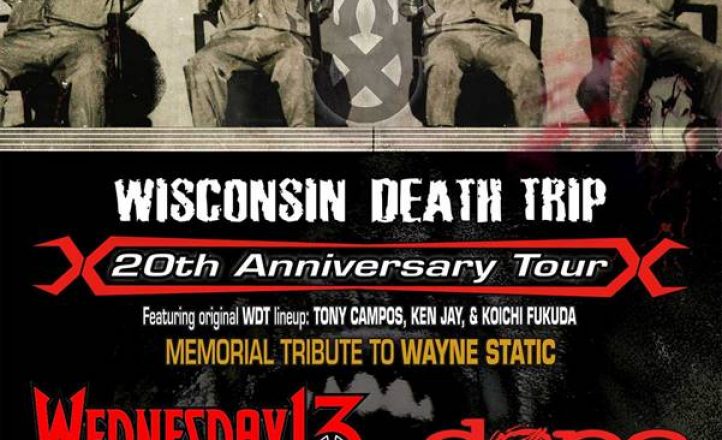 Static X came to the fore in the nu-metal explosion of the late 90s and early 00s with something that was creatively different from even the music and posturing that was going on around them at the time. Releasing six albums and remaining relatively popular throughout their career, the darkness of booze and drugs lead to an inevitable split in 2009 and the eventual sad passing of iconic frontman Wayne Static.  With the passage of time and the healing of interpersonal difference and reflection on past victories, bassist Tony Campos decided to get the wheels rolling in celebration of Wayne Static’s life and career and the 20th anniversary of the bands most popular and debut album Wisconsin Death Trip.

Along for the journey on the Australian leg of the tour is Dope, a band similar in sound to Static X and whose vocalist is rumoured to be the identikit vocalist Xero currently filling in that band’s frontman slot, as well as Wednesday 13, a band that, I will admit early, I have never really felt the drive to check out beyond when they first arrived on the musical radar, predominantly through my personal disinterest in bands that use a lot of make up and a fancy schtick.

Dope open the night with their best known song ‘Debonair’, a sure fire bouncy industrial piece that gets the floor moving and some older fans inside to check out what is going on.  Half way though the set vocalist Edsel Dope addresses the crowd in respect to Static X and paying respect to Wayne Static, making a Freudian slip, perhaps forgetting which band he was fronting before quickly recovering his train of thought. Maybe I am suspicious but if he is fronting two bands, how well will he go a little later in the night?

As stated earlier I have never really given Wednesday 13 much time. I have Alice Cooper and Marilyn Manson to thank for giving me everything I need in the shape of theatrical heavy music. I am a lover of live music, however and always ready to give anything a go in the live environment, and I am glad I did.  Disproving any preconceived judgements about the character of Wednesday and his dark band of misfits are musically tight and entertaining. Wednesday appeared in a cloak and mask, and covered in corpse paint, fitting in four costume changes in a short set, as well as having the ability to stalk and writhe around on the floor like a demented Iggy Pop in full flight.  A live set that was thoroughly entertaining enough to send me back to check out the bands back catalogue over the next few days.

The moment the assembled masses have waited for is here as the intro tape plays ‘December’. The last track of the band’s first album reminds why we are here: to celebrate Static X and Wayne Static’s output.  The first album is played through, but not chronologically. That would be too easy to gift a baying audience.  Static X show off their depth by playing a smattering of tracks from their Machine and Cannibal albums.  Tony Campos, guitarist Koichi and drummer Ken Jay obviously enjoy playing this music and playing together, but whoever is behind the mask of Xero does a perfect job as a facsimile of Wayne Static.  The vocals are so well done that a casual fan may not know it isn’t Wayne Static if it wasn’t for the mask. Even his hair defied gravity.

As the band belts out ‘Push It’ to close the set, it is obvious that the band has missed playing together as much as those here have missed seeing and hearing this music live. Whether this is a one off celebratory tour or they come back on a touring cycle for the album currently being assembled, it was a great experience to witness to the legacy on display.