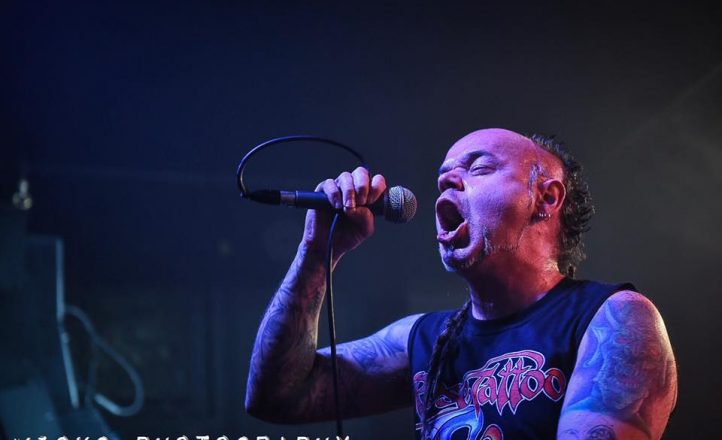 Steel Assassins has now become an established date on Sydney’s metal calendar and the team always manages to make it a special event with an international special guest or rare live appearance. The Stag was buzzing when we arrived about halfway through the first day’s play with a reasonably sized crowd drinking the bar dry. Snowleopard, Wartooth and Hidden Intent had already left a few eardrums ringing and veteran campaigners Ion Drive were about to play their first ever Sydney show.

When we say veteran, we mean it: this Melbourne three piece has been around since 1981. Not really knowing what to expect from a band that’s existed for more than 35 years and only just put out its first EP, Ion Drive’s music comes as a nice surprise, loud heavy metal along classic lines with strong clean vocals, neat soloing and old-school hooks, with frontman Ross Percy making a few amiable dad jokes between songs.

Despite having the least awe-inspiring name, Mason know how to craft some rapacious thrash metal. Two seasons spent touring internationally have forged them into a machine as they fire off savage, razor-laced riffs and prowl every inch of the Stag’s stage in their mission to bring metal to the people. Energetic and ferocious, Mason’s set seems to end all too soon.

Consistently one of the best bands on the live scene, Dreadnaught had coaxed more than this little black duck out for the occasion tonight, with quite a few others making the effort just to see them. Ripping straight into ‘The Push’, the band are not about to disappoint. Even with a couple of stand-ins for the evening, drum monster Rob Brens and Scottie Anning from Desecrator, there’s nothing less than a top-shelf, powerhouse live show being handed down. The set borrows from across their rock-solid catalogue, vocalist Greg Trull once again unleashing a fearsome coiled-snake performance.

Headlining tonight’s chapter of the event was BB Steal, Sydney melodic rock campaigners of yore now returned to semi-regular gigging. Craig Csongrady has traded off his top range for a lower-register growl these days and the formidable guitar team of Kevin Pratt and Warren Mason hasn’t faltered one bit as the band power through a set heavy on tracks off their On the Edge album. Ex-Heaven hitter Theo Katz provides a solid backbone for Pratt and Mason’s double harmonies as the band take the crowd back to the rock dives of the late 1980s, sprinkling in some Boss tunes – ‘Hard N Fast’, ‘Strange Games’ and the classic ‘Kick Ass (Rock N Roll)’ that closes the night – along the way. A fun band from an earlier time that wraps up an evening of solid Australian live music.