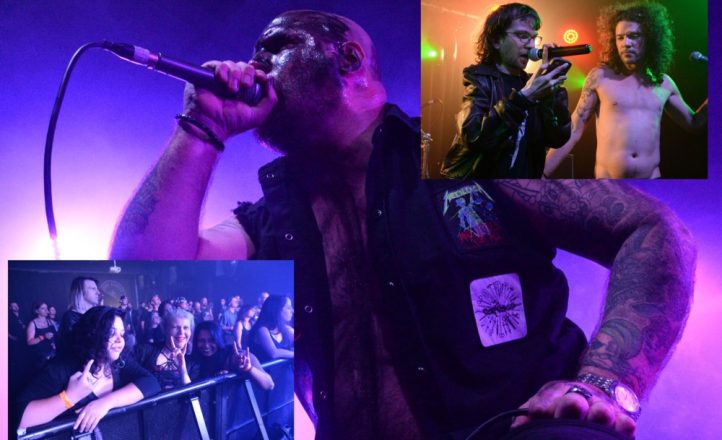 Back at the beginning of the century when it seemed like small local metal gigs were going the way of all flesh there was a stand of promoters booking shows wherever they could to keep the scene from sinking. Stigmata Productions was one of those, and 15 years later they are still putting together quality bills of local metal talent. Misery’s headlining status after long years in absentia probably brought a few old heads along, but the entire bill was strong from bottom to top.

Local Sydney deathsters The Plague had the stage when I arrived, ripping through some furious, heads-down, Swedish inspired brutality and putting on one of the best and tightest shows they’ve offered so far. Vocalist Mike Ryan was particularly on point this afternoon. As a direct contrast, Illimitable Dolor set the Stag rumbling with a mournful doom powered by three guitars and embellished with sombre, surging keys. They don’t offer much in the way of on-stage dynamics but the immensity of their sound is crushing and the slowness is almost trance-inducing – plus they closed with a Skepticism cover which is never a bad thing.

Metreya have rebounded strongly lately, opening for Anvil a couple of weeks back and landing a good mid-bill slot here today. New vocalist Dave Tinelt adds a rawer, gruffer vocal edge to their thorny thrash metal. He is also possessed of a strong and infectious stage presence that riles up the room.

Of all the bands that played today, Devine Electric probably stood furthest apart from the rest musically but their blues-fuelled hard rocking and Eli Reskov’s rock star moves delivered some respite from the crushing metal blast-fests being handed down by the rest of the bill. They also provided one of the stand-out moments of the entire day by inviting Malcolm Young’s son Ross out on stage to sing lead on ‘Down Payment Blues’ in tribute to his dad. Acquitting himself remarkably under the circumstances, he then called for them to play ‘Riff Raff’ and Ivor Radocaj obligingly led the band into the song, immediately joined by a crowd that had suddenly swelled to almost fill the room – a truly special moment.

Another the less metal-oriented acts, The Veil, unfortunately fell foul of some technical troubles which forced them to cut their set short. Che de Boehmler offered a wry “Well if you don’t like us, you’ll get much less of us now” before their mesmerising two-song performance of minor-key light and shade. For a band with this much depth, it wasn’t near long enough.

Daemon Pyre faced no such dramas, sweeping the room with a strong set of aggressive and speedy death metal, bristling with barbed melodic guitar lines. Led by the warpaint-daubed Sam Rilatt, Daemon Pyre were (…er) on fire this evening as they ripped into what was the biggest crowd of the night so far, wrapping up a busy year for them with a vengeance and a taste of what promises to be some pretty savage new material.

The Levitation Hex seem to have been fairly quiet this year but as soon as they hit the stage there was no need for the blowing out of any cobwebs. Armed with eight-string guitars and an enormous six-string bass, the Canberra four-piece wove a dark and layered spell ringing with slide guitar and the booming dual vocals from Adam Agius and Mark Palfreyman. An abundance of incisive, technical drumming helped fuel an immaculate set of intricate and interesting music.

Then it was time for Darker Half, another band that never fails to deliver and in true form they started out strongly. But a man has to eat some time and the bistro was closing soon, so I had to leave them to themselves and their crowd and fuel up for the final leg of the night.

Segression is a band that has always split allegiances. This evening the line was divided between the crowd in the main room waiting to see them and the group in the bar watching all-female four piece Dawn bring down their window-rattling drone-like doom. In the other room, the Wollongong veterans were ripping through another high-energy set of stomping groove metal, never still for a moment, Sven and MK trading leads, Chris Rand – whose vocal has developed into a very deep roar – regaling the crowd with old memories and paying tribute to the recently fallen Mick Burke by pointing out the plaque to his memory on the wall.

There was nothing left for it now but the legendary Misery, one of Australia’s finest and heaviest death metal bands. Back in their classic four piece configuration with the addition of Laceration Mantra’s Glen Phillips on guitar, Misery swept all before them in an unrelenting display of classic metal extremity. It was like they’d never left, like they hadn’t been gone from the stage for a decade. From blast beat fusillades to slower, doom-ridden numbers, the Queenslanders battered the Stag into submission with a furious cocktail of massive riffs, punishing drums and Damon Robinson’s all-conquering, rumbling roar, invoking monstrocities from across their catalogue. Like a precise metal bulldozer, Misery crushed and rolled over everything in their path. What a glorious end to the day. 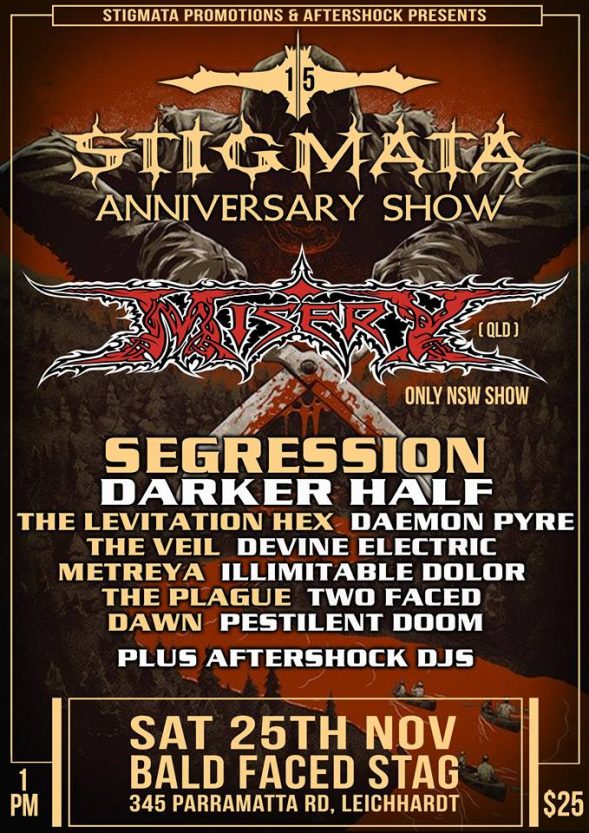