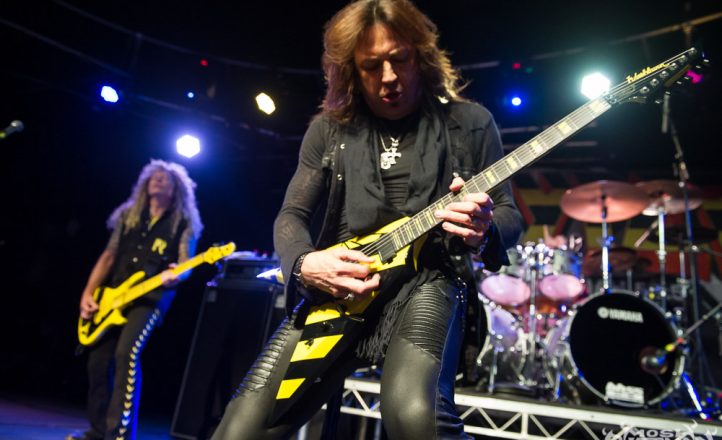 Stryper are well known for their bold approach of using their music as a vehicle to share Christianity globally. If they were just another LA rock band from the eighties, they would have imploded long ago. As it is stands, they have survived many setbacks but with the latest one being the absence of co-founding guitarist Oz Fox from the live set due to serious health concerns, the tour looked destined to be postponed, at best.

Eight years since they were last here as four piece band, they returned as a three piece, making the best of a bad situation. Most bands would have caved in a similar scenario under the weight of egos or a lack of courage.

First up tonight was local three piece Gypsy who played some old school heavy metal. Guitarist and vocalist Tommy Adams seems to like a somewhat brittle lead guitar tone but that may simply be a result of harmonising effects. His vocal delivery is strong with some falsetto moments and with second track ‘In the City’, he added some interesting guitar solos.Bassist James Squier and drummer Billy Gillette were very solid with the former delivering some decent backing vocals.

A cover of Kiss’ ‘Love Gun’ was followed by songs such as ‘Witches’, providing a galloping groove and a half time section. As per usual, the band threw balloons and pulled pop-gun streamers across the audience which was amusing given the headliners penchant for dispersing the scriptures into the crowd. Another fast paced tune came with ‘Don’t Trust the Night’ that barreled straight into a cover of ‘Hell Bent for Leather’ to close the set.

Taking a turn into melodic AOR territory was the second support,  Melbourne’s The Radio Sun. Metallers may know guitarist Stevie Janevski from Black Majesty; anyway, the project here is commercial fare and given their recent overseas festival success they seem to be onto something.

Opening with ‘Tell Me What You Want’ from Heaven or Heartbreak, the energetic guitar playing of Janevski and his use of centre stage during solos showed a player adept at fitting the role that the material required. Front man Jason Old added punchy guitar to his catchy vocals that White Lion and Journey fans would enjoy. Rhythm section Anthony Wong and Gilbert Annese contributed good backing vocals during tracks such as ‘Heaven on Earth’ from Unstoppable and the Wrong Things Right title track.

The pop choruses continued with ‘Can’t Get You Out of My Head’ followed by slightly heavier songs about the world going crazy. Discussing their new album titled Beautiful Strange and praising the headlining band, they still played material from the previous album with the song ‘Tonight’s the Night’ to close their set. Janevski’s solo was succinct and tastefully played. The Radio Sun clearly have a plan which is commendable.

As the changeover took place with Van Halen and Iron Maiden songs pumping, the crowd were soon surprised to see Stryper front man and guitarist Michael Sweet appear at a side of stage microphone to pre-empt the headlining set. Announcing the band were appearing as a three piece due to Oz’s situation, a recorded spoken message from Fox was played over the PA to introduce the show.

From the start, Sweet’s subtle self-deprecating humour was present. The touring band took their positions and as the pre-recorded choir vocals kicked off ‘Yahweh’, Stryper were off. Drummer Robert Sweet played behind a silver painted double bass drum kit, extending his arm right back behind his head on each hit. Michael Sweet’s vocals filled the venue with a formidable vocal power. His vibrato and projection is astonishing and he still manages to unleash some falsetto when needed.

New bassist Perry Richardson, from Firehouse, provided musical driven force to fill the spaces when Michael Sweet was playing lead without a second guitar to fill out the sound. During ‘The Valley’ from God Damn Evil, it became clear that, out of respect for Oz, Sweet had chosen not to try to play his solos. From a guitarist’s point of view, it was interesting to hear the rhythms isolated which gave some insight into their melodic songwriting skills.

Bibles were thrown out to the audience a few times during the evening, but it was done during slightly extended banter parts were Sweet did his level best to get through the show without Fox. Most bands in that situation would have cancelled so it was an impressive feat and just proves how a band that has always been on the receiving end of flak are stronger for it. The yellow and black is substantially toned down these days although Richardson’s largely yellow bass guitar, including the neck itself and Sweet’s signature yellow and black striped guitars were present.

The tone from Sweet’s guitar was brilliant with an impressive range and clarity from his signature gear in tandem with two Mesa Boogie amplifier stacks. Simply, both sustained open chords and searing high notes during solos bounced around the cavernous room beautifully. Two solo highlights came within ‘Free’ and the heavier yet reminiscent version of ‘In God We Trust’, with the latter also offering some great vocal harmonies. Before that, an improvised introduction of fluid guitar shredding kicked of ‘All for One’ from Against the Law whilst ‘Revelation’ had plenty of audience sing along.

A change of pace was deftly done with Michael Sweet alone at stage left playing acoustic guitar for a rendition of ‘Lady’ as the crowd sang along in unison. Of course, ‘Always There for You’ saw the three piece returned in pop-rock mode with tight playing and great vocal harmonies.

The classic ‘Soldiers Under Command’ closed out the main set. It is a great guitar track that powers along with a good pace but sadly suffered from the absence of the twin guitar attack and harmony parts therein. A similar concern undermined an otherwise tight and hammering version of encore track ‘To Hell with the Devil’. Some of us have those trade-off solos etched into our brains. Still, the vast majority of the audience embraced the songs in three piece mode, celebrating the pure grit attitude of Michael Sweet.

Naturally the Oz Fox penned track ‘The Way’ wasn’t played for obvious reasons as were a couple of other tracks that die-hards would have enjoyed but all things considered, tonight demonstrated the depth of the band’s musicianship and perseverance. Stryper nobly promised to return to Australia one way or another. Stryper play their music with great skill and strong convictions but do so tactfully.

Yahweh
The Valley
Calling on You
Free
All for One
Revelation
In God We Trust
Sorry
Loving You
God Damn Evil
Lady
Always There for You
Soldiers Under Command
—
Abyss [intro]
To Hell with the Devil.