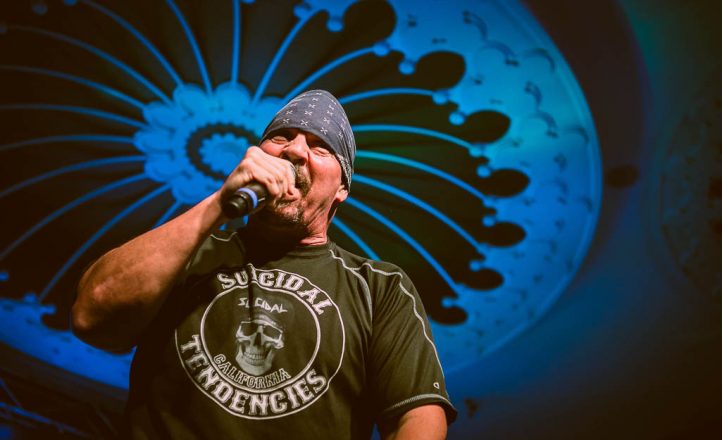 Eatons Hill Hotel is a venue that has been growing in popularity for live shows of all shapes and sizes. Being located on the other side of Brisbane from me meant that I left my cave far earlier than I needed to, although arriving early did allow me time to quench my thirst in the vast beer garden and discuss the evening’s upcoming events with my fellow older punks, all of us who had arrived early.  The excitement was thick in the air as were the jokes thrown around about the age of some members of Suicidal Tendencies and ourselves and how the gig may push the limits of a good night’s sleep. Real punk issues here, kids.

When the doors opened the stream through the door was steady but nowhere near what I thought it would be for a band with as much pedigree as tonight’s headliners.  This meant that the numbers were thin for Gold Coast band Bitter Lungs. Not that they gave a shit, pushing their metallic hardcore onto the punters that were in the room and working the crowd with some great banter, the best of which was “Not bad for a band that broke up in January” and “The bar is over there, make yourselves useful’.

After a very quick changeover Brisbane locals Evil Eye managed to get themselves set and ready to go a little earlier than their allotted time,  vocalist Dave asked the now mostly full venue if it was ok to start early while making a quip about the ‘strict’ time frame they were on. Then came their quality brand of noise, a decent mix of sludge, hardcore and thrash. While the drummer and bassist thrashed around like men possessed, guitarists Dan and Pete plied their trade ably in the background working together to keep the heaviness crushing while Dave crept back and forth across the stage holding the crowd’s attention, his flamingo motif Hawaiian shirt helping take the edge of the heavier aspect of his band’s music.

With the venue filled to near capacity, one by one the members of Suicidal Tendencies come out to the opening refrain of ‘You Can’t Bring Me Down’ as Mike Muir bounds out like a man half his age, bouncing and dancing around the stage. About half way through the opening song was when I realised that my favoured spot front and centre on the barrier was also where the rest of the venue wanted to be with the first of many crowd surfers being passed over my head.

As the band went through a greatest hits set that covered everything from ‘Clap Like Ozzy’ off the last album World Gone Mad to classics such as ‘Possessed to Skate’ and ‘Join the Army’.  Finishing the set off with ‘How Will I Laugh Tomorrow’,  Muir invited the crowd onto the stage for ‘Pledge Your Allegiance’ a rousing rendition with a bunch of us bouncing around on stage like people possessed trying to but failing to stay out of the way as some crowd members attempted to get close to drummer Dave Lombardo while road crew fought back the hordes. After the song closed the band remained amongst the chaos to shake hands and thank those lucky enough to get on the stage and allow us to take a picture or four. For someone like me that has been a lifelong fan of the band this was the best part of the gig. Still a band for the fans.