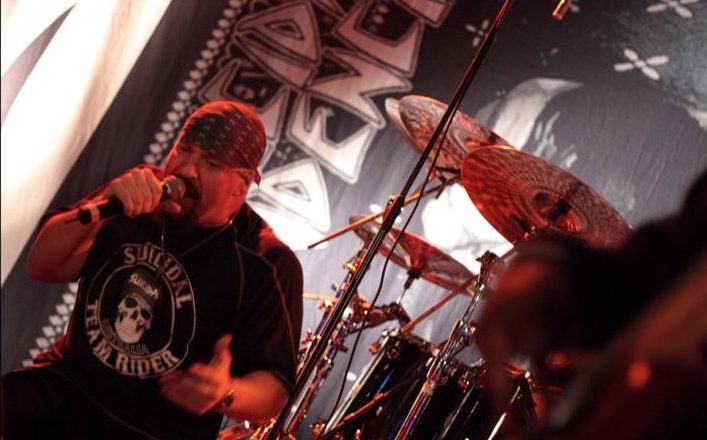 As the cold weather hits Australia, a teeming crowd of metal and skate punk fans moved their way into the sold out Metro Theatre. It was cross over as expected, leaning towards the metal, proving that a hard working, skate-obsessed band from Venice Beach California that peaked twenty years ago can still maintain a fervent following. That band: Suicidal Tendencies.

Happy to be back on a Sydney stage, Toe to Toe let rip a blistering forty five minute set, despite having a fill-in guitarist. Given they’re a six piece with three guitars, that might not be that key an omission as from the off they were churning out the quick riffing. Cut off shorts, a vocalist with a Fuck You and Your Crew t-shirt and most members wearing either caps or berets indicated their look was as important as the delivery and in-the-pocket drumming. Even if the sound mix had a messy start, a venue filling quickly had front man Scottie Mac venturing back and forth across the stage. ‘See in Red’ had a climbing progression with the triple guitars in unison as did ‘Hold Fast’, dedicated to two fallen friends.

A new song had a thrashier, hard edge, thumping drums and lyric of ‘We are not the revolution’. Next came a retro moment to a 1992 7 inch EP track, dominated by bass that even included a snippet of an early eighties hit from Grand Master Flash. As songs got heavier so did the short and fast attack along with brisk drum rolls. The mosh at the front was now moving as cymbal walloping and tight drumming continued until the final song of ‘Live to Win’. Stage banter mostly consisted of rugby league score updates, so I guess they know their demographic.

The place now packed, the ominous Suicidal Tendencies backdrop promised an impending sonic whipping. With Mike Clark and Dean Pleasants on guitars, the band hit the stage with a huge drum kit manned by Eric Moore’s exceptionally commanding presence. Bassist Steve Bruner primarily stood centre stage peeling off solos on his six string bass; vocalist and general shit-stirrer Mike Muir is not one to stay in any one place whilst performing.

Starting their set with ‘You Can’t Bring Me Down’, Muir was like a bull out of a gate accompanied by some mad soloing and solid rhythm guitar. ‘Institutionalized’ had the crowd singing ‘I’m not crazy’ crazily, probably missing the irony. The frontman rants soon started but with a musical, almost free-form jazz improvisation accompaniment. This continued throughout the show and partially diluted the acerbic nature of his tirades. The third track was ‘Join the Army’ which was rowdily infiltrated with numerous instrumental solos over the groove metal and drumming fills.

Another rant and scathing lyrics of ‘War Inside My Head’ were bolstered by funky solos and gave fast breakdowns venom as the first fans began jumping onstage. Fist pumping and Muir yelling ‘You ain’t seen shit yet’ welcomed more of the onslaught.

Launching into a quick commentary about families, Muir referred to the audience as members of the church of ST, and further into the song, the church was addressed as ‘goddamned, motherfucking sinners’. The subsequent drum solo was equally theatric with fast fills and twirling drumsticks or catching drumsticks between cymbal crashing beats. It was quick but damned impressive.

‘Come Alive’ followed and included some more mad solos and dare I say it, a slight blues feel in between shredding and finger tapping runs. It’s in there if you listen for it. Of course, all subtlety vanished with the ball-tearing ‘Possessed to Skate’. It was also an opportunity to introduce the ST skate team whilst preaching Mike’s modus operandi of getting back up no matter what knocks you over like a motivational speaker. The song itself used some tinkering with recent whammy pedal sonics whilst plenty of skaters and fans crowded the stage. At the song’s end, it took a while for kids to clear and at that point, the pace was stalling. Even ‘Cyco Vision’, after with a big build up, lacked a little momentum, and as the song progressed a young girl managed to rip off Mike’s bandana. He didn’t appear to be overly endeared to the lass, and quickly moved off stage as he completed vocal duties. This was just before the encore so a sense of choreographed mayhem did exist. Yet as the band then closed around the drummer to finish the song and exit, well, it wasn’t clear if Muir really was throwing his toys.

So then it was the encore time, and the rocking introduction with fluid guitar solos didn’t stop Muir verbally responding, letting rip briefly about his heritage, lineage and indisputable dedication whilst directing vitriol towards a ‘fat bitch’. It was a bit of a letdown and many probably didn’t pick up on it but those that did knew whom he meant. Maybe the music over the rants has a buffering purpose but regardless the stage was soon packed with stacks of kids. The ‘suicidal’ chorus of ‘Pledge Your Allegiance’ was repeatedly yelled before the outro of intense drumming and multi-finger tapping guitar shredding. Then it was over.

The stage lights were up and crowd spewed out of the venue knowing they’d seen an uncompromising band with a legendary front man still full of piss and vinegar. It looks like ST have found a way to smile today, confident in delivering a punishing set. Even if we’re not tripping to the brain anymore, tempers were frayed and all band members were flagrantly sporting their own band merchandise, ST really did deliver a chaotic and entertaining show.