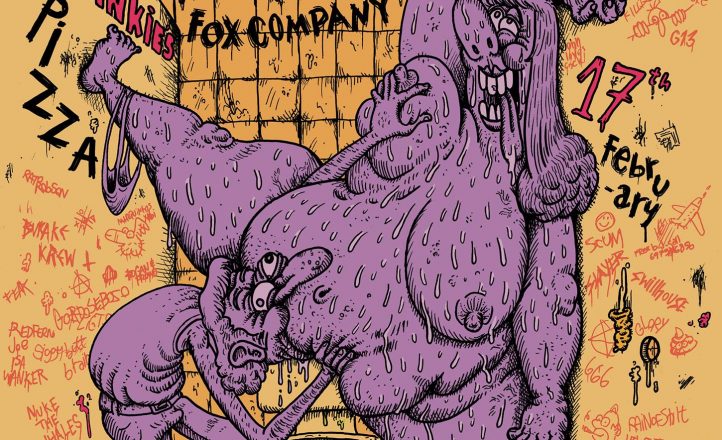 Tonight was the final night of the Supersuckers’ latest Australian tour and there is no more appropriate setting in Sydney for a night of searing cowpunk rock and roll than an underground pizza bar.

There’s always a decent crowd at Frankie’s, even on a Sunday night, and opening act Fox Company got the audience rocking nicely. Young and enthusiastic, they were fired up from a show in Brisbane the night before and delivered a solid set of short and punchy, upbeat rock songs. It was a good start to the evening from a tight and well-rehearsed band.

Next to the stage were Eightball Junkies, a band that, in contrast to Fox Company, haven’t always enjoyed the reputation of being tight or that well-rehearsed. Those days seem to be over, however, because lately this band has been really together and tonight they were in great form. Bare-chested frontman Will Vaughan climbed around the venue, dangling from the light rig and spraying beer over himself and the crowd as the band ripped through a set of high-energy sleaze-ridden rock and roll.

Rock and roll is the very essence of cult Seattle survivors Supersuckers, closing out the Aussie leg of their 30th anniversary tour in front of a room well warmed up by a strong undercard. With Van Halen’s “Eruption” serving as an intro, they tore into it from the moment the curtain opened, a speedball garage rock cowpunk power trio who play like they’ve seen and done it all – probably because they have. In cowboy hat and shades, Eddie Spaghetti belts out the tunes and offbeat observations of three decades on the road as his denim clad partners Metal Matt Chandler and Captain Chris Streicher help him deliver the goods – a few warm-up tunes like “Break My Balls” and “Dead Inside” before firing up the entirety of 1998’s ass-kicking classic The Evils of Rock N Roll for the evening’s delectation. It was a pure rock n’ roll lovers delight from a band that wouldn’t have it any other way, unless it was a little countrified. A staunch way to wrap up a tour and another sterling night of rock at Frankie’s.