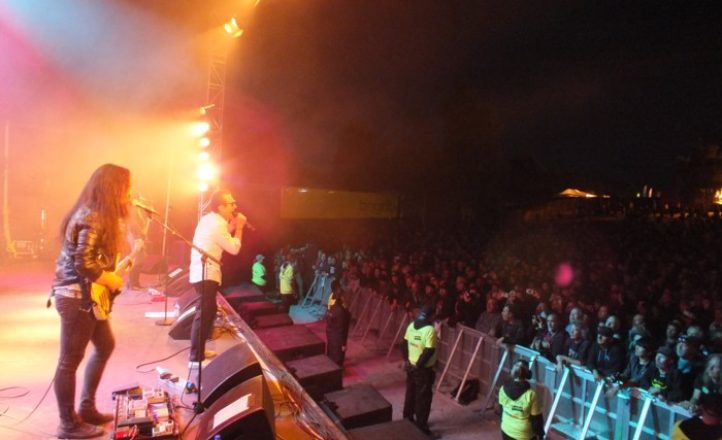 For metal fans the world over the act of partaking in the journey to a European metal festival has long been seen as an act of pilgrimage, a rite of passage and our equivalent to a trip to Mecca. It doesn’t particularly matter which road you take to which festival on this massive, culturally diverse and historically rich continent, you are in for one hell of an adventure. It is a gargantuan undertaking both in terms of financial commitment and in the traveling time and energy required to make such a journey but one well worth the cost on all fronts as it can be a profoundly fulfilling adventure that potentially rewards in many worldly ways. You go for the music and additionally you get to see a huge chunk of culture and history.

Amongst its many incredible sights and historical, cultural overload there is something profoundly metallic coursing through the collective vein of Europe in the summer months that gives it the feeling of a metalheads wonderland. Must-see gigs everywhere, hirsute black clad brethren stroll languidly down ancient cobblestone streets and alleyways, ancient architecture and the ghosts of history abound around every corner. We traverse from our Antipodean safe harbours to the hoary wilds of a beer-soaked field in some far flung land where the equivalent of modern day Vikings run rampant on their conquests, laying waste to all before them, leading not with long boat and broadsword but with drums and guitars, metaphorically ‘raping the women and wasting the men’ but no one is running to any goddamn hills, they are of course descending from countries from the furthest regions of the globe to congregate in reverence to a music and lifestyle that is so much more than any trending sound byte or unit shifting, brand endorsed, fashion plate contender, pseudo celeb. This is the celebration of a truly international metal nation, a tribal gathering of goodwill and common cause that defies language, borders, age or social standing.

Religious zealots may have their wailing walls and effigies to which they bow down and pay homage to their other worldly idols, we have our walls of wailing amps and speakers to which we bow and bang to our towering musical idols and preening performers.

Now all of this is purely subjective, others may very possibly have an entirely different experience but let’s not let a lack of imagination get in the way of a good story. This is the journey of a card-carrying, lifelong, lost-to-the-cause metalhead on another European odyssey.

Among the selection of these many musical celebrations there are figurehead festivals such as Hell Fest in France or Wacken Open Air, held each August in Germany, that hold a high level of awareness with punters and rightly so as they are great examples of the ethos and flat out fuckin’ fun that is on offer at these events and they certainly represent the incredible strength that exists within the metal community but there are literally dozens upon dozens of like minded events on the European summer calendar for you to choose from depending on which lineup or country destinations you prefer. Our undertaking this year is to Sweden Rock Festival in Solvesborg, southern Sweden.

With all of this ringing in my head and beating in my chest I enter the festival grounds at the start of Day 1 to be faced with the familiar sights, sounds and smells that are there to greet you upon arrival at such a festival site. People are arriving in their droves, setting up camp, if the surrounding fields are to be their bed and abode for the coming onslaught. Friendships that will endure far beyond the parameters of this four day joyride are being forged and a simmering sense of excitement and anticipation hangs heavy in the air. In a fine piece of planning on the part of the organising team, on Day 1 the bands start late in the afternoon allowing punters to get in, get set up, get friendly with the natives, visit some of the vast array of metal market stalls on offer and get the early beers in. The usual uniform sea of black is the order of the day but the Swedes have a great ability to inject fun and humour into most situations and amongst the black brigade there is a jocularity on display that sees many dressed to impress in a style that leaves mid 80s Sunset Strip glam for dead. A real carnival vibe pervades the festival site and surrounding fields as they become crammed to the gills with tents and mobile holiday homes, makeshift villages appear and more flags than the United Nations billow in the warm afternoon breeze.

Having settled into the rather comfortable and ideal, feast of friends, accommodation set up myself and my local cohorts have secured for the duration, we greet, catch up on our recent mutual life and rock n roll stories and move forward with our priorities for the weekend. BBQ and a couple of brews under the belt, we plan the must see acts for the proceedings. As well planned as this event is, it’s not always possible to see every single set in its entirety by every band you want to so plan of attack and pecking order are essential for maximising the aural feast on display over the coming days.

For this reason, to maintain your correspondent’s relative sanity and to ensure the whole purpose of this adventure is not lost and a high level of enjoyment is maintained throughout, this will perhaps not be the most overtly analytical, song by song type of review, more an overview of proceedings intended to give you, the reader, some level of appreciation of the general feel of the event as well as the sets played. Priorities voiced, plans laid we head out to catch the first course of the musical banquet that is to be served up over the coming days.

Long considered one of the forefathers of the modern metal movement, having had their pensions secured by platitudes and copycat cover tributes by the likes of Metallica and Megadeth, it’s an absolute fucking pleasure to finally get to see Diamond Head. Having been a part of the nation that was struck by their lightning over 30 years ago, I have waited a long time to be in the presence of Tatler and Co and although Brian is the sole remaining original member their passion and delivery remains undiminished, the audience is pumped and the atmosphere, well, it’s electric! Not surprising when you consider the material and when you can reach back into a rich back catalogue and pull out tracks like ‘In The Heat of the Night‘, ‘Lightning to the Nations’ and ‘It’s Electric’ you have all the makings of a blinding set. Newer tracks such as ‘To Heaven from Hell’ connect well with the assembled hordes and give the new guys their chance to shine and when you round out your set with an ending salvo that includes ‘Am I Evil’ in its canon, you know you’re on a winner. Killer set and a great kick off to proceedings.

Next up on my pecking order for the weekend is another lifelong favourite, Graham Bonnet and band. If this journey were to be an exercise motivated purely by maniacal box ticking we would be off to a mighty fine start. Bonnet has had an outstanding 40+ year career that has seen him reach great heights with some of the hard rock/metal scene’s brightest luminaries.

Having had the uncanny knack of putting himself in esteemed working environs with a selection of the greatest guitar players to have ever graced a plectrum and fretboard, he has contributed to a brace of releases that have to feature high in the must have collections of any self respecting fan of the foundations of the hard rock movement. He has led bands with and worked alongside Ritchie Blackmore, Michael Schenker, Yngwie Malmsteen, Steve Vai and Chris Impellitteri to name but a few and maintains a contemporary relevance with a super proficient current lineup of his own band and comes packing a career spanning set list that is the stuff of true legend. All the key tracks a festival length set will allow are aired and Graham hits the stage with an excited energy that belies his tenure and alludes to the stature of the event and his ongoing enthusiasm for performing what is undeniably a set dominated by stone cold classics.

Kicking off with the Rainbow one, two of ‘Eyes of the World‘ and ‘All Night Long’ hooks the crowd in instantly and with the set concentrating mainly on his punchier songs via some solo material and tracks from the Alcatrazz period of his career. A well balanced set hits more highlights with the airing of three tracks from the superb Assault Attack album from his MSG stint and closes out with two more crowd pleasers in ‘Since You’ve Been Gone‘ and ‘Lost in Hollywood’ Great stuff. An early highlight to a fixture that will see Graham return to the stage a few nights later to add some sparkle to Michael Schenker’s career-spanning, festival closing set.

Rounding out the first evening’s performances is an impressive, mechanically proficient set by German power metal kings Blind Guardian, not an act I have actively pursued seeing previously but they impress with musical dexterity and a passion that obviously has a sizable audience in this part of the world. They clearly are among very vocal friends as they blaze on past the witching hour to a broad crowd of willing midnight manics. Tracks like ‘Nightfall’ ‘Valhalla’ and ‘Twilight of the Gods’offer a window into why this band are so highly regarded and why Euro power metal is such a force on the current scene.

This set gives a very real indication of the stunning quality of the production values on display at this and most other modern music festivals, double kick and bottom end rumble the earth, guitars cut the cool night air and full spectrum piercing lights drill to the very back of your brain. Superbly solid stuff and a fitting end to an evening spent kicking up dust in a Swedish field full of happy, friendly, lubed lunatics.
The evening provides a reminder that you are physically unable to sometimes see every set you’d like in full and means that your wordy hack will only get to see snippets of some sets, a theme that if we’re not careful will mean missing some choice tunes and necessitates I will be clocking up a few kays dashing from stage to stage over the coming days.