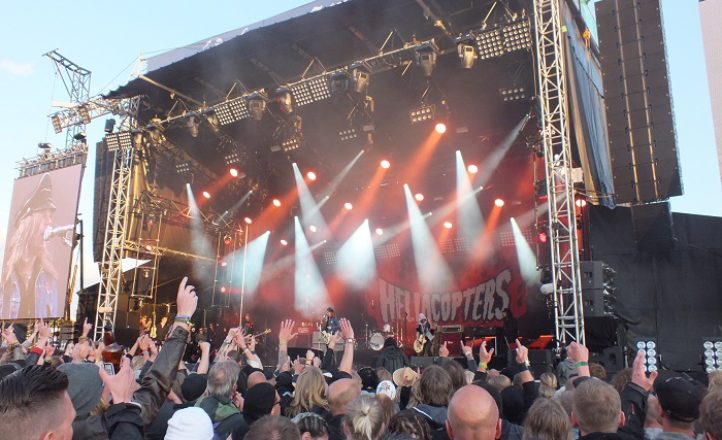 Loudness are one of very few Japanese heavy rock bands to have made any kind of impact on a world scale. Their catchy hard rock with stellar guitar histrionics has struck a solid cord with a broad audience and their 30+ year career is highly regarded amongst the metal cognoscenti as evidenced by a healthy turnout at their lunchtime set on the Sweden stage. With a heavy leaning on the fantastic Thunder in the East album the set kicks off with ‘Crazy Nights’ and ‘Like Hell’ and guitarist Akira has incredible tune and is truly on fire. New tracks are played and go down well but it’s the late 80’s heyday that people have turned up for and they come back with ‘Heavy Chains’ and ‘Shadows of War’ and provide an awesome start to day 3. Long time coming and very well received.

A quick sprint to the Rock stage (renamed for this year as the Lemmy stage in reverence to the Motorhead icon) allows us to trip out for a little while with some heavy Hawkwind trancey space rock. ‘Silver Machine’ and others send out hypnotic waves that sway the early crowd.

Former Deep Purple singer Glenn Hughes is undoubtedly one of the greatest hard rock vocalists of all time. Through his work with Purple and enumerable solo highlights including working with Tony Iommi, Black Country Communion, Pat Thrall, Phenomenon and others he has more than established himself as one of the greatest soul/ rock singers of our or any time and seeing him at any time only underlines this fact. Today he is in confident form, singing like a dream and in full command of his incredible skills as are his band including shit hot guitar player Soren Anderson. A setlist that kicks off with ‘Stormbringer’, snakes into ‘Medusa’ via ‘Muscle and Blood’, ‘One Last Soul’ and others then brings it home with ‘Sail Away’, ‘Mistreated’ & ‘Burn’ is nothing short of exhilarating.

Lita Ford has had a somewhat checkered history with performances at Sweden Rock, a previous appearance was widely derided and she is here to make amends. Kicking off with one of her career best tracks ‘Gotta Let Go’ and a well suited cover of Elton’s ‘The Bitch Is Back’ puts all on notice she means business and who would’ve thought 58 could look so good. Siren song ‘Kiss Me Deadly’, Runaways hit ‘Cherry Bomb’, ‘Close My Eyes Forever’ and another cover in Sex Pistols ‘Black Leather’ go down well and after a pretty decent set she can walk away head held high.

Uncle Acid and the Deadbeats play a great set of stoner/doom metal. Heavy, groovy, jammed out and showing a very real connection to a time when Blue Cheer ruled and Sabbath were still getting started. ‘Death’s Door’ and ‘Waiting For Blood’ are huge and if you aren’t onto these guys already check them out.

The Temperance Movement play roots rock, coming off kinda like a catchy Black Crowes. Their organic groove is a perfect opportunity to pull up in the sun on a grassy knoll, pour a long cold one and get ya toe tapping freak on. Refreshing!

Foreigner have had what seems like a number of careers, from 70s stadium rock heroes, to 80s production-obsessed ballad kings, to their current incarnation as guilty pleasure big stage crowd pleasers. Current frontman Kelly Hansen has a lot to do with their rejuvenation as he does his best jukebox hero impression and drives the band to nail their heavy hitters into the audience. ‘Double Vision’, ‘Head Games’, ‘Cold As Ice’, ‘Dirty White Boy’, ‘Urgent’ & ‘Hot Blooded’ all connect well with the celebrations of the heaving early evening crowd. There is certainly a place for such acts at the premier metal/rock crossover festival events and they prove to be a big hit with the broad demographic assembled today.

A dash to the Rockklassikier tent allows a blast of the traditional metal with a pinch of folk stylings of Slough Feg. The tent is packed and these guys obviously have a broader appeal than expected. ‘Marauder’, ‘Warriors Dawn’ and ‘The Wickerman’ are all welcomed heartily and this is a good set from a band finally getting their just deserts.

As one of Sweden’s national treasures the reunion of The Hellacopters is big news in this part of the world and rightly so. Their brand of catchy heads down rock and roll is no nonsense and it’s entirely appropriate that they be playing the Lemmy tribute stage for this one off reunited performance, they do indeed play rock and roll! The focus for this performance is the 20th anniversary of the Supershitty to the Max album and as ‘(Gotta get me some action) Now!’, ‘ Fire, Fire, Fire ‘ and ‘Fake Baby ‘ flash by there is a real hope that they will choose to do a similar thing as subsequent albums come up for similar milestones.

A swing by the Sweden stage allows a blast of Gamma Ray. ‘Heaven Can Wait’ and the crowd participation of Helloween favourite ‘I Want Out’ give us a quick fix of shreddy trad metal before it’s off to the big game on the main stage.

Twisted Sister are calling time on their career, one last run around for old times sake they say, but as we all know these days farewell tours can go as long as some bands entire careers. On the strength of tonight’s performance this is one farewell that could run as long as it damn well likes. 30 years on from their chart bothering heyday these guys are hitting it harder than one might expect. Having long since ditched the ridiculous costumes that saw beefy neanderthals appearing on stage looking like cast offs from a transvestite horror movie audition, they have gone for a lean and mean approach and with a set list that favours their heavier more credible tracks with the crowd pleasing, inevitable hits thrown in this is a high energy and thoroughly enjoyable set. Dee Snider looks ridiculously fit for his 61 years and his pipes and banter are in fine form, add to this Mike Portnoy behind the tubs and their effective twin guitar attack and this proves to be rollicking good fun. ‘Burn In Hell’, ‘Destroyer’, ‘Like A Knife In The Back’, ‘You Can’t Stop R’n’R’ and ‘Under The Blade’ flash by to great effect, ‘I Wanna Rock’ & ‘We’re Not Gonna Take It’ create delirium among the masses, a great cover of ‘It’s Only R’n’R(but I like it)’ and rounding out with ‘Tear It Loose’ and ‘S.M.F’ brings this headline set to a very agreeable end. Great stuff.

Avantasia aren’t a band I’ve looked into that much. Being a symphonic power metal, rock opera I find their material can at times be a little overwrought and melodramatic for my liking, it is however always well played and incredibly popular in this part of the world, so the least I can do is check them out. I’m glad I did as in the live realm on a balmy night in Sweden this stuff works and the lineup of talent on display is impressive. Kicking off with tracks from their current Ghostlights album it’s not long before main man Tobias Sammet starts wheeling out the big guns he’s brought along for the party. Former Helloween singer Michael Kiske, Magnum’s Bob Catley, Jorn Lande and Mr Big’s Eric Martin all get up for at least a couple of numbers and as songs like ‘The Scarecrow’, ‘Dying For An Angel’ and ‘Lost In Space’ fly by the drama all seems rather appropriate and quite an enjoyable way to round off a stellar day.