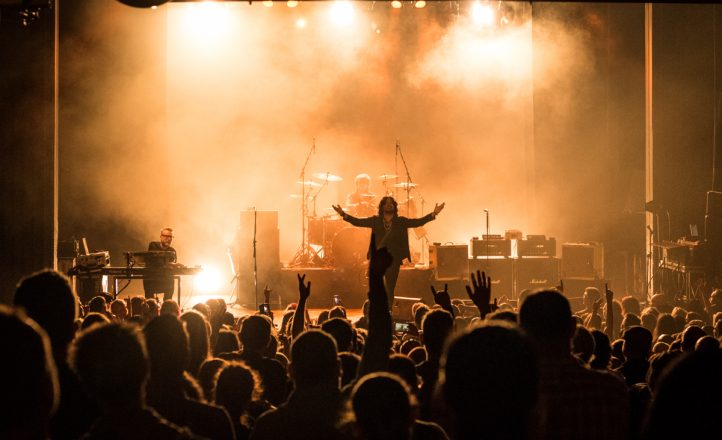 Much as they did during their first incarnation,, The Tea Party have made Australia their second home, and this marks the band’s fifth full tour of the country since they reconvened in 2012.

Tonight was the final show on their 20 Years of Transmission tour, recreating their 1997 album live in front of a solid crowd at the Enmore in Sydney. The last time they presented an album in full they came on late and almost fell foul of the venue’s curfew; this time The Tea Party began a full ten minutes early, reordering the album’s track listing by opening with ‘Army Ants’ and following that with ‘Babylon’ before taking the first walk down the left-hand path with ‘Psychopomp’, a song driven by Stuart Chatwood’s jarring keyboard motif. ‘Gyroscope’ offers some relief as the band go in a real rock and roll direction, if ever so briefly, before swerving back into the existentialist darkness that is the bulk of Transmission. Between songs, Jeff Martin takes the time to talk us through it, but it is a dark journey nonetheless. ‘Release,’ however – prefaced by a damnation of the ‘Satanic orange chipmunk’ and a dedication to the women in the crowd – soars with the added beauty of almost the whole room singing in unison and Martin devotes the haunting ‘Aftermath’ to the memory of Bowie. Then we finally get to hear ‘Temptation’ almost take the room off the place as The Tea Party bring the first part of their performance to a resounding close.

The second half of the program is the trio experimenting with the rest of their catalogue, turning songs into extended jams that weave through sections of other tracks by other artists: ‘The River’ turns into ‘Dazed and Confused’ and also invokes Tool, ‘Heaven Coming Down’ veers into a four-minute crowd singalong of ‘With or Without You’. ‘The Ocean at the End’ is dominated by Martin’s epic soloing and the violin bow makes its appearance during ‘Save Me’ with the usually statesman-like Chatwood leaping from the drum riser. A second encore opens with Martin taking to the stage alone for ‘Winter Solstice’ ahead of the epic jam that ‘Sister Awake’ becomes, breaking into ‘Paint it, Black’ and then turning into “Heroes”, lifting the evening even higher than the pinnacle to which it has already risen. There’s something in the air tonight that has made The Tea Party spectacular, delivering the best performance since that first reunion tour. With shows as awe-inspiring as this, their continued popularity should be no mystery.