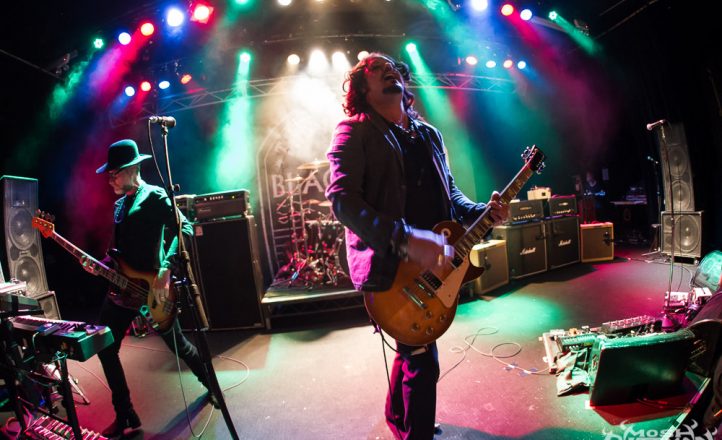 As Australians, we need to ask ourselves what it is that keeps us coming back to The Tea Party. What is it about this mystical Canadian trio that makes us flock to their tour dates in sell out numbers every headlining tour? Is it the evidently deep talent of its members, the powerfully charismatic aura of their frontman and simply the mesmerising draw of the band’s dark, Baroque rock music? Whatever the case, four nights in to their sixth Australian tour in seven years and The Metro was bearing witness to another solidly-attended evening with The Tea Party – on a Sunday night, no less.

Warming up the crowd for the main event was Blue Mountains prog trio Red Bee. Their normally hyperactive stage presence hemmed in by the restrictions of the other band’s gear taking up most of the room, they nonetheless went to work. The effervescent Dan Silk cajoled the crowd at every opportunity as the led the band through a barnstorming set of djenty metallic time-signature defying tunes. Thick with catchy riffs played out long enough for the audience to rock out to, Red Bee combine metal, rock and prog into a hook-ridden, cohesive and enjoyable singularity, and tonight they were on fire.

It’s been twenty years since The Tea Party has played shows in the intimate surroundings of The Metro, and yet they seemed right at home as they took up their positions and and entered ‘The River’, setting the audience up for two hours of dark, mystical rock and roll. The Tea Party’s muse is indeed a dark one, but the band revel in their art. Songs become sprawling jams that turn into expansive medleys or break out into extended instrumental breaks that take their tunes well beyond the studio versions. After half an hour, the band has only played three songs; when Jeff Martin requests the crowd put away their phones in his warm, commanding baritone, seemingly everyone complies and The Tea Party introduce a new song, ‘Way Way Down’ before Martin takes a sober moment to appeal for peace as he reflects on hate-fuelled murder rampages in Canada and New Zealand ahead of ‘Release’ with the entire room singing the chorus for him.

Cheers go up for ‘Save Me’ with its violin-bowed guitar solo and segue into Buckley’s ‘Last Goodbye’, and a similar reception meets ‘Heaven Coming Down’ as it weaves into ‘With or Without You’. Martin’s solo in ‘The Ocean at the End’ is nothing short of epic, latest single ‘Black River’ is welcomed enthusiastically and during ‘Temptation’ a lone stage diver launches himself into the crowd, directly at a group of ladies who deftly step aside as a single unit, introducing him to the floor.

“What year is it?” Martin asks with a wry grin in the aftermath, wagging his finger – “That was good! But don’t do it again.”

Finally, a mega-jam built out of The Edges of Twilight‘s majestic ‘Sister Awake’ wends its way through a percussive interlude and snippets of Bowie and the Stones, Stuart Chatwood guiding it with the ethereal sound of his harmonium. Once again, The Tea Party have cast their spell, and Sydney has been left in the warmth of its allure.

The River/Sober
The Bazaar
Psychopomps
In My Time of Dying/Way Way Down
Release
The Halcyon Days
Save Me/Last Goodbye
Heaven Coming Down/With or Without You
The Ocean at the End
Black River
Temptation
—
Sister Awake/Paint it, Black/”Heroes”