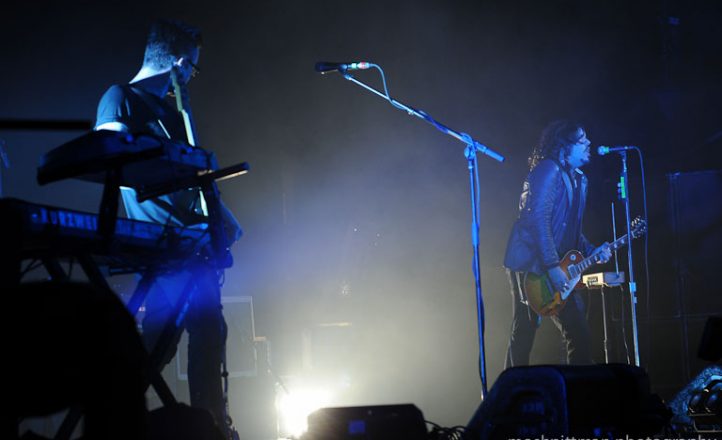 The Tea Party struck a particularly resonant chord with Australian rock audiences during the 1990s, proving themselves to be phenomonally popular with both genders and managing to string together tours here that sometimes lasted for months. Unlike, say, Bon Jovi, they were a rock band that women liked and guys weren’t embarassed to admit they liked. Unlike Metallica, girls would gladly go see them alongside their men. Because they wrote songs that were sensual without being cheesy, dark without being menacing and heavy without being violent. There was bombast, but also control, and they were led by the enigmatic Jeff Martin, almost the perfect rock star figure who unlike, say Jon Bon Jovi, was rugged and manly enough for the guys to want to be him, yet still handsome enough for the girls to want to do him. It’s been eight years since The Tea Party last mesmerised Australian audiences, long enough for memories of songs and performances to have faded and made way for new favourites, but anyone cynical enough to believe this was merely another 90s band making a comeback is underestimating the allure of this Canadian trio.

As the lights dimmed inside the Hordern Pavilion, a low roar went up from the near-capacity crowd, still young enough to rock out but perhaps older and more mature than the one who, at this reviewer’s first Tea Party show (at the Metro, 1995) still had the temerity to mosh and crowd-surf as if they were watching a metal band. Then the stage lights went up and there they were, the leather-clad Les Paul wielding form of Jeff Martin once again alongside the somewhat Adam Clayton-ish figure of Stuart Chatwood, Jeff Burrows already at work behind a massive kit as the band swung straight into the mystical tones of “The River”. Always a jam band at heart, it wasn’t long before snippets of other things appeared woven into their material, with Martin adding a chorus of Tool’s “Sober” into the last part of the song, so neatly a lot of people seemed to miss it. Tradition dictated that “The Bazaar” would be next, and so it was, though given a looser, more rambling reading in the live context. Whatever The Tea Party’s strengths were as a recording band, on stage was where they truly shone and just two songs into their set – being recorded for a DVD release – there was every sign that the magic was more than intact.

After “Correspondences”, Martin was left alone on stage to perform Jeff Buckley’s “Last Goodbye” and owning it so effectively that no one will be able to cover this song ever again, a stunning tribute from one master of dark seduction to another. By now, as the band then set off into “The Messenger”, the crowd had split into those to whom The Tea Party had been a major soundtrack to their 90s existence, and those who heard “Fire in the Head” on the radio once. Those people got their wish when it was soon rolled out with all its dark majesty, almost an hour into the performance

With Stuart Chatwood playing John Paul Jones to Martin’s Jimmy Page and taking up keys and harmonium as the set moved into acoustic mode, the periphery of the Hordern crowd kept chatting about their afternoons despite the singer’s request to keep it down. Everyone else was enraptured by “The Badger” and amused by Martin’s rambling anecdote about the mushroom-induced inspiration for “Shadows on the Mountainside”. It was only a matter of time before The Tea Party went back into jam mode and what better way to do so than by way of a long meander through Zeppelin’s “Nobody’s Fault But Mine” in the tail of “Sun Going Down”. Those only there for the hits had probably long since departed, but as the evening reached its pinnacle it was clear the band was only just gaining momentum – Martin took a bow to his guitar during the glorious “Save Me” that enfolded the crowd like the arms of a lover, a warm, extended embrace that wove its way through “Kashmir” and back in the longest jam of the night to that point. The gorgeous “Release” offered another transcendent moment and “Temptation” closed the main set with Martin conducting the crowd into a mass sing-along.

Whatever personal issues the trio have had to scale to get them to this point seem now to be a long way to resolution with an affirmation during the show that “The Tea Party is back for good” and a promise of new material next year. Even without that, the chemistry was palpable with Jeff Burrows coming to the fore of the stage, revving the crowd with hand claps and running mock-interference with Martin as he veered into a solo, and the normally reserved Chatwood actually broke into smiles now and then, along with adding a hearty backing vocal to “Fire in the Head” early on. “Winter Solstice” heralded an encore that soon took on epic proportions as the band leaned into another extended jam through “Sister Awake” that touched on the Stones’ “Paint it, Black” and even after two and a half hours it seemed like The Tea Party was still striving to push themselves to new heights of brilliance. Sadly, it couldn’t go on forever and at last the three gave a final bow, leaving Sydney still catching its breath. There was at least a dozen songs this band could have played as well, or instead, and many would still have been left wanting more, but few could disagree that they had just been witness to something amazing.