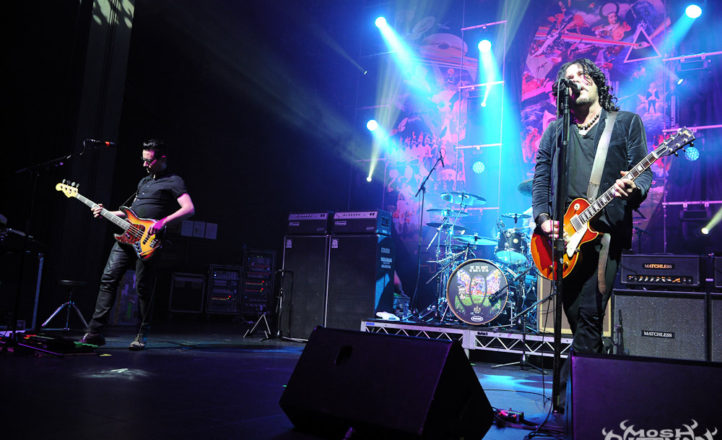 The Tea Party never do anything by halves. Their latest album, The Ocean at the End is an example of restrained bombast and emotive musical explorations passionately played but with a matured approach. Live, they have improved again, still tampering with exotic instruments amongst the rock power but all done within the context of what the song demands. But before they hit the stage, a time warp of sorts went into play as Adelaide rock band The Superjesus took up the support role, cranking out tunes recalling the golden era of Homebake and the Big Day Out festivals where the afternoon was a steady line up of reliable Australian bands. No one minded either.

The audience warmed to The Superjesus quickly even if some were not aware that guitar playing vocalist Sarah McLeod had recently toured with The Tea Party’s mastermind front man Jeff Martin. As a result, she appeared comfortable despite her impressive, tight fitting leather suit that would make Suzi Quatro or Joan Jett envious. Opening with the punchy ‘Now & Then’, Sarah sported a fabulous Gibson Explorer guitar whilst lead guitarist Tin Henwood added solid guitar work on a sunburst Gibson Les Paul. Switching guitars, the riffs continued to roll out with the odd bit of amiable between-song banter and a good use of pacing with song variety. Bassist Stuart Rudd and Paul Berryman then locked in to introduce ‘Saturation’ which kicked in with a catchy chorus.

In other words, this was a rock show. Sarah’s stage presence is undeniable and it feels like they’ve managed to pick up from where they left off years ago. Hearing songs like ‘Secret Agent Man’, ‘Second Sun’ and ‘Gravity’ again live reminded the crowd how strong their songs were and that they deserved the commercial success at the time. Their early EP song ‘Shut My Eyes’ still delivers too. There is something about seeing a seasoned band in the support slot that warms up the crowd brilliantly. Superjesus did just that, closing their forty minute set with the straight groove of ‘Down Again’.

The stage set opened up, better illuminating the latest nautically themed Tea Party album backdrop artwork. The drum riser sat centre stage with stage left containing an array of guitar amplifiers. Setting the mood with some Moroccan grooves over the PA before the three piece wandered on to great applause, they launched into the Zeppelin feel of ‘The L.O.C’ from The Ocean at the End. Jeff Martin has a warm voice that fills the venue, complemented well by his confidently sustained guitar playing on richly toned Les Pauls and Telecasters.From the start of the show, his leadership of the band was evident as drummer Jeff Burrows and bassist Stuart Chatwood kept things moving along, adding their own flashes of musicianship without distracting from the song delivery. The evocative, poetic ‘The Bazaar’ followed, allowing a loud crowd chorus sing-along before another new track was presented in the hypnotically dark, low end rumbling of ‘The Black Sea’, complete with some lighter guitar sounds within.

Delving into the back catalogue, the gentle but dense sonics of both ‘Psychopomp’ from Transmission and the powering ‘Fire in the Head’ from The Edges of Twilight had Martin in complete control of the audience and also offering some background information between songs. Whilst the ominous ‘Lullaby’ had Martin indulging in some Theremin magic before a new track, ‘Water’s on Fire’ utilised an acoustic guitar, he eventually had the usual quiet song chatter stopped by leading a chorus sing-along with only the kick drum backing it before returning flawlessly to the full rock sound. More new material was delivered but not before Martin perched on a stool with an esraj on his lap, coaxing long, haunting notes with a bow to usher in ‘Save Me’ in rock mode as his guitar tech ensured instrument changes flowed. The sonic indulgence peaked with Martin tipping the proverbial hat to Jimmy Page with an aggressive violin bow solo run across his guitar accompanied by floor tom rolls. It segued into a cover of ‘The Maker’ before reprising ‘Save Me’.

It was all done with such conviction that any perception of self indulgence was let through. Similarly, the performance of the title track revealed Martin’s evolving song writing skills, slowly building to a blues rock guitar solo that showed his mastery of guitar. Simply stunningly executed, the main set was closed off with the sensually writhing groove of ‘Temptation’ from Transmission with the album’s title track itself embedded within it, throwing in some dumbek for added percussion and a suitably bombastic ending. Naturally, the encore continued the concept of mixing songs into each other. A couple of tracks from The Edges of Twilight were thus delivered that way, the first being ‘Turn the Lamp Down Low’, introduced by some dirty slide guitar and referencing Led Zeppelin’s ‘In My Time of Dying’ and book-ended with the gritty swagger of ‘The Cass Corridor’ from the new album. The classic ‘Sister Awake’, with rich twelve string acoustic guitar tones brought Chatwood’s harmonium out in the live mix amongst further percussion before the full rock band mode kicked in. ‘Have you ever wandered what absolute power would sound like?’ Martin quipped. ‘It sounds like this’ — then proceeded to hammer into the riffs before the Eastern-tinged song kicked back in and soon flowed neatly into the initially keyboard- and wah-guitar drenched riff driven song ‘Pulse’. Easing right back into ‘Sister Awake’, the massive sound of The Tea Party at full volume really was something to behold. For a set that went for a hundred minutes, The Tea Party still have immense talent and showmanship. It might well be one of the best gigs of the year for any hard rock music fan.

The L.O.C
The Grand Bazaar
The Black Sea
Psychopomp
Fire in the Head
Lullaby
Water’s on Fire
Save Me / The Maker
The Ocean at the End / Emerald
Temptation / Transmission
—
Turn the Lamp Down Low / The Cass Corridor
Sister Awake / Pulse