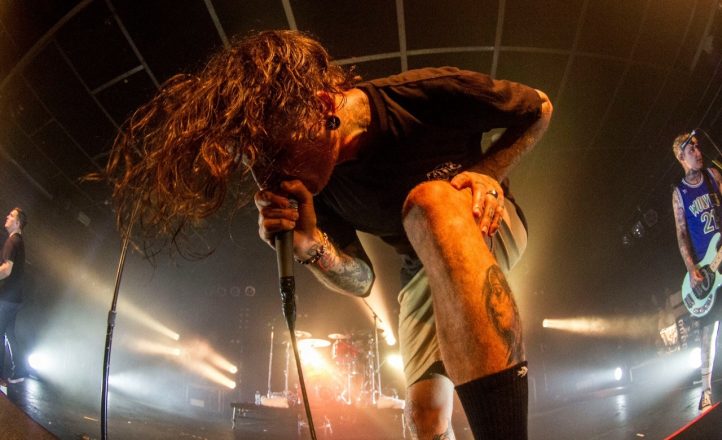 If lining up with a thousand other punters snaking your way through a car park on a summer afternoon is your idea of fun, all while cold beer and a waterfall (this venue has a waterfall!) is only metres away, then perhaps you need to reevaluate your life choices.

Needless to say, the only way to get inside Waves, Wollongong on time was this. First up were Byron Bays PLTS, who opened with some rolling, beach vibe rock. Weaving cruisy riffing with post-rock twinges and melodic verging on heavy vocals, the four piece had a few heads nodding in appreciation.

The crowd had well and truly packed in for Triple J favourites Ocean Grove. Touring their soon to be released debut The Rhapsody Tapes the Melbourne five piece had the first of many circles pits doing laps. Bassist Dale Tanner in his bright green jacket, hair and sunnies moved like Peter Garrett, twisting and turning. “These Boys Start Fires” and fave “Intimate Alien” had the room dripping with sweat.

Sydney’s Hellions have gathered a huge following since releasing their ARIA nominated album Opera Oblivia. Bursting out of the gate with “Quality Of Life”, they didn’t let up, the crowd a screaming, jumping and sweating mess. They were joined on stage by John Floreani of Trophy Eyes who belted out some vocals on “Lotus Eaters” as he bouncd his way across the stage. Closing the way too short set with “24” and the Hottest 100 absent “Thresher”, this is a band who’ve perfected their style.

Despite the ridiculous heat, the sweat dripping off walls and bodies, the room was completely sold out for metalcore titans The Amity Affliction. Opening with “I Bring The Weather With Me”, the crowd were heaving right off the bat. “Open Letter” and “Never Alone” had frontman Joel Birch grinning as security were kept busy catching bodies, a hard thing to do when those bodies are slippery and shirtless.

The smoke and lights spread across the room, glistening off the writhing mass in the mosh. “I Hate Hartley/Youngbloods” melded together, whilst their slowest track to date “All Fucked Up” had the crowd singing as one. Closing the main part of the set with “Shine On” and “Fight My Regret”, Ahren Stringer bouncing all over the stage, phone lights held high and still the sweat rained down. Several seconds later and the quartet are back on stage for one last crack with “Pittsburgh”, “Don’t Lean On Me” and title track and Triple J favourite “This Could Be Heartbreak” as frontman Birch stood centre stage, arms wide, the 1000-strong audience chorused as one and bodies streamed over the barrier of the stinking hot and sweaty room.