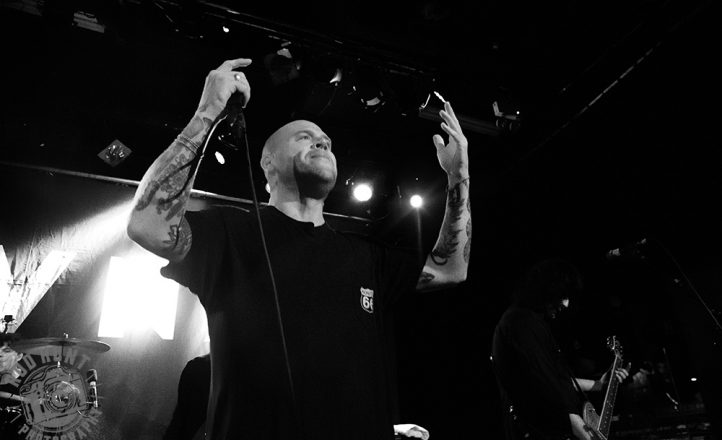 A crowd of band shirts, beards and beers filed into The Metro, keen for a night of rollicking punk rock with regular visitors The Bronx.

High Tension were on warm up duties. They hit the stage to face a semi-empty pit, but it didn’t take long for punters to get drawn in, up close and personal with the Melbourne four piece. Front woman Karina Utomo had an incredible stage presence, and an outfit to match. Lauren Hammel was flawless on the drums; powerful, but oh so smooth. Utomo got into the crowd mid set and sang amongst the mosh, a circle pit opening up around her. After an intense set which included new material from new LP ‘Purge’, energy levels were up – “Well done; that was a good effort. Now you’re ready for The Bronx.”

And we were! There was a buzz in the air, cans were being crushed, and the venue was now pretty packed. The stage manager blinked his torch and an immense cheer followed. There’s a lot of love for these Californians. It was announced that there was “No rules tonight, no rules tonight Sydney!”. Bring. It. On.

Being a diehard Queens of the Stone Age fan, I was particularly excited to witness new Bronx recruit Joey Castillo behind the kit. Joey C was a beast, but it’s hard to concentrate on anyone else when Energizer Bunny front man Matt Caughthran is performing. He just doesn’t stop, and encourages you to keep up all set long. “Let’s go Sydney! Let’s go!”.

The pit obeyed. Circle after jump after stage dive after crowd surf. We frothed to favourites ‘Shitty Future’, ‘Heart Attack American’ and ‘Cobra Lucha’, and to new jams from latest album ‘V’ (or ‘Brvnx’). The punk rock punches just kept on coming.

A fan down the front made an obscure request and pleaded they play it because it was ‘his birthday’. Caughthran responded with “it’s not your birthday, you just want a free dessert” – brilliant – but dedicated ‘White Guilt’ to the (maybe) birthday boy anyway, a track that usually goes out ‘to the ladies’.

After whipping us into a sweaty frenzy for a good hour, the band gave us a brief pause to catch our breath before returning to the stage for a three song encore. Then we collapsed collectively in a grinning, hot, messy heap.