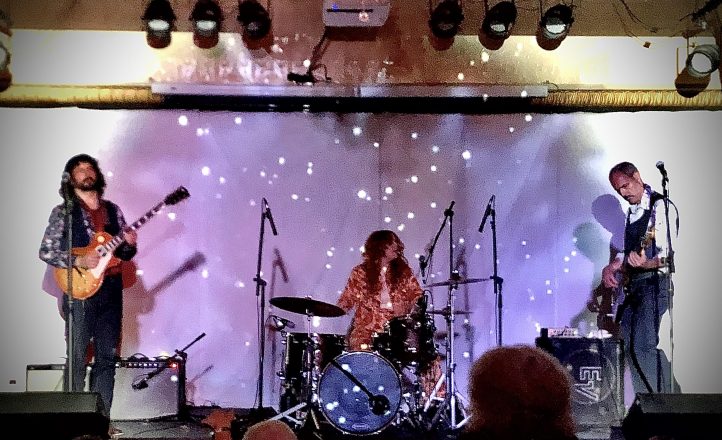 As a classic rock retrospective, serving as a time portal to those who were alive in the 1960s and others who can only imagine, The Cream Experience recently transported the young and the young-at-heart into psychedelic bliss in Katoomba.

With a beloved arsenal of Cream songs in tow, such as White Room, Strange Brew, and their ultimate hit, Sunshine Of Your Love, radical revelry was encouraged in the Baroque Room by the combined power of guitarist-singer Drey Rollan, drummer-singer Lozz Benson (Paul Kelly, John Butler Trio, The Wiggles), and bassist Scott Leishman (Jackie Orszáczky).

Some of the many memorable moments of the band’s performance included an extended jam version of Sweet Wine before Benson’s superb drum solo in Toad, and a rowdy encore on a Muddy Waters song in front of a dancing crowd. The magnificent show was enhanced by plenty of sublime guitar and bass solos, and a masterful grasp over dynamics, tone, and groove. While Cream and The Cream Experience also owe a large debt to early American blues, (which a chunk of their set lists attest to), both bands also have a natural flair for the dramatic, backed by a love for earth-shuddering volume.

The countercultural authenticity of the night was enhanced by the live projection work of Roger Foley Fogg AKA Ellis D. Fogg, described by the National Film and Sound Archive as Australia’s “most innovative lighting designer”. As a former projection artist for hippy rock bands of the Australian 60s, such as Tanam Shud and Tully, Fogg went on to create his lighting magic at the Yellow House Artist Collective in Potts Point, Sydney, which was founded in the early 70s by Martin Sharp.

Known through younger generations by having some of his iconic cartoon work on long time display at Luna Park, Sharp was also a pioneer of the psychedelic arts movement, and created iconic portraits of Bob Dylan and Donovan. He even collaborated with Cream themselves on the album covers of Disraeli Gears and Wheels Of Fire, along with the lyrics for their song, Tales Of Brave Ulysses, inspired by Greek mythology.

The second special guest to appear alongside The Cream Experience was Blue Mountains based author, interviewer, and archivist Lowell Tarling, who, coincidentally, has written two biographies on Martin Sharp. Before The Cream Experience began their second set, Lowell recited one of his poems of self-described ‘dharma bum’ wisdom, which effectively served to remind and encourage us of a semi-nostalgic feeling for radical social change.

Seventeen years after Baker, Bruce, and Clapton played their final rousing chord at the Royal Albert Hall in 2005, The Cream Experience successfully reminded us why the enigmatic trio became so great in the first place.

Cream were more than a band… they were part of a revolution.