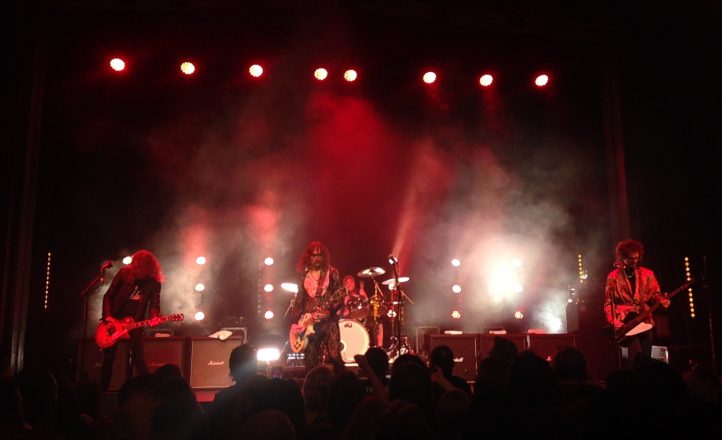 The Darkness have always embraced an absurdist approach to their witty lyrics with a good dash of irony for good measure. Their link to British humour is laced throughout their music that despite having a largely direct, hard rock formula often branches out into eclectic excursions without losing thematic thread of their songs. So with this tour in support of their latest album, Easter Is Cancelled being possibly the last big production to roll through town before international lockdowns on gatherings were in place, an element of dramatic irony was evident in the performance.

To kick things off, Perth based rock act The Southern River Band launched into a fast paced set that combined lewd Aussie larrikinism with unfiltered pub rock and a large serving of self-deprecation. Fronted by energetic vocalist and lead guitarist, Cal Kramer, the band were tightly rehearsed, their material is solid and songs are pretty well crafted.

Running around the stage and regularly leaning backwards whilst letting rip with fluid guitar solos, Kramer was entertaining to watch. Also, the black leather pants, soon-to-be-removed black and white striped shirt and unique mullet coiffure along with early eighties moustache added to the comedy aspect while providing a memorable angle. The quartet won over the crowd within a few songs with plenty of backing vocals, powering
drumming and great blues rock based rhythm figures such as in Let It Ride. Extended solos, borrowing from AC/DC’s oeuvre with some call and response aspects were present as were the odd harmonised guitar line. Much like his obvious influences, Kramer has a deft mastery of country styled rock licks infused into the hard rock guitar parts, adding flavour to tracks like Chasing After Love. To close their set, the grooving boogie of Chimney delivered as promised with a slight funk vibe within the driving rock and walking bassline. As a double time section picked up the pace further, intense drumming and some fiery guitar soloing put the icing on a cracking, seventies rock styled track.

The Darkness ambled on stage, dressed in striking, somewhat formal white apparel with drummer Rufus Tiger Taylor taking his spot behind the kit, as guitarist Dan Hawkins and bassist Frankie Poullain, briefly on keyboards, began the first acoustic strains of Rock and Roll Deserves to Die to commence playing the concept album Easter Is Cancelled in full. Front man and lead guitarist Justin Hawkins joined the band onstage and quickly demonstrated his incredible multi range vocals. Additional mandolin and acoustic guitar filled out the band sound but once the core four-piece kicked into full rock band mode, it was Les Pauls, Thunderbird bass and pounding drums at volume.

The pop-rock of How Can I Lose Your Love saw Justin delivering one of the night’s many whip-fast guitar solos on his white Les Paul guitar between falsetto vocals and encouraging the adoring audience to wave their hands. Meanwhile, Dan and Frankie were locked in, providing full sounding rhythm parts and strong backing vocals from either side of stage. Dan’s guitars seemed to change around at every song and showed off a range of beautifully finished and great sounding guitars. The rhythm guitar sound was warm and filled the venue with sustain whilst Justin’s vocals and solos kept the audience focus as he moved from one side of the stage to other during Live ‘Til I Die.

Heart Explodes offered more rock power, although it was Dan’s turn to offer up a tasteful guitar solo. The song had some brilliantly executed harmony vocals and one of Justin’s many effortless pick-throwing moments, four of which landed in frustratingly, not-quite-close-enough proximity to this reviewer, in the sold out audience. The Queen-inspired Deck Chair saw all band members temporarily trade instruments with Dan on bass, Frankie on acoustic guitar and Rufus on keyboards.

Rock mode of course resumed with the somewhat prophetic title track from Easter Is Cancelled. The song is a lesson in rock dynamics, lurching effortlessly between bombastic heavy rock and quieter interludes. Next track, Heavy Metal Lover, had the audience become noticeably rowdy as intense, thrash styled bursts were interspersed with slower paced parts, high pitched vocals and comedic lyrics. The song saw Frankie getting hand waves going and Dan jumping off the drum riser. The strong melody line and chiming electric guitar parts of In Another Life ushered in a classic Hawkins styled guitar solo of high notes with searing vibrato. Choke on It was an urgent, pop punk and garage rock styled track with muted guitar lines and a sing along chorus which rounded out the rock parts of the album. To conclude the album set, Justin remained on the stage and playing an acoustic guitar, sang through the impressive falsetto of We Are the Guitar Men.

After a brief interlude, and with some more familiar costume changes, the full band soon returned to the stage to rip through a set of around ten classic tracks. Frankie teased the audience with a cow bell to kick off the great second set opener with One Way Ticket. Rufus was now in a black vest, Frankie in aristocratic lounge wear, Dan in street clothes and jacket with the ubiquitous Thin Lizzy t-shirt and then, of course, never to be outdone, Justin was in a full bodied, chest-revealing leopard skin jumpsuit.

Only one track from Last of Our Kind was played, the aggressive 70srock inspired Barbarian. The material from Permission to Land that alternated with a couple of songs from Pinewood Smile saw increased audience enthusiasm. Growing On Me had a quick solo from Justin venturing to the stage right whilst Dan riffed out atop the drum riser.

Both the drum heavy track Japanese Prisoner of Love and the rhythmically tight, very AC/DC sounding, Solid Gold worked well in delivering some Pinewood Smile material but it was Love Is Only a Feeling that had the audience engrossed from the opening note. On the now red-lit stage, Dan held his Les Paul aloft while Justin’s guitar solo at centre stage ended with him kicking a pick into the audience as Frankie casually played finger style bass, watching on with a wide grin. Givin’ Up added bouncing, sing-along fun and soon had Justin running around the stage again and a galloping cover of Radiohead’s Street Spirit had Dan utilising a Telecaster styled guitar for a brighter sound and included an enhanced segment of While My Guitar Gently Weeps. Get Your Hands Off My Woman roared along and allowed the audience to sing back the word ‘motherfucker’ with glee, milked with some unmatchable call and response falsetto antics from Justin, followed by a brief three piece band interlude. On returning, Justin performed upside down leg-splits on the drum riser whilst bright, white lights lit up the audience to an almost blinding level.

A one song encore of I Believe in a Thing Called Love brought the night to a suitable conclusion with pink stage lighting, audience sing-alongs and guitar solos played by both Dan and Justin. It also included Cal Kramer sitting in and jamming alongside Justin, whilst the rhythm section hammered out the classic song’s backing. The Darkness played a fantastic show tonight and while there were no adventures out into the audience by Justin this time around, the atmosphere was still captivating. It’s a pity this tour ended up being truncated by world events but for those who were lucky enough to be able to see this tour, they will surely attest it was a cracking night of top quality, hard rock music from one of the best bands in the business.