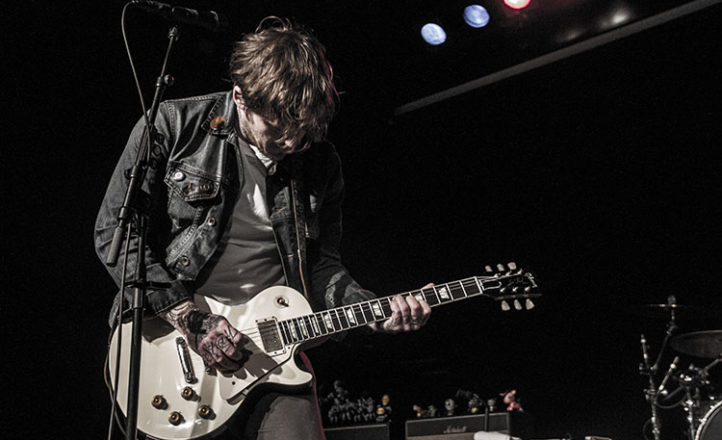 Eight years ago, a relatively unknown punk band from New Jersey played to a half sold Annandale hotel. Now on their fourth tour Down Under and five albums under their belt, hugely popular blues punk rockers The Gaslight Anthem were treating fans to their first ever ‘by request’ shows.

Opening the Sunday night show was tour mate Chris Farren, who warmed the crowd with his warming, soulful acoustic poetry. Armed with his acoustic guitar, Farren, also known as a founding member in Florida punk band Fake Problems, wore his heart on his sleeve. The crowd responded politely after each song, not the most raucous opening act but amazing none the less.

Due to take the stage at 9:15, but almost fifteen minutes late, The Gaslight Anthem hit the stage to huge applause. Opening with crowd favourite ‘The ’59 Sound’, this set the bar for the entire set, entirely chosen by those in attendance.

Following on with the title track of fourth album ‘Handwritten’ and the rockin’ ‘Old White Lincoln’. The enigmatic Brian Fallon is the charming and funny frontman,
with between song stage banter, jokes and regaling the audience with witty stories of past. An ongoing gag from the previous night’s show regarding his favourite icecream and a punter threatening violence was repeatedly remarked upon through out the night.

In its first outing in five years ‘Red At Night’ ripped through the crowd, followed by ‘High Lonesome’ and another old track, ‘I’da Called You Woody, Joe’. An acoustic slow version of ‘Great Expectations’ gave everyone a brief reprieve, before ’45’ picked the pace back up again.

A slow version of ‘Wherefore Art Thou, Elvis’ from the EP ‘Señor & the Queen’ kicked off a barrage of killer tracks, including ‘Say I Won’t (Recognize)’, ‘1930’ and the band brought out Chris Farren to help sing on the track he wrote, a cover of Fake Problems’ ‘Songs For Teenagers’.

Announcing that they would not be leaving the stage for a few seconds only to return for an encore, as almost every other band does,  The Gaslight Anthem went on with ballad and mass singalong ‘Here’s Looking At You, Kid’, the entire crowd singing as one. Closing the two hour set the same way they did all those years ago at the Annandale, with the anthemic ‘We’re Getting A Divorce, You Keep The Diner’, the rolling, rollicking, fast and punchy closer had fists pumping the air. Leaving the Factory, nothing could bring me down, except that it was Monday the next morning.